Moments ago, after denying the existence of a recording in which Corey Feldman named his abusers, police found the tape—vindicating Feldman. 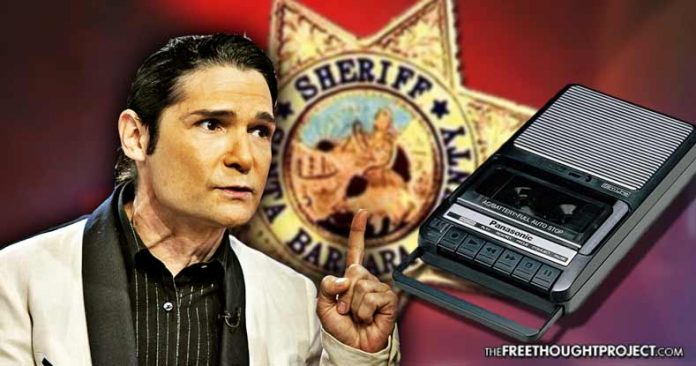 During an interview with the now disgraced host of NBC’s Today Show, Matt Lauer grilled Corey Feldman and accused him of never going to police with his story. However, Feldman quickly retorted and explained to Lauer that there is a recording in which he did tell police who abused him—during the statute of limitations—and they did nothing.

“I’ve told the police,” Feldman said. “In fact, if anybody wants to go back to 1993, I sat there with the Santa Barbara police, I gave them the names, they’re on record. They have all of this information but they were scanning Michael Jackson. All they cared about was trying to find something on Michael Jackson.”

This statement quickly became the subject of a massive controversy after Feldman went on to appear on Dr. Oz who called the Santa Barbara police to ask for this recording. Replying to Feldman’s claims that they had a recording of these names, the Santa Barbara police denied the existence of it. However, as TFTP predicted at the time, this was not true. And, moments ago, the recording of Corey Feldman naming his abusers to the police was found.


“In a container which included the original reports from the investigation, the Sheriff’s Office located some detective working copies of audio recordings made during the investigation. A copy of Mr. Feldman’s interview was located,” a statement read from Kelly Hoover, SBCSO’s Public Information Officer.

As FOX News reports, Santa Barbara County Sheriff’s Office public information officer Kelly Hoover told Fox News on Tuesday night in an emailed statement, “Following the recent inquiries into the Sheriff’s Office interview of Mr. Feldman in 1993, the Santa Barbara County Sheriff’s Office conducted an additional review for any stored items remaining from the Michael Jackson investigation. In a container which included the original reports from the investigation, the Sheriff’s Office located some detective working copies of audio recordings made during the investigation. A copy of Mr. Feldman’s interview was located. The recording is being turned over to the Los Angeles Police Department. Due to the fact that this case involves the alleged sexual abuse of a child, we are unable to comment further and any documentation or evidence related to this case is exempt from release.”

To be clear, just two months ago, the Sheriff’s office said the following after they were made aware of Feldman’s claims: “We are aware of the statements that Mr. Feldman is making regarding an investigation in 1993. Our records do not indicate that he named any suspects.”

The existence of this tape could prove to be paradigm shifting in the investigation into Hollywood’s child sex trafficking ring. It proves that police had the information they could have used to launch an investigation into multiple child predators and they did nothing.

As Feldman predicted last month, the LAPD dropped his investigation almost as soon as he reported it to him.

“The alleged accordance is out of statue and Robbery/Homicide have no avenues to pursue the case. However, the LAPD applauds Mr. Feldman for coming forward, as an out of statute assault report could potentially bolster any current and forthcoming case as it creates a pattern of behavior. The latest rash of sexual assault reports are particularly troubling and the LAPD encourages and will gladly take a report from anyone who feels they may be a victim,” an LAPD spokesperson said in a statement.

However, it appears that the only reason this case is outside of the statute of limitations is due to police not acting on it when it was covered.

Either this shows the police were entirely negligent in investigating the accusations made by a child victim of sexual assualt—or, they were complicit in covering up for the abusers. Either way, those responsible for allowing this information to be kept covered up need to be held accountable for allowing predators to get away.