Today at 4:47 pm by PurpleSkyz

Today at 4:43 pm by PurpleSkyz

Pictures showing the Great Garbage Patch in the Pacific Ocean have made it clear that plastic ocean trash has become a monumental problem. A staggering eighty percent of the trash in this circling whirl of junk is plastic. This horrid environmental pollution takes over an entire ecosystem, causing the death of countless fish, whales, sharks, sea lions, birds, and even microscopic plankton. 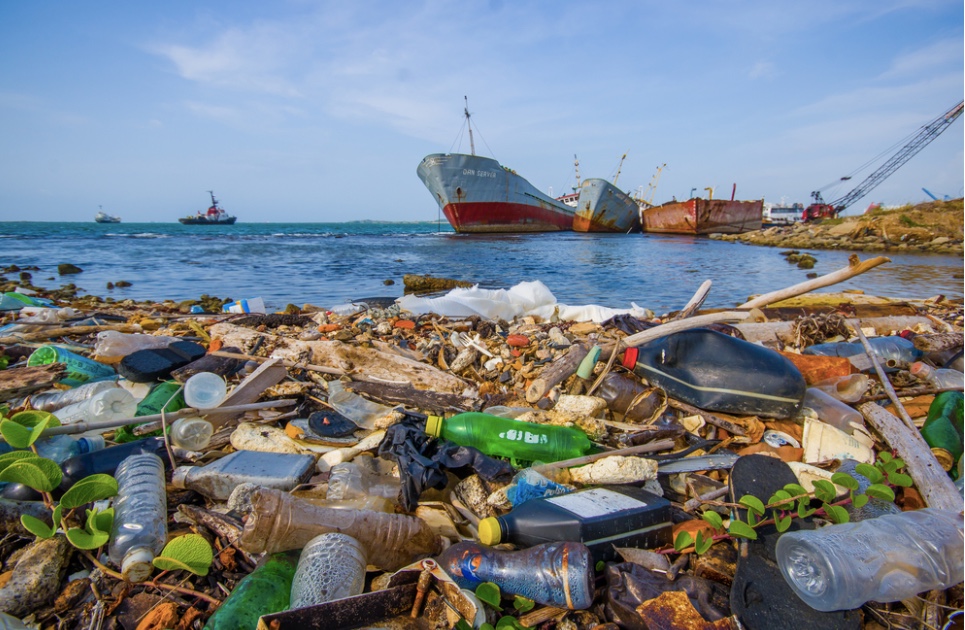 Single use containers make up a large part of the trash littering our oceans. Image: Frontiers
Fortunately, more than 200 countries signed a U.N. resolution in Nairobi on Wednesday to eliminate plastic pollution in the sea, a move some delegates hoped would pave the way to a legally binding treaty.
The overwhelming environmental damage of plastic trash is so serious, that if current rates of pollution continue unchecked, there will be more plastic than fish by 2050, said United Nations Environment Programme (UNEP).
The petition puts forth strong measures to curb plastic trash, which has reached an epic Eight million tonnes, and includes bottles, packaging and other waste. What’s more depressing is that more than 90 percent of plastic trash isn’t recycled, even though it could be.
“We all knew there was a rapid and extreme increase in plastic production from 1950 until now, but actually quantifying the cumulative number for all plastic ever made was quite shocking,” says Jenna Jambeck, a University of Georgia environmental engineer who specializes in studying plastic waste in the oceans, and discovered the sheer weight of the issue in a study meant to find out just how much plastic is circulating in our environment.

Jambeck said that “this kind of trash would break any system.”
“There is very strong language in this resolution,” Norway’s environment minister, Vidar Helgesen, told Reuters, but it is not legally binding, so it is completely an “at will” resolution. This means that countries who sign it may act aggressively to end the problem, or do it as a press stunt to make good with environmentalists who have been sounding the alarm bells about this problem. Some say that the current resolution could lead to a legally binding contract among nations.
Scientists are hoping for a binding international agreement since the impact of ocean plastics on biodiversity, ecosystem services, food security and human health make it “a global threat.”
“Plastic is not constrained by national boundaries, because it migrates via water and air currents and settles in benthic sediments,” says an article in the Proceedings of the National Academy of Sciences.
“More than 50 percent of the ocean’s area sits beyond national jurisdiction, including the infamous ‘garbage patches‘ in oceanic gyres where plastic accumulates.”
A large portion of it is from single use containers like cups, plates, forks and knives, as well, that we simply toss aside, never imaging that these objects end up in our oceans.
This week’s resolution reaffirms the commitment under the UN Sustainable Development Goals to “prevent and significantly reduce marine pollution of all kinds, in particular from land-based activities, including marine debris and nutrient pollution.”
Let’s hope the resolution inspires action that can solve this incredible problem. In the meantime, we can do our own part to eliminate plastic trash by reusing containers, composting trash instead of throwing it in plastic trash bags, recycling them, or simply opting for non-plastic options like reusable bags or even carrying our own green cutlery.
The average American produces about 130 pounds of trash a month, and an article in the journal Nature estimates that global solid-waste generation will triple, to 11 million tons a day, by 2100. Trash production in other countries is much less, but still staggering.
We can also simply use less, so that we have less to throw away, by curbing our consumer habits