DID THE MARS ROVER FIND PROOF OF A WAR ON THE ‘RED PLANET’?

NASA’s Curiosity Rover, also often known as the Mars Rover took a picture that’s riled up space conspiracy theorists. They claim that this is “100% proof” that there was once a war on the Red Planet.
Conspiracy theorists claim that an object spotted in a photograph taken by NASA’s Curiosity Rover on Mars is evidence of a past war on the planet. Others, however, claim the object it is quite simply, a rock. Take a look a the photo below: 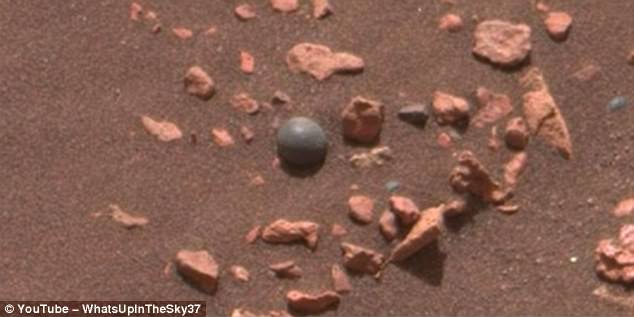 Conspiracy theorists color-enhanced the image taken by the Curiosity Rover, and now say that the image shows a round object, that they claim is a metal cannonball.

Scott C. Waring claims the ball is “100% evidence” of a war on Mars and he suggests it was fired at the planet in an attempt to destroy Mars’ atmosphere.

A video posted on YouTube by channel WhatsUpInTheSky37 shows the image with an explanation as to why it is believed that this is a cannonball.  In the video, the image has been color enhanced to make the ball look grey against the red rocks. Commenting on the video, Scott C. Waring, who runs the site UFO Sightings Daily, said: “This metal ball is perfectly formed and about the size of a softball here on Earth. Guess what? That also matches the size of a cannonball.”
Waring added:

“This projectile is sitting on the surface above all the wrecked stone structures around it. Fragments of a once civilization is sitting scattered in tiny pieces around this cannon ball.” He added:  “I do believe these balls and millions of others were deliberately shot at Mars from space all at once to destroy their atmosphere, burn it away. What I mean is a large enough man-made meteor shower could strip Mars of its atmosphere and thus, destroy all or most life on the planet surface.”

A quick perusal of Waring’s website shows that he also questions the moon landings.  So here’s a puzzler: how could we humans have a space war and shoot cannonballs at Mars to destroy their atmosphere if we haven’t even been to the moon?
The Daily Sheeple

Posts : 340
Join date : 2016-09-29
Age : 58
Location : EARTH-UNIVERSE
Naah! How about, if we can accept it graciously that we cannot send any of our machines / rockets or rovers that far at all? Forget about MARS, we are still uncertain if we went to the Moon or not. If we did, then the evidence is all mirky. If we didn't, then our FAKERY was too tardy too!