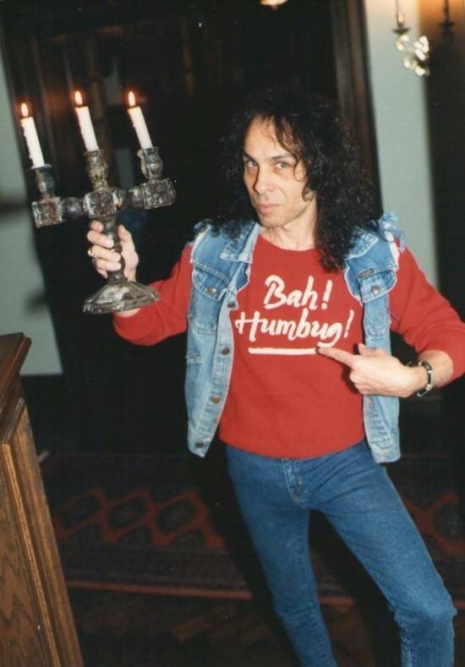 For the benefit of future generations, the 1988 cookbook Rock ‘N’ Roll Cuisine collected the recipes for Rod Stewart’s “SANDWHICH [sic] FOR HANGOVER,S [sic],” George Michael’s risotto, Ian Astbury’s “dangerously spicy” chickpeas, Debbie Harry’s nutty shrimp, Ozzy’s chicken curry, and so on.
Ronnie James Dio’s contribution, set in blackletter type, was something like the bill of fare for a feudal baron’s Christmas feast: roast suckling pig with bread sauce, served with cups from the wassail bowl. Not just any wassail bowl, either, but “The Wassail, prepared by Charles Dickens for the entertainment, on Christmas Eve, at the Charity of Richard Watts, Rochester, Kent, England, 1854.” People needed this kind of hot, sugary booze back then. I bet a few good slugs out of this here wassail bowl could make a person forget all about the symptoms of smallpox, typhus and the measles, not to mention the cares of the 10-hour factory shift.

Quote :Wassail Bowl
1 quart ale
1/4 ounce ground nutmeg
1/4 ounce grated ginger
1/4 ounce grated cinnamon
1/2 bottle sherry
2 slices toasted bread (1/2 inch thick)
1 lemon, juice & peel
sugar to taste
2 well-baked apples
Put ale in sauce pan and cook gently till it foams, then stir in the spices, add the sherry, lemon peel and juice with sugar. When sugar is dissolved, set pan aside on stove for twenty minutes to infuse. Then warm up, pour into punch bowl, let the toast and apples float in this and serve in cups.They say it tastes best if you’re in the eye-bleeding phase of yellow fever and your eight-year-old just got laid off at the blacking factory. Below, Dio, Tony Iommi and Rudy Sarzo go a-wassailing on this ridiculous Christmas album.