Archaeologists in California Unearth a Large Sphinx—From the Set of ‘The Ten Commandments’ Sat Dec 09, 2017 2:54 pm 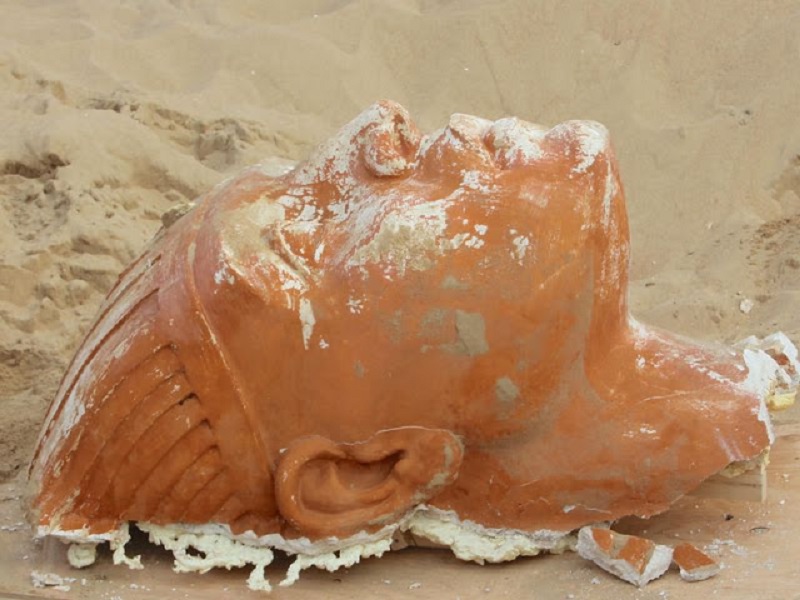 by Brigit Katz; smithsonian.com
Director Cecil B. DeMille gave the order for the entire set be buried beneath the sand after shooting on the blockbuster concluded
Archaeologists digging amidst the dunes of California’s Santa Barbara County recently unearthed a miraculous find: an intact, 300-pound sphinx head. Just what was a 300-pound sphinx head doing on the Western coast of the United States, you might ask?
As Laura Geggel reports for Live Science, the relic in question hails not from the deserts of ancient Egypt, but from the set of The Ten Commandments, Cecil B. DeMille’s pioneering 1923 Hollywood blockbuster.
Back in the ’20s, DeMille, towering figure figure of Hollywood’s Golden Age, set out to create an epic retelling of the biblical story of Moses. Part of the silent, black-and-white film was shot in the Guadalupe-Nipomo Dunes, in an attempt to mimic Egypt’s sandy landscape.
According to a press release from the Guadalupe-Nipomo Dunes Center, which led the excavation, DeMille commissioned an enormous set that stretched 12 stories high and 800 feet wide. This grand construction, which at the time was one of the largest movie sets ever built, featured a colossal gate, statues of pharaohs, and 21 sphinxes made from plaster of Paris.
It took 1,300 craftsmen, 25,000 pounds of nails and 250 tons of plaster to build the set, according to Erik Olsen of Quartz.. But after filming wrapped, DeMille ordered his creation to be buried within the dunes, for reasons that are not entirely clear.
Doug Jenzen, executive director of the Dunes Center, tells Olsen that the director may not have had enough money left in his budget to dismantle and move the set. It is also possible that DeMille—“ a control freak known to fret over the smallest details,” as Olsen writes—simply did not want his set to be repurposed by another director in the future (a common cost-cutting device employed by Hollywood studios).

Whatever the case may be, The Ten Commandments set remained submerged beneath the sand for nearly a century. In the 1980s, the filmmaker Peter Brosnan set out to find the Hollywood relic, but quickly hit a wall; the Guadalupe-Nipomo Dunes are a protected area and it took decades of wrangling for Santa Barbara County to let him conduct an excavation. In 2012, Brosnan’s team unearthed part of a sphinx that once adorned the film set. But the relic crumbled when archaeologists tried to remove it from the ground.
When Dunes Center archaeologists returned to the site in early November, they were looking for the remainder of a sphinx body left behind from the previous dig. The team was “shocked” to discovered a second sphinx head, according to the press release.
This time around, archaeologists extracted the sphinx using a foam spray that strengthened the interior of the object. While the sphinx was fragile, it was in relatively good condition; “extremely intense” paints that were applied to the sphinx to make it stand out in black-and-white were still visible to archaeologists, Jenzen said in the statement.
DeMille’s sphinx may not be an authentic Egyptian artifact, but Jenzen argues that the discovery is still historically significant. “Movie sets just don’t exist anymore from that Golden Age of Hollywood,” he tells Olsen​ for Quartz. “This represents an opportunity to save a piece of American history before it’s destroyed.”
The set has indeed been eroding over time, and the Dunes Center is trying to raise additional funds to conduct further excavation work. Once the sphinx head is restored, it will be displayed at the Dunes Center museum in Guadalupe.
Though DeMille buried all traces of his 1923 blockbuster, he never quite left the story of Exodus behind. In 1956, the director decided to remake The Ten Commandments as a four-hour opus shot in Technicolor—this time around, the budget was even bigger and the set even grander.