OUT OF MIND » TRUTH IN CONSPIRACY THEORIES? » HISTORIES MYSTERIES » ‘Santa’s Bone’ Confirmed to be from Time of St. Nicholas

‘Santa’s Bone’ Confirmed to be from Time of St. Nicholas 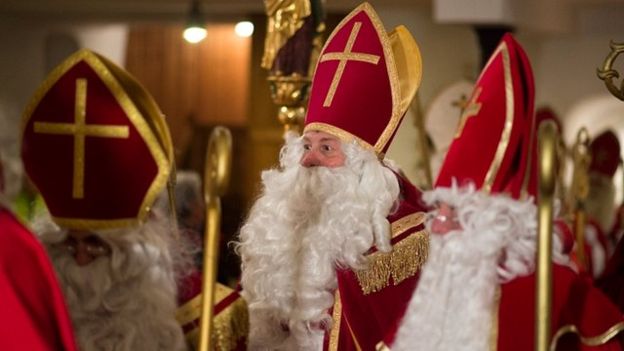 By Sean Coughlan
BBC News
A fragment of bone claimed to be from St Nicholas – the 4th-Century saintly inspiration for Father Christmas – has been radio carbon tested by the University of Oxford.
The test has found that the relic does date from the time of St Nicholas, who is believed to have died about 343AD.
While not providing proof that this is from the saint, it has been confirmed as authentically from that era.
The Oxford team says these are the first tests carried out on the bones.
Relics of St Nicholas, who died in modern-day Turkey, have been kept in the crypt of a church in Bari in Italy since the 11th Century.
Authentic age
But the popularity of the saint, and the associations with Christmas, have seen many fragments of bones being taken to other locations, raising questions about how many of these are authentic.
The tests in Oxford have been carried out on a fragment of pelvis, which had been in a church in France and is currently owned by a priest, Father Dennis O’Neill, from Illinois in the United States. 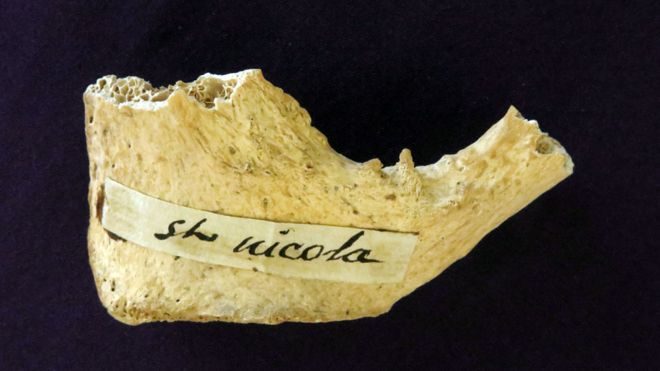 The bone claimed to be from St Nicholas has been radio carbon tested for the first time
The radio carbon dating tests, for the Oxford Relics Cluster at Keble College’s Advanced Studies Centre, have confirmed that the bone is from the correct era for St Nicholas.
Prof Tom Higham, a director of the centre, says this is unlike many such relics which often turn out to be much later inventions.
“This bone fragment, in contrast, suggests that we could possibly be looking at remains from St Nicholas himself,” says the Oxford archaeologist.
There are hundreds of other bones claimed to be from St Nicholas, including a collection in a church in Venice.
And the researchers now want to use DNA testing to see how many bones are really from a single individual – and how many might be linked to the bone tested in Oxford.
The Oxford team are interested in whether the part of the pelvis they have tested matches the relics in Bari, where the collection does not include a full pelvis.
Dr Georges Kazan, co-director of the centre at Keble College, says: “It is exciting to think that these relics, which date from such an ancient time, could in fact be genuine.”
For the researchers, this might seem like Christmas has come early. But the findings cannot provide evidence that this is definitely from the real St Nicholas.
“Science is not able to definitely prove that it is, it can only prove that it is not, however,” says Prof Higham.
Sean Coughlan
BBC News

OUT OF MIND » TRUTH IN CONSPIRACY THEORIES? » HISTORIES MYSTERIES » ‘Santa’s Bone’ Confirmed to be from Time of St. Nicholas