OUT OF MIND » CONSPIRACY THEORIES & ENDURING MYSTERIES » HISTORIES MYSTERIES » The enigmatic ancient ‘city’ of Midas, built by the Phrygians almost 3,000 years ago

The enigmatic ancient ‘city’ of Midas, built by the Phrygians almost 3,000 years ago

It’s an ancient—3,000-year-old city—that isn’t a city. It is said to be the eternal resting place of King Midas, the mythical character remembered in Greek mythology for his ability to turn everything he touched into gold.
Located in the Turkish province of Eskisehir there is an archaeological site dubbed as Yazilikaya—which literally means engraved rock. However, it is also referred to as the City of Midas.
It is believed that the Phrygians built it sometime between the 8th and 7th centuries BC, although archaeologists suspect that it may be much older.
The most curious thing is that, although it is called a city, there were never houses there.
Rather, it was an ancient religious center of the time. 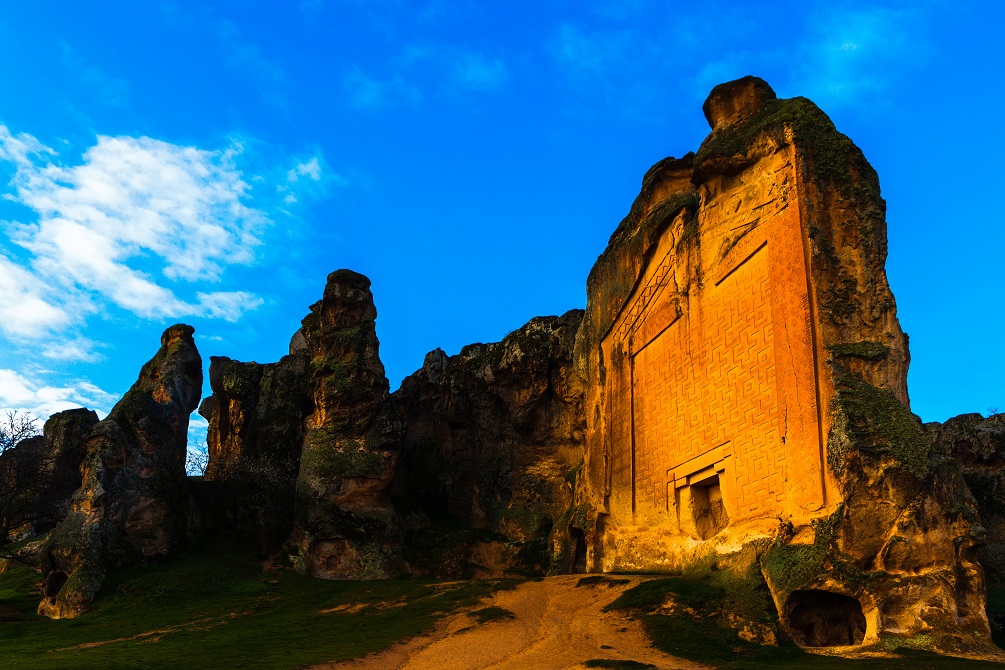 The so-called Ancient city of Midas. Image Credit: Shutterstock
Looking back in history
The Phrygians were an ancient Indo-European people who, according to Herodotus, inhabited the south of the Balkans.
In the 8th century, they emigrated to Anatolia, where they founded their capital at Gordio (in which centuries later the famous episode of the cut of the Gordian knot by Alexander the Great took place).
The oldest mythical king of the Phrygians was Midas, a character from whom there is no archaeological evidence, but who appears in later Greek myths as the man who everything he touched, turned to gold.
However, there are references to a king that ‘fits his descriptions’ in Assyrian sources from the eighth century BC, which portray him as an ally of Sargon II in 709 BC.
Interestingly, successive Phrygian kings were called Midas or Gordias, which may indicate that Midas may have been a title, and not a name.
Around the same time, the Phrygians built their capital in Gordio they installed their religious center in Yazilikaya.
It is not known for sure if when they arrived, the caves, galleries, and stairways were already there.
Scholars are unable to verify it was already a sacred place when the Phrygians got there, or if that aspect was given by the new inhabitants.
The fact is that they turned it into a kind of sanctuary and began to adorn it with new constructions, excavating and inscribing new elements into the surrounding rocks. 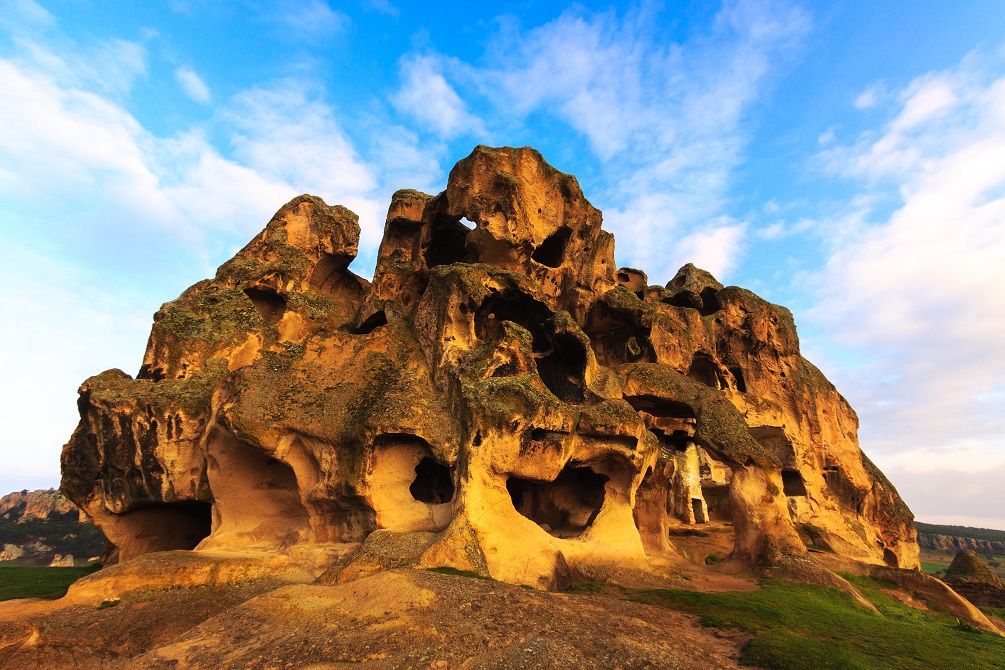 Phrygia Yazilikaya and the cave houses in ancient Midas City, Eskisehir, Turkey. Image Credit: Shutterstock
The Tomb of ‘Midas’
One of the best-known monuments of the site is the so-called Tomb of Midas.
It is a monument, which has never been proven to be a tomb, and is composed by a facade dug in the rock 20 meters high by 16 wide.
It features a false door, today partially destroyed by looters, who must have thought that something had to be behind it, and an inscription on the upper part, perfectly legible and consisting of a dedication.
Written in ancient Phrygian, the inscription says; “by Ates, son of Arkias, to Midas.”

On the walls of the lower niche, there is also a small inscription that says Matar (mother) and probably refers to the goddess Cibeles, whose image may have once stood there.
Just a legend?
What the world Midas refers to remains a mystery today.
If we pay attention to the sources, Midas was buried under a massive tumulus near Gordio.
Interestingly, excavations carried out in the 1990s did not find a single trace of burials there, nor in any other place in the area for that matter.
However, one of the most fascinating, and weird things is that, if you ascend all the way to the highest point of the city, you’ll see hundreds of stairs dug into the surrounding rocks, leading to dead ends or simply disappearing under the ground.
Archaeologists have found a number of scattered altars and stepped thrones.
Many scholars believe these are ceremonial paths, which played an important role in the religious cult of the area.
The stairways that were crafted leading literally into the ground point towards tunnels and underground chambers, interconnected among themselves, which some archaeologists consider were used as ‘cisterns’ to store water, although several authors believe they had a different, more profound reason.
Most of these passageways are blocked by land and rocks which have accumulated over the centuries and have never been excavated.
Underground cities? 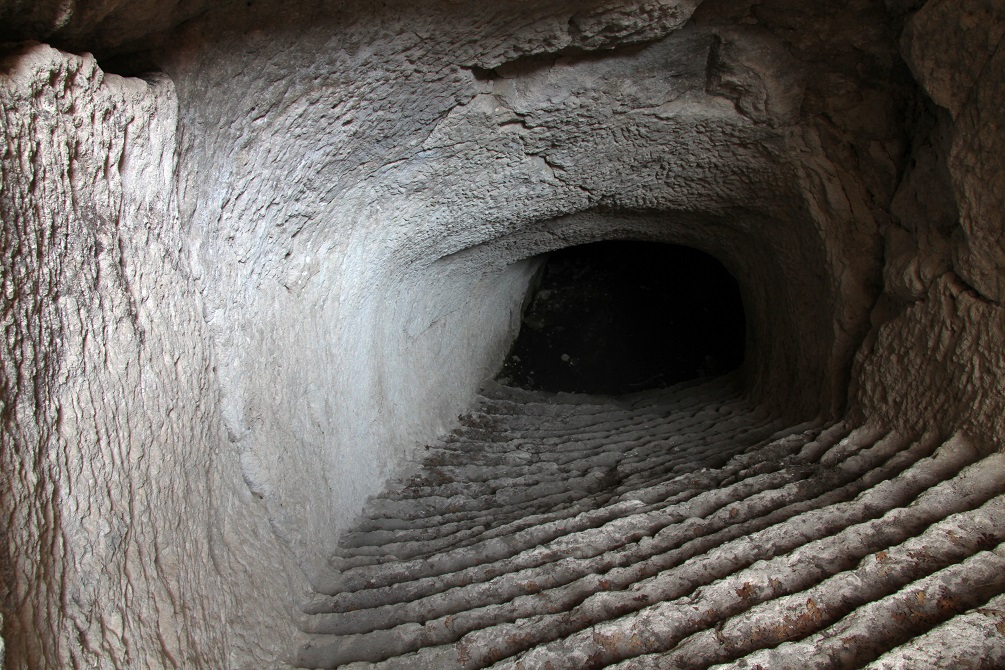 The ancient ‘tunnels’ which lead to the underground. Image Credit: Shutterstock

Despite the fact that there are numerous authors who believe there may be some kind of connection to the numerous underground cities found in Turkey in recent decades, let us not forget that the Phrygians—like many other ancient cultures—believed that their gods lived inside the mountains, or inside of the Earth, and the tunnels leading inside were passages to the divine underworld.

OUT OF MIND » CONSPIRACY THEORIES & ENDURING MYSTERIES » HISTORIES MYSTERIES » The enigmatic ancient ‘city’ of Midas, built by the Phrygians almost 3,000 years ago