The first time raised eyebrows, but the second?
Thanks for the heads up, L.  ~ BP 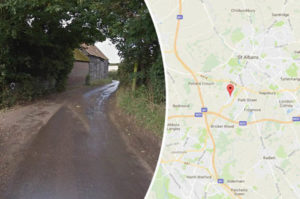 December 11, 2017
BBC Reports: A pilot has died after a light aircraft crashed moments after taking off. The plane came down in a field off Chiswell Green Lane at Chiswell Green, Hertfordshire. Hertfordshire Police said it was called at 12:33 GMT by the ambulance service to reports of the crash. The pilot, in his 50s, was the only person on board, the force added. The Air Accidents Investigation Branch has launched an investigation into the crash. A spokesman for Hertfordshire Fire and Rescue said the light aircraft had reportedly “gone down on take-off”. “Two fire engines and a service unit attended and made the aircraft safe,” he added.
Question is now with 2 plane crashes near and on the Rothschild estate of Buckinghamshire, UK, is the Rothschild family being targeted by a special military operation. This plane crash in Hertfordshire, UK which is only about 40 miles from the Rothschild Estate in Buckinghamshire, UK, are only incidents that are about 2-3 weeks apart.
The question is this a military operation going down in England targeting the Rothschilds, as you remember towards the middle and end of November…That Q on 4Chan basically warned the Rothschilds that they are not safe and can even hear them breathing. Of course the thing with this crash we aren’t getting a name of the person killed in the wreckage near the Rothschild’s estate today in Hertfordshire, UK.
Source

Admin
Posts : 106837
Join date : 2012-01-04
Location : Woodstock Nation
I am still waiting to see the casualty list from the last crash. Has not even been mentioned since it happened.

Posts : 1417
Join date : 2014-01-03
Location : England
They did publish the casualty list Purpz....two muslims in one aircraft, one pilot and trainee in another. They have not yet said who was in the wrong etc

Posts : 1417
Join date : 2014-01-03
Location : England
I doubt very much if this is military or covert in any way, if the military wanted to issue a warning they can make a better job of it than this. When blair was in office they did it twice and only those who know the signs noticed

Admin
Posts : 106837
Join date : 2012-01-04
Location : Woodstock Nation
Oh well I must have missed it if it was reported here. Well maybe if these guys keep practicing they will finally be able to hit the target and rid the planet of a couple of Rothschild's!