OUT OF MIND » THE INSANITY OF REALITY » VACCINE TRUTHS: MEDICAL INDUSTRY LIES » Robert F. Kennedy, Jr. Throws Down the Gauntlet, Makes Major Announcement That Could Shake Up The Vaccine Industry

Robert F. Kennedy, Jr. Throws Down the Gauntlet, Makes Major Announcement That Could Shake Up The Vaccine Industry

Robert F. Kennedy, Jr. Throws Down the Gauntlet, Makes Major Announcement That Could Shake Up The Vaccine Industry As We Know It (With Video) 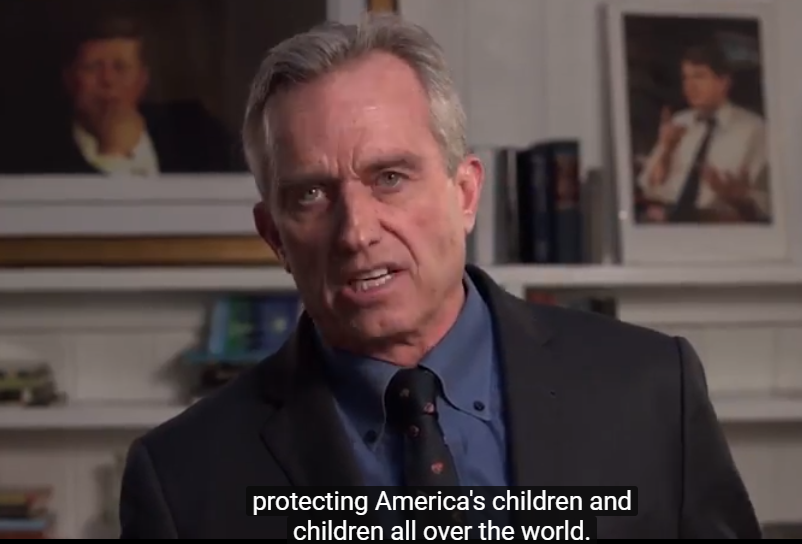 The vaccine industry has been able to keep a tremendous amount of information hidden from its customer base, and the general public for that matter, for years.
But now the truth is finally coming to light: regardless of whatever benefits they may provide, today’s vaccines are being implicated for causing harm across a wide spectrum of people in the United States, who are suffering without the ability to hold those in power responsible.
The numbers don’t lie: nearly $3.6 billion in compensation has been paid out to vaccine injury victims through a court-created system established in 1986, when vaccine makers were officially granted legal immunity from being sued, even in cases where their products have caused serious harm.
According to some estimates, including one cited by the World Mercury Project, as little as 1% of vaccine injuries are reported each year – in other words, this could be a far bigger problem than most people realize.
It’s because of statistics like these, and the growing numbers of parents coming forward with their own vaccine injury stories, that well known public interest attorney Robert F. Kennedy, Jr. has officially decided to make a major shift in his career priorities going forward.


And if his past history of legal success is any indication, it could be a major turning point for one of the most overlooked (and under-studied) health epidemics in the country.
RFK Jr. All-In for Vaccine Safety Movement
Speaking in a video on the World Mercury Project’s Facebook page, Kennedy, Jr., whose proposed vaccine safety panel on behalf of President Donald Trump was never green-lighted, has decided to take matters into his own hands, and says he will apply all of his energies toward cleaning up the vaccine industry.
“For 30 years I’ve been successfully fighting the biggest bullies on the American political landscape, the oil companies, the coal companies, the chemical companies, big agriculture and the other big polluters,” he says in the video, which can be seen in full below.

“But I’ve decided now to take a hiatus from those battles and apply all of my energies to what I consider the most important battles for protecting America’s children and children all over the world.”
Kennedy, Jr.’s new target will be the vaccine industry, which has strayed far from its original mission and is now “above the law” in many ways, as Kennedy alludes to in the video.
It starts with accountability from regulatory agencies, which Kennedy, Jr. said is greatly lacking.
“The way that the industry has been able to continue this conduct, this criminal conduct, for so many years is because they’ve been able to escape scrutiny,” Kennedy said.
“The regulatory agencies have been captured by the industries that they’re supposed to regulate. The government officials, Congress have (all) been corrupted by huge influxes of money from the pharmaceutical industry…”
“And now, the industry is going state-by-state across the country to try to get legislation passed to remove that last barrier, the parents, the mothers of these children, and taking away from them their ability to make healthcare decisions for their children.” 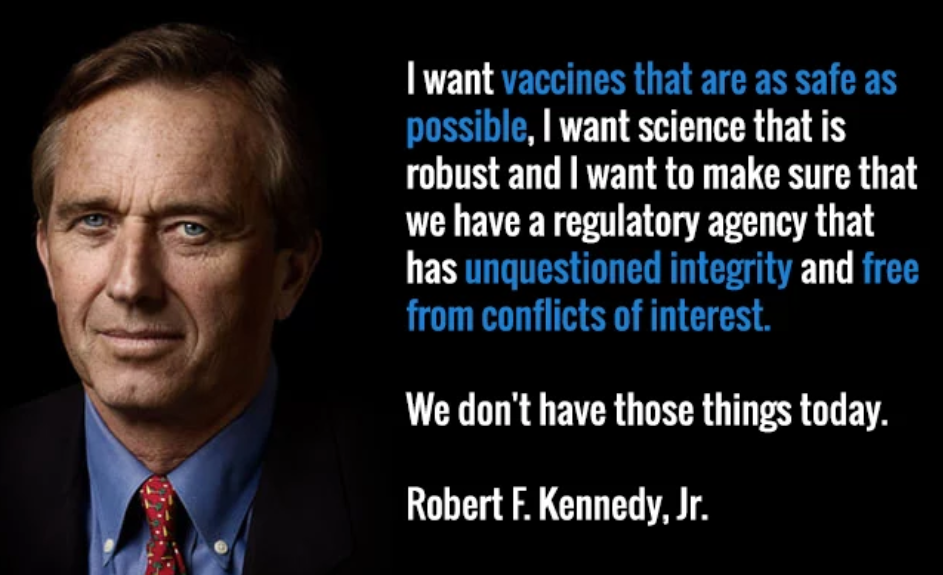 RFK, Jr. Project Kicks Off Fundraising Campaign
In order to support this new endeavor, the World Mercury Project, a grassroots roots organization chaired by Kennedy, Jr. with the goal of removing and potentially even banning the world’s second most toxic substance, is now accepting donations for its new Vaccine Safety Project.
“Robert F. Kennedy, Jr. and the World Mercury Project want vaccines to go through the same rigorous approval process and testing as all drugs,” the project’s Indiegogo page states.
“The government admits that only 1% of vaccine injuries are reported. That would translate to as many as 6 million Americans possibly injured by vaccines each year. Our children deserve better.”
As part of the undertaking, the World Mercury Project and RFK, Jr. released their ‘Six Steps to Vaccine Safety,’ which they are hoping to institute in order to transform Washington, D.C.’s corrupt vaccine safety system:
1. Subject vaccines to the same rigorous approval process as other drugs – While drugs cause tens of thousands of deaths each year, and would rank 9th among all causes of death if overdoses were included, they are still subject to higher safety standards than vaccines.
Considering that vaccines are administered in growing numbers to the youngest and most at-risk members of society (infants and children), the importance of this change cannot be overstated.
2. Mandate mandatory reporting of adverse vaccine-related events –
Vaccine-related injuries have led to about $3.6 billion in compensation from the government-created VAERS (Vaccine Adverse Safety Reporting System) since 1986.
The Project hopes to automate the VAERS and VSD (Vaccine Safety Datalink) systems to shed more light on the growing numbers of vaccine injury victims.
3. Ensure all involved with Federal vaccine approvals and recommendations are free from conflicts-of-interest – These are rampant in the industry, including the CDC which has has routinely allowed scientists with conflicts-of-interest to serve on influential advisory committees making recommendations on vaccine policy, as pointed out in a recent House Government Reform Committee staff report published this past February.
4. Re-evaluate all vaccines recommended by ACIP (the CDC’s Advisory Committee on Immunization Practices) prior to adoption of evidence-based guidelines –

Critics say the current vaccine system has not been adequately tested for safety, especially with children and the growing vaccine schedule (up to 73 doses by the time kids reach age 18 in the U.S.).
5. Study what makes some individuals more susceptible to vaccine injury – Considering the amount of catastrophic vaccine injury stories that have flooded the Internet and the aforementioned vaccine injury payout numbers, this is concerning for many parents.
6. Support fully informed consent and individual rights to refuse vaccination – While mandatory vaccine supporters push for herd immunity, people are being injured in the process, critics say.
As vaccine choice advocates argue, where there is risk, the freedom to refuse must be protected.
Health Issues Piling Up in American Kids – Are Vaccines to Blame?
One of the biggest obstacles to vaccine safety improvements is the ongoing argument between “pro-vaccine” and “anti-vaccine” sides. The argument has been simplified to discourage constructive debates.
But as Kennedy’s project notes, their new undertaking is not “anti-vaccine” but “pro-vaccine safety,” seeking to address controversial issues that haven’t seen the light of day in Congress due to stereotypes and misinformation.
For more info on the project (including alarming statistics on children’s health problems in the United States that have arisen “in lockstep” with the growing vaccine schedule), check out the full post from the World Mercury Project.
You can also watch RFK Jr.’s major announcement in the video below. Please be sure to share this article and video with anyone you could use more education on the growing issue of vaccine safety:

Re: Robert F. Kennedy, Jr. Throws Down the Gauntlet, Makes Major Announcement That Could Shake Up The Vaccine Industry Sat Dec 16, 2017 3:19 am

He must have a death wish... or he's just making waves that he knows will mean nothing.

Re: Robert F. Kennedy, Jr. Throws Down the Gauntlet, Makes Major Announcement That Could Shake Up The Vaccine Industry Sat Dec 16, 2017 9:22 am

I  worked in pharma for 4 years in the early 70's and when I would read the Physicians Desk Refer. that was all I needed to see to make the decision to NOT let any of these drugs come into contact with any future children I might have and went through hell and high water to make that so when I did have kids.
My twins are 36 now so it was way easier to handle this back then and I merely forged the med card to the school. There is a 10 year gap between my next set of kids and though I still was able to avoid vaxxing the kids  it was much harder. Now it is impossible. All docs come straight from the doctors to the schools at least where I am located.
So when a member of Camelot joins what for me has been almost a life long crusade I am more than grateful. If only all of this interest started before my grand kids were compromised so that I had more back up to convince their parents I was NOT a nutter. My tongue has been bloody many times when I am being told of the many health issues they have. So far no autism but law of averages will change that as more grand kids arrive I suppose.

OUT OF MIND » THE INSANITY OF REALITY » VACCINE TRUTHS: MEDICAL INDUSTRY LIES » Robert F. Kennedy, Jr. Throws Down the Gauntlet, Makes Major Announcement That Could Shake Up The Vaccine Industry