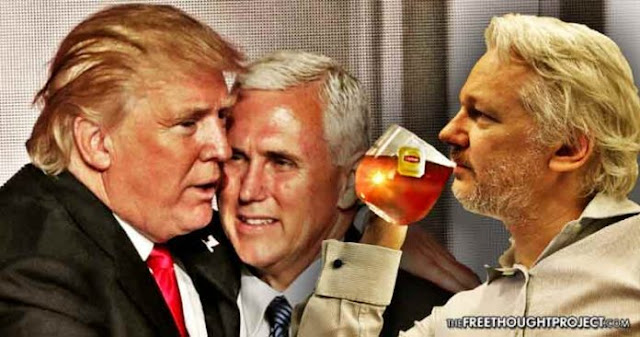 (Jay Syrmopoulos) Washington, D.C. – In a tweet this morning, WikiLeaks founder, Julian Assange, made a prescient observation that the ongoing deep state coup against President Trump is an operation by establishment forces to unseat Trump and replace him with Vice President Mike Pence. Assange noted that Trump’s political capital has “been openly looted for months now by GOP, CIA, Netanyahu, Goldman Sachs, etc.”

This, of course, was done as means of severing Trump from his political base, which largely opposes CIA interventionism, Zionism, and globalist banking cartels. The idea behind it being that when Mueller moves to recommend impeachment, Trump will have strayed so far from the positions that got him elected that there will be a minimal public outcry in his defense.
This follows chatter earlier this year that some saw Mike Pence as “the Deep State’s insurance policy.”

In fact, Wikileaks’ Assange, tweeted back in March, that there was a plan afoot by Hillary Clinton and her loyalists within the Intelligence Community to force a “Pence takeover.”

As the Washington Post’s Josh Rogin observed back in March:
“Pence is seen by many in Washington as a figure who might stand up for the traditionally hawkish views he espoused while in Congress, a proxy of sorts for the GOP national security establishment.”

Assange’s position about the Pence coup has been acknowledged by independent journalist, Mike Cernovich, who broke the Susan Rice unmasking story, and has previously said that inside sources have confirmed that Pence is working to remove Trump in a deep state coup.
Back in August, Cernovich reported having inside information from White Houses sources that claimed Pence was working behind the scenes to count Republican votes in Congress for a possible impeachment vote to remove Trump. T
Rumors of an internal coup began during the election campaign when it was reported that Pence began plotting a coup after a tape of Trump boasting about groping women was made public.
The tape’s release, one month before the election, caused dissent among senior Republicans and led to several withdrawing their endorsements and calling for Trump to withdraw as the party’s presidential candidate.
Pence, known as a deeply religious man, was said to be “beside himself” over Trump’s comments on the tape. Pence’s wife Karen was reportedly disgusted and called Trump “reprehensible—just totally vile,”according to the Atlantic.
Sources close to the campaign have claimed that the situation was so serious that Trump held a meeting to determine what step to take next.


Reince Priebus, who would become Trump’s first Chief of Staff, was reportedly bombarded with calls from party officials and donors pleading with him to get rid of Trump, with some suggesting replacing him with Pence and making Condoleezza Rice his running mate.
Priebus reportedly told him he would suffer a huge defeat if he did not drop out.
At the time, RNC lawyers attempted to find a legal mechanism by which they could remove Trump as the Republican candidate, while a group of billionaires attempted to offer Trump $800 million in order to voluntarily quit the race, according to the Atlantic.
The fact of the matter is that Trump, while considered an outsider to politics, has operated as a consummate politician by catering to many of the special interest groups he ran on not allowing to have influence in his administration—which may ultimately be his undoing if his base abandons him as Mueller moves toward a potential impeachment.

Trump won't be impeached, although that is what the 'left' would like to see happen- Pence is another shill for the NWO, and Trump knows it, he's just biding his time before he basically drops the hammer on them all- Mueller is a joke, no collusion, no case, and is another shill for the Clintons, and the Clintons are the one that put Meuller in place to railroad Trump, BUT, is a diversion to be able to hang the Clintons, so Mueller will try to save his own ass, along with Sessions, Obama, Mueller, and the Clintons, { Slick Willy 'Bill' and Killary'}, who are all involved in the 'Uranium One Scandal'- This will present itself shortly, and when the Dems are rounded up and Fema'd, there WILL be hell to pay-The 'snowflakes' will come totally unscrewed, and will retaliate, and when and IF they do, they will go to 'their' awaiting 'digs' also- To PRISON they will go-

The Democrats are seriously considering running newfound Democrat John McCain against Trump in 2020...........

I heard about that, Mueller would stick his loin loaf into a rock pile if he thought a snake was in it, and McCain? The shape he is in I think he'll be dead before he ever gets anywhere, he's a treasonous traitor anyway, so, if he shit the bed, it'd be no great loss, hell' I'd celebrate his disappearance forever, NOW.... IF the rest of the deviants would follow suit.....Pelosi is uglier than a truck load of smashed assholes, how's that for an ugly sideshow? No way she's gonna take those 'saggy maggies' {tits} and make them into anything resembling 'Helen's Melons'- 'A little bit of putty, and a little bit of paint', only makes her look like what she really ain't!

Why is it that people  are now believing that Donald Trump is supposed to be draining the so called swamp. He is part of the swamp for goodness sake. He is a puppet of the Khazarian mob. Just look at who bailed him out when he went bankrupt. WAKE UP PEOPLE. Mr. Trump is doing a bait and switch. Trump, Obama, the Clintons.They are all cut from the same cloth. First you divide then you conquer. Great strategy. It will work every time. Remember this all started years before these players came along but they were chosen to do their part in this elaborate scheme at this point and time in history. Will the plan succeed? I don't think so. Only time will tell.

I would just like to say this:
We might never know what the reality of the situation is. For how many years have we believed that L.H.Oswald killed JFK with a single bullet?
Will we ever know the truth about about RFK, MLK, Malcolm, Paul Wellstone, Seth Rich, Ron Brown, Pope Paul I, Jimi, Bob Marley, the list is endless.
WHAT IF instead of "he said, she said", "I'm right, you're wrong" we just agree to disagree and try to find the eventual truth.
Trump has pissed off most of the people and institutions I do not trust. Is the enemy of my enemy my friend? I don't think so but I choose to look deeper.
I choose to investigate, discern, pray, meditate and perhaps some day get an inkling of the truth.
If you love Trump or hillary or hate them, does that have any real relevance other than a means to divide and conquer which TPTW have been so good at for millennium?
Lastly we are all to an extant part of the swamp. I pay illegal taxes to a government who kills innocent people with my money. Unfortunately if I had the balls to stand up I'd probably spend my life in prison. I do what little I can, short of going to prison, but I WILL NOT argue with fellow humans and further divide us. Just my thoughts.
Peace.

I would prefer neither one of the two. Who is the lesser of two evils, I don't know. These two families were once best budds. If she was elected she had orders to follow. He was elected he has orders to follow.Orders from the same master. Both are puppets playing a well orchestrated role in this elaborate game. That's all I'm saying.

Well you certainly went out on a limb with that answer kiaraxavier.........however I do think Trump is playing the good puppet role...........and of course Hillary would be the bad puppet.........

Re: Julian Assange Just Warned of a Deep State Coup Meant to Install Mike Pence as President Sun Dec 17, 2017 7:11 am

OMG!!! These people, if one can call them that, are NOT elected. They ALL work for the same controllers. They are ALL related by blood and genetic linage.
Trump IS the SWAMP. They ALL are.

Re: Julian Assange Just Warned of a Deep State Coup Meant to Install Mike Pence as President Sun Dec 17, 2017 10:06 am

Nothing is ever as it first appears to be.

Is Trump perfect? Who is?

And just what type of person does anyone think it will take to clean out this mess? A Father Mulcahy type? Lol.

This rot runs so deep and has been entrenched for so long that it is foolish to think miracles will happen overnight.

Please don't think for a second that I was in favor of the vile subhuman whore of Babylon Hitlery to have been hired as CEO of USinc. Cheeto45's resume does not have a death trail attached to it so that is a plus. They ALL pretty much suck and every last one of them are joined at the hip.
As to what do I recommend we do??? I don't have a clue. If people can not even absorb the fact that the electorates are the ones that allegedly "vote" in the CEO and not "we the people" says we are dealing with such a deep level of false knowledge ingrained to the point of stupidity. The fact that the party system is a total farce and all of those that favor one to another and think it means anything well... how does one fix that?
There are times, especially lately, that I totally get the Gates Eugenics Program. smdh

PurpleSkyz wrote:Please don't think for a second that I was in favor of the vile subhuman whore of Babylon Hitlery to have been hired as CEO of USinc. Cheeto45's resume does not have a death trail attached to it so that is a plus. They ALL pretty much suck and every last one of them are joined at the hip.
As to what do I recommend we do??? I don't have a clue. If people can not even absorb the fact that the electorates are the ones that allegedly "vote" in the CEO and not "we the people" says we are dealing with such a deep level of false knowledge ingrained to the point of stupidity. The fact that the party system is a total farce and all of those that favor one to another and think it means anything well... how does one fix that?
There are times, especially lately, that I totally get the Gates Eugenics Program. smdh

Lol about the Gates Eugenics Program. I hear ya. (Ever feel like an alien on this planet?)

Yes - they all suck but it is going to take a bit of a "scoundrel" in their own right to get in that world of the swamp and do the dirty work. Because who in their right mind would want to - even if they could get elected?