Time Traveler Reveals Map of the United States After Catastrophes

Al Bielek was born in 1927. While working for various military contractors, the people who worked with him began to reveal the truth about the US government’s involvement with extraterrestrials and PSYOPS (Psychological Operations) programs. Strange things started to happen to him soon afterwards. 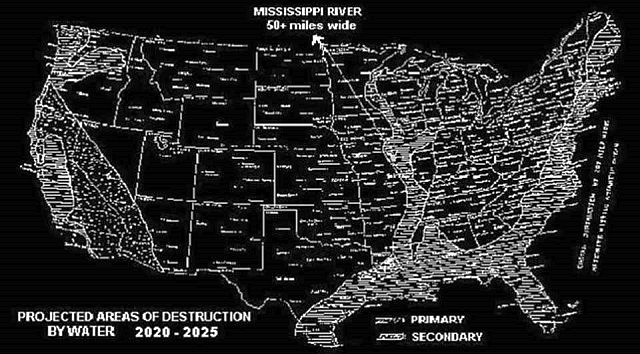 Recruited into the “Montauk Project,” Bielek said he worked his normal day job in California, and then would take a highly classified underground magnetic levitation subway train from Los Angeles to Montauk.

The Montauk Project is an alleged series of secret United States government projects conducted at Camp Hero or Montauk Air Force Station on Montauk, Long Island, for the purpose of developing psychological warfare techniques and exotic research including time travel.

In the 1980's when the time control programs were operational, Al Bielek's duties were to handle the operations of the Mind Control program as well as he participated in some of the time travel experiments.

Both he and Duncan who was one of the Montauk Boys programmers under Al Bielek traveled to Mars on several occasions.

During a mind control/time travel session he got visions of major catastrophes to our planet especially to the United States. His visions have been worked out on a map which shows that in the future large parts of the U.S. will be under water.

Besides the visions of many other futurists of what the United States will look like in the future, probably the most appealing vision came from the American psychic Edgar Cayce called "The Sleeping Prophet" who received a message which was transmitted while he was in a sleep-like trance that the earth will be broken up in many places whereby many portions of the East Coast and West Coast, as well as the central portion of the United States will be under water.

Al Bielek as well as Edgar Cayce both received the messages/visions at the time they were in an altered state of consciousness. Such a state of awareness opens a gate to visual experiences other than normal waking consciousness.

Posts : 486
Join date : 2017-05-11
I am a contrarian yet my experiences tell me the earth and her climate are changing.
When a multi-millionaire who got his $ strip mining Tennessee (Al Gore) lectures me on "global warming", I scoffed. He took advantage of environmental concerns by fostering fear to line his pockets and fan his ego.
Just as when tRump blames climate change on a "Chinese hoax" while repealing public lands in Utah so his buddies can drill/ mine on it, I scoff.

Posts : 486
Join date : 2017-05-11
There was an "apocalypse" map (I can't remember it's name.) that was popular in the 90's in new age circles/ stores that showed where the land would change. As 2000 came and went people asked why the prophecy didn't come true. They then were told that the timeline that the map maker saw had been changed, partially due to the soul vote we took in 1987, during the harmonic convergence to evolve past "the matrix."
Of course this can be discounted as changing the story to fit reality.