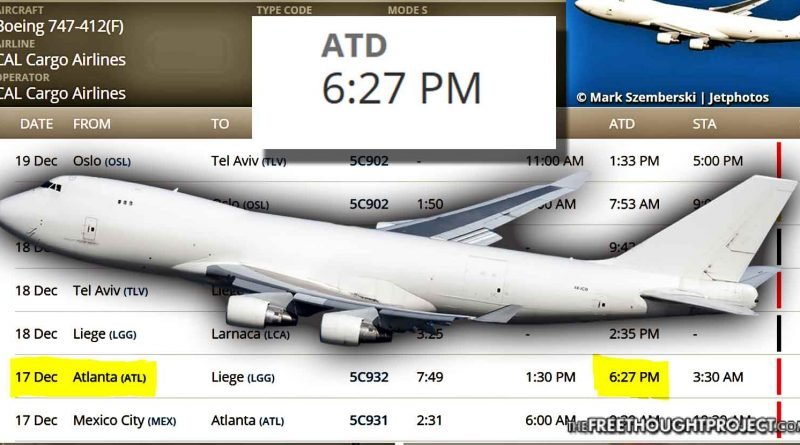 December 20, 2017 renegade 1 Comment
By Rachel Blevins
Atlanta – The world’s busiest airport experienced an unprecedented power outage that seemed to defy all of the precautions put in place to prevent it, and during the 11-hour ordeal, internet users noted that only one mysterious plane was allowed to leave the airport.
Over 1,000 flights were canceled when the Hartsfield-Jackson Atlanta International Airport lost power around 1 p.m. on Sunday, causing a chaotic situation as thousands of travelers were affected. While Georgia Power claimed that the power outage was the result of a small fire, it left many wondering why the generators and backup systems available to prevent such an emergency were not utilized.
All flights were grounded during the power outage—or at least that is what the public was told. According to the air traffic website, FlightRadar24, there was at least one flight that landed at the airport right before the power went out and then left in the middle of the ordeal. A Boeing 747, with the tail number 4X-ICB, is a cargo plane that landed in Atlanta from Mexico City at 1 p.m. on Sunday.
Despite the fact that Atlanta officials claim the next flight did not leave the airport until 12:26 a.m. on Monday, after the power was restored, the records from 4X-ICB show that it departed from Atlanta at 6:27 p.m. on Sunday—right in the middle of the outage.

The plane’s next destination was Liege, Belgium, and while it could be played off as just another cargo plane, the fact that it was the only plane allowed to leave Atlanta’s airport is just one notable factor.
The plane is operated by CAL Cargo Airlines, a Jewish airline company headquartered in Tel Aviv, Israel. Its fleet consists of just three Boeing 747’s and it claims to transport a variety of cargo, including “controlled pharmaceutical and healthcare products, live animals, dangerous goods, oversize and overweight cargo.”
The airline’s website lists two members on its Board of Directors—Chairman & CEO, Offer Gilboa, an Israeli entrepreneur who previously worked for one of the largest commercial real estate companies in Israel; and Vice Chairman Muli Ravina, an Israeli businessman who previously worked as Assistant to the Director General at the Ministry of Finance.
Not only does CAL Cargo Airlines have direct ties to the Israeli Government but there is also a questionable amount of power surrounding one of the airline’s businesses. Liege Airport Cargo Handling Services (LACHS), a cargo terminal in Belgium, is fully owned and operated by CAL Cargo Airlines.
The company’s website boasts its Customs Clearance status, which allows LACHS to gives CAL Cargo Airlines “the ability to load and unload trucks without the presence of a customs agent,” essentially meaning that no one outside of the company has to know what it is transporting.

The process of clearing customs has traditionally presented challenges and delays for critical time sensitive shipments, when lag time can translate to significant financial setbacks. At LACHS, our warehouse is fully bonded and we have established a customs simplification process to ensure timely handling of your cargo.
Our customs approved process includes the ability to load and unload trucks without the presence of a customs agent, print customs documents locally rather than traveling to the customs office, and clear customs documents simply and more quickly than ever before.”

After 4X-ICB departed from Atlanta on Sunday, its records show that it made a stop at its hub in Liege, and then landed in Tel Aviv on Monday, after a stop in Larnaca, Cyprus. Now, the internet is searching for answers as to what the cargo plane could have been transporting from the United States to the airline’s headquarters in Israel.
While users on 4chan suggested that the cargo could have been anything from nuclear weapons, to gold, to paperwork, to people, a report from Squawker noted that “the most popular suggestion is that this blackout was part of an operation to discreetly move some W80 variable yield nuclear warheads out of the country, and into the hands of the Israeli’s. The power outage being a necessary part of the ruse to blind nuclear detection devices that are standard at all major airports.”
Although officials have attempted to claim that an 11-hour blackout at the world’s busiest airport was simply caused by a small fire, investigations by internet users have discovered that only one plane was allowed to leave during that blackout—and its airline has no oversight from customs agents, along with direct ties to the Israeli government.
As The Free Thought Project has reported, Israel has intentionally ramped up hostility toward Iran in the last month, and after the Trump Administration announced that it plans to move the U.S. Embassy in Israel to Jerusalem, Israel responded to increased tensions with Palestine by launching airstrikes.

This article originally appeared on The Free Thought Project.

Re: Flights Logs Show A Single Israeli Plane Secretly Flew Out of Atlanta During Airport Blackout Thu Dec 21, 2017 1:31 am