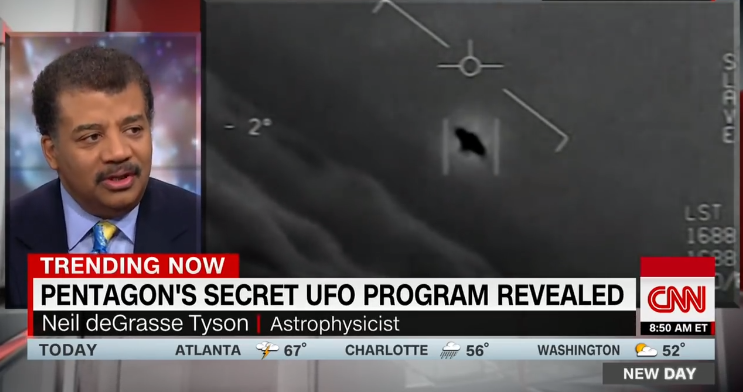 “People I think have conflated the concept of a UFO with whether we’re [being] visited by aliens. UFO means unidentified flying object, this is a highly non-specific term, it is so non-specific it admits you don’t know what you’re looking at. . . . The universe brims with mysteries, just because you don’t know what it is you’re looking at, doesn’t mean it’s intelligent aliens from another planet.”
advertisement - learn more

When asked about his skepticism about intelligent extraterrestrials visiting Earth, Tyson responded, “The evidence is so paltry for aliens to visit Earth, I have no further interest. . . . It seems to me, aliens who visited us . . . would manifest more convincingly than fuzzy video, and there’s no reason to assume that because you don’t know what you’re looking it equals aliens that visited us from outer space.”
The Pentagon’s recent admission of having a program that studies UFOs has created a lot of buzz in the media. It’s official disclosure, but there have been millions of documents released via governments, military, and intelligence agencies that clearly document the fact that these things show up in our atmosphere all the time, that they are tracked on radar, and that military pilots are often scrambled to take a closer look.
The Pentagon claims the program was shut down, but the recently retired director of the program, Louis Elizondo, says otherwise. He also recently appeared on CNN stating that there is a great deal of evidence suggesting we are currently being visited, and have been visited, by intelligent extraterrestrials. You can read more about that, and him, here.
Even the pilot of the UFO video released by the Pentagon stated his belief that this particular object was “not from this world.”

What Neil Is Not Acknowledging

Encounters with UFOs have been tracked on radar as well as visually confirmed thousands of times, and this is just one example of multiple encounters, many of which are far more extraordinary than this one.

That being said, this one was quite extraordinary. We are talking about objects travelling at tremendous speeds and performing maneuvers that no known aircraft can perform, some of which even defy our current understanding of physics.

One of the pilots of this particular encounter, David Fravor, describes his experience as follows:


As I got close to it, probably within a mile to half a mile, it rapidly accelerated to the south and and disappeared in less than two seconds. . . . It had no wings . . . there’s no rotors. . . . This was extremely abrupt. Like a ping pong ball bouncing off the wall, it would hit and go the other way and change directions at will. And then the ability to hover over the water and then start a vertical climb from basically zero up towards about 12,000 feet, and then accelerate in less than two seconds and disappear — it is something I had never seen in my life.

Neil may be right about the fact that we don’t know what it is, but that doesn’t mean we should therefore ignore the phenomenon. He also fails to provide any alternative explanations. He doesn’t even speculate on the matter, which is weird because we’re talking about, again, an object performing never-before-seen maneuvers, displaying extremely technologically advanced capabilities.

It may not be ET, but if not, where is it from? From what we’ve been told, the military doesn’t even have access to this type of technology. If it did come from the military, how would the military pilots and their superiors not know about a craft in their vicinity, given the fact that they are themselves representatives of the military?

Is the craft manmade, perhaps from a rogue aerospace program that not even the U.S. military knows about? Who knows. But the fact that Tyson didn’t even acknowledge the operating characteristics of this craft goes to show that he doesn’t really recognize the significance and implications of such sightings.

Another interesting fact is that it is only when our pilots come too close to these craft that they perform evasive maneuvers or shut down the pilots’ critical instrumentation and electronic equipment. You can see some more examples and documents of that in the article linked below.

“The Evidence Is So Paltry”

“Intelligent beings from other star systems have been and are visiting our planet Earth. They are variously referred to as Visitors, Others, Star People, ETs, etc. . . . They are visiting Earth NOW; this is not a matter of conjecture or wistful thinking.”

– Theodor C. Loder III, Phd, Professor Emeritus of Earth Sciences, University of New Hampshire (source)
Prior to the official disclosure of UFOs, and mind you, not just any unidentified flying objects, but again, objects travelling at tremendous speeds and performing maneuvers that no known aircraft can, skeptics like Tyson stated that the evidence for “UFOs” was practically nonexistent.

This simply isn’t true. The evidence for UFOs, before their official disclosure, was abundant. This really showed how little Neil had researched the topic. As a wise man once said, “Condemnation without investigation is the height of ignorance,” and that’s exactly what’s happening here.

“It is my thesis that flying saucers are real and that they are space ships from another solar system. I think that they possibly are manned by intelligent observers who are members of a race that may have been investigating our Earth for centuries.”

– Hermann Oberth, one of the founding fathers of modern rocketry (source)
He stated that, from a scientific standpoint, what we had at the time did not really constitute evidence at all. Meanwhile, hundreds of other academics and scientists were publishing articles in peer-reviewed journals, and giving lectures around the world regarding the scientific data and evidence that’s already been obtained from the UFO phenomenon.

The fact that Neil has been popularized, and given a mainstream media platform, is dangerous. Because he’s been given so much credibility, his words have the power to influence the minds and perception of anyone watching.

Well, when it comes to the extraterrestrial hypothesis, there is, as a former NASA astronaut and Princeton physics professor once said, “abundant evidence that we are being contacted, that civilizations have been visiting us for a very long time.”

To portray the extraterrestrial hypothesis as ridiculous, which Neil does, is simply ignorant. From a scientific standpoint, witness testimony is not credible, but when you have several hundred individuals who’ve held high ranking positions within the military, the academic community, and within intelligence agencies as well as private military contractors like Lockheed Martin, telling us that some of these UFOs are indeed extraterrestrial in origin, and are much more technologically advanced than our own, it’s not something to ignore.

“There is a serious possibility that we are being visited and have been visited for many years by people from outer space, by other civilizations. Who they are, where they are from, and what they want should be the subject of rigorous scientific investigation and not be the subject of ‘rubishing’ by tabloid newspapers.”

– Lord Admiral Hill-Norton, Former Chief of Defence Staff, 5 Star Admiral of the Royal Navy, Chairman of the NATO Military Committee (source)
Neill is also not taking into account the Black Budget, which funds programs that have no oversight from Congress, just as described by a 1997 U.S. senate report. You can read more about that, and access that report, here.

Does that mean the scientific developments within this world are not real because we don’t have access to them? Absolutely not.

The National Security Agency (NSA) was founded in 1952, but its existence was hidden until the mid 1960s. Even more secretive is the National Reconnaissance Office, which was founded in 1960 but remained completely secret for 30 years. What’s included in that is all of the science, technology, and engineering as well.

Apart from the UFO phenomenon, we have studies being published regarding intelligently designed structures we have found on Mars. A new study published in the Journal of Space Exploration titled “The Mounds of Cydonia: Elegant Geology, or Tetrahedral Geometry and Reactions of Pythagoras and Dirac?” has added to the already robust evidence pointing to “artificial surface interventions” on Mars.

“We have, indeed, been contacted — perhaps even visited — by extraterrestrial beings, and the US government, in collusion with the other national powers of the Earth, is determined to keep this information from the general public.”
– Victor Marchetti (Second Look, Volume 1, No 7, Washington, DC, May, 1979)
Here is another article/study regarding strange structures on the far side of the moon.

Why His Comments Were Suspicious

The point is, there are a number of factors that support the extraterrestrial hypothesis, and it needs to be looked at and examined. Why does Neil debunk it? Either he is paid to do so (Related CE Article: Ex NASA Astronaut & Princeton Physics Professor Says His Colleague Carl Sagan Fudged Evidence of Extraterrestrial Beings), or he is simply being challenged to look into it a bit more. But to refer to the extraterrestrial hypothesis the way he did is extremely ignorant. Out of the scientists who have studied the subject, he is extremely outnumbered.

“Yes there have been crashed craft, and bodies recovered. . . . We are not alone in the universe, they have been coming here for a long time. I happen to be privileged enough to be in on the fact that we have been visited on this planet, and the UFO phenomenon is real.”

– Apollo 14 Astronaut Dr. Edgar Mitchell (source) (source) (source)
As you can see, you’re not “out there” or “dumb” for believing in the extraterrestrial hypothesis. You are in good company. Neil clearly hasn’t done his research or examined the evidence, as he clearly states there is none.

It makes you wonder, if Carl Sagan fudged data, could Neil be part of a campaign within the world of secrecy to ridicule the ET hypothesis?

“Behind the scenes, high ranking air force officers are soberly concerned about the UFOs. But through official secrecy and ridicule, many citizens are led to believe that the unknown flying objects are nonsense.”

They are clearly not nonsense.