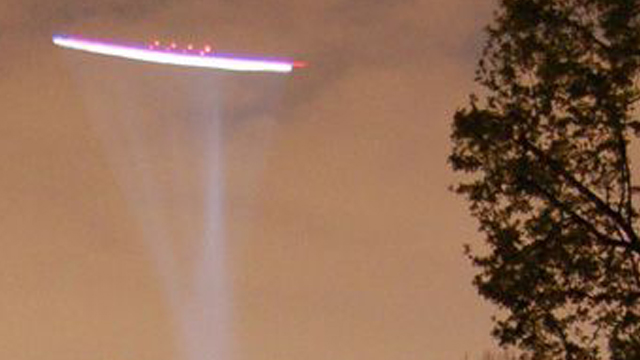 (Arjun Walia) The picture you see above is of a UFO that prompted the complete shutdown of a Chinese airport several years ago. It was covered by multiple mainstream media outlets, despite the fact that they never really do justice to the UFO phenomena. UFOs shutting down airports is nothing new, it’s happened multiple times, with the best example in North America being the “O’Hare” incident.


“I must say that if your listeners could see for themselves the mass of reports coming in from airborne gendarmerie, and from the gendarmerie charged with the job of conducting investigations, all of which reports are being forwarded by us to the CNES (National Center for Space Studies), then they would see that it is all pretty disturbing.”

Thousands upon thousands of previously classified documents related to UFOs and potential extraterrestrial beings have been released into the public domain by dozens of governments, as well as several Freedom of Information Act (FOIA) requests. In the United States, the NSA, CIA, and FBI have done the same, proving that these agencies put significant resources toward studying this phenomenon. The topic has exited the realm of “conspiracy theory” and entered into the realm of reality, largely due to the efforts of hundreds of military whistleblowers of all ranks, as well as politicians and academics. We’re talking about generals, pilots, professors, astronauts, world leaders, and more. If one thing is abundantly clear, it’s that something is going on here, and some people have known about it for a very long time.

It’s no secret that countries spy on each other, and use a variety of methods to do so. Take the American government’s STARGATE project, for example, which investigated parapsychology and then used their findings to spy on other countries. Of course, we can’t forget about the Snowden leaks, which showed how the U.S. government actively spies on not only their own citizens, but also on major corporations, financial institutions, and other countries.

When it comes to the topic of UFOs, this is no exception. Multiple governments have black budget operations, referred to Unacknowledged Special Access Programs (SAPs) in the United States, and they have absolutely zero oversight from Congress.

A document found online in the CIA’s electronic reading room outlines how the CIA was gathering intelligence on a joint effort between the USSR and the People’s Republic of China (PRC). This was almost two decades ago, when scientists from the USSR as well as the PRC initiated a joint study on UFOs, and stands as yet another document showing how seriously global governments have investigated UFOs throughout history:

Scientists of the PRC and the Soviet Far East have begun joint study of UFO’s. The first meeting of ufologists of the two countries has ended in the small maritime townlet of Dalnegorsk. The Soviet and Chinese specialists on anomalous phenomena have mapped out a program for investigating incidents that are already known and have also arranged to directly exchange video and photographic materials on new similar phenomena. Dalnegorsk has not been chosen by chance as the place for such acquaintance. In the last few years the number of cases of visual observation of UFO’s has noticeably increased there. In just the last four years alone no less than 10 UFO’s have been recorded. Specialists link their heightened interest in places here with the variety and wealth of useful minerals in Maritime Kray. Similar, incidents have also occurred in mountainous regions in China whose climatic conditions and natural landscape resemble our own. (source)

“Everything is in a process of investigation both in the United States and in Spain, as well as the rest of the world. The nations of the world are currently working together in the investigation of the UFO phenomenon. There is an international exchange of data.” – General Carlos Castro Cavero (1979).

If The Extraterrestrial Hypothesis Is True, What Are They Interested In and Why Are They Here?

“Decades ago, visitors from other planets warned us about the direction we were heading and offered to help. Instead, some of us interpreted their visits as a threat, and decided to shoot first and ask questions after.” – Former Canadian Defense Minister Paul Hellyer (source)

The document above was definitely an interesting find, particularly because it reveals that the experts who gathered in this joint effort linked the presence of these beings to the natural resources in the area. Now, if you’re thinking that extraterrestrials are going to invade us and use our planet for our resources, you’re probably incorrect. Why? Because the evidence suggests we have been being visited for a long time now. If some type of “invasion” were being planned, like the ones commonly portrayed in movies and television, it probably would have already happened.

It was also an interesting find for me personally because I’ve been researching this topic for a long time and have come across several stories regarding extraterrestrial craft landing, humanoid bodies exiting the vehicle, and the beings taking rocks and plants, almost like an ET scientist exploring our planet.

Other “experiencers” have also suggested many of these extraterrestrials are actually concerned with the well-being of our planet. This has been the sentiment of a large number of people who claim to have contact experiences, or telepathic experiences with extraterrestrial beings.

One of the most astonishing UFO witness cases comes from a supposed encounter with over sixty schoolchildren in the town of Ruwa, Zimbabwe, on September 16th, 1994. The children claim to have seen multiple hovering objects that resembled what we would describe as spaceships. Many of these children have now grown up, stating that they were shown images of a destroyed Earth in the future unless we collectively, as one human race, turn it around. You can read more about that specific story here.

There are literally thousands of these stories, most sharing similar details, and there are also countless whistleblowers adding to the evidence. For example, Colonel Ross Dedrickson, who, in the 1950s, was responsible for maintaining the inventory of the nuclear weapon stockpile for the AEC and accompanying security teams checking out the security of the weapons, among many other duties throughout his career, gave an interview about it shortly after he passed, stating that some extraterrestrials are primarily concerned with the well-being of our planet.

He has also been outspoken about UFOs and their constant presence around nuclear missile facilities.

If you want to learn more about this topic, you can find hundreds of heavily sourced articles in the exopolitics section of our website.

“Yes there have been crashed craft, and bodies recovered. . . . We are not alone in the universe, they have been coming here for a long time. I happen to be privileged enough to be in on the fact that we have been visited on this planet, and the UFO phenomenon is real.” (source) (source) (source)

– Dr. Edgar Mitchell, the 6th man to walk on the moon

I am going to leave you with this video, as I’ve done countless times before, so I apologize if you’ve seen it already. As the years go by, the evidence continues to get stronger and stronger, more so than the evidence we use to approve our prescription drugs, or posit the existence of black holes, for example.