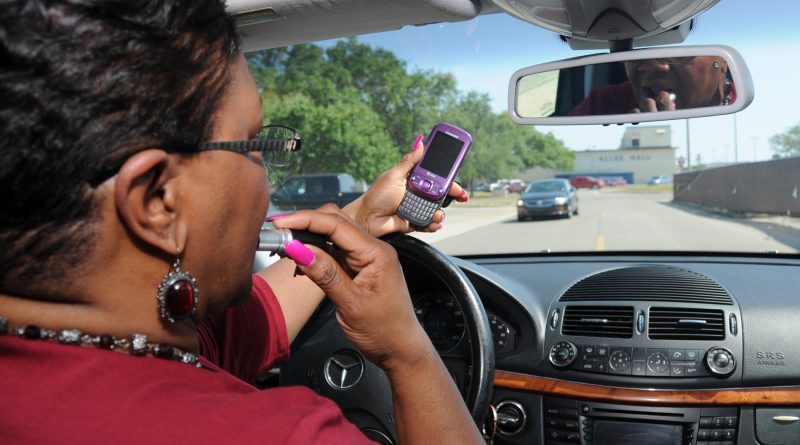 January 1, 2018 renegade 0 Comments
By B.N. Frank
Drivers are exposed to high radiation levels when phones try to stay connected to towers. Mind blown yet?
Cell phone radiation adversely affecting the brain (and everything else) is not breaking news.  There has been credible U.S. military research that has proven this since 1972.
Warnings in regard to drivers being exposed to higher levels of radiation while using cell phones is not breaking news either. See November 9, 2009:  Dr. Oz on Good Morning America.
“… don’t talk when you’re driving. In addition to the dangers of being distracted, people who are behind the wheel while they’re on their cell phones may face an increased RF exposure risk. That’s because the phone signal must move to several wireless towers. Those waves have to boost up from your cell phone to find the towers,” Oz explained. “If you’re in an elevator, same thing.”
May 31, 2011:  “WHO: Cell phone use can increase possible cancer risk”

Finally, cell phones emit the most radiation when they are attempting to connect to cellular towers.A moving phone, or a phone in an area with a weak signal, has to work harder, giving off more radiation.

Reduce or avoid using your cell phone when it is sending out high levels of RF Energy. This happens mainly when: You are in a fast moving car, bus, or train.  Your phone puts out more RF energy to maintain connections to avoid dropped calls as it switches connections from one cell tower to the next unless it is in airplane mode.

You may be an excellent driver so you aren’t concerned about this.  Regardless, you might find it interesting to know what experts had to say about how this radiation is affecting everyone’s blood-brain barrier:
2011:  “WHO: Cell phone use can increase possible cancer risk”
Dr. Keith Black, Chairman of Neurology at Cedars-Sinai Medical Center in Los Angeles:
“What microwave radiation does in most simplistic terms is similar to what happens to food in microwaves, essentially cooking the brain,” Black said. “So in addition to leading to a development of cancer and tumors, there could be a whole host of other effects like cognitive memory function, since the memory temporal lobes are where we hold our cell phones.”

…National Institutes of Health, revealed radiation emitted after just 50 minutes on a mobile phone increases the activity in brain cells.
Manufacturers of many popular cell phones already warn consumers to keep their device away from their body and medical experts say there other ways to minimize cell phone radiation.

Again – you may feel like this isn’t affecting you or your driving.  But what about everybody else who shares the road with you?
According to experts in 2010 “…up to 3% of all people are clinically hypersensitive, as many as one-third of us to a lesser degree.” NBCNews.com, “Is Electrosmog Harming Our Health?”
This being said, one could surmise from this 2010 article that every 3 in 100 drivers arehypersensitive to cell phone radiation and 1 in every 3 drivers are affected to a lesser degree.
Obviously some people are going to be able to function better than others while their blood-brain barriers are being disrupted by cell phone and wireless radiation.  The same could be said about other carcinogens or toxins and even alcohol and drugs.
Are you now wishing there were tougher laws about driving while using phones and other electronic devices?  Current laws and fines don’t seem to be enough to keep many drivers from using devices and creating all kinds of dangerous situations on the road.
Also worth considering:  adverse effects from radiation exposure are cumulative.
So those who were part of the 1/3 of the population who were “sensitive to a lesser degree” in 2010 may be more sensitive now.  This sensitivity, of course, could include ability to safely operate a vehicle.
Cell phone radiation has also been proven to affect impulse control.  That’s one of the reasons that California firefighters fought for an ordinance to prevent cell tower infrastructure from being installed near their stations:

A 2004 SPECT brain scan study of firefighters in Central California found brain abnormalities in all the men tested, as well as delayed reaction time, lack of impulse control and cognitive impairment. (Source)

There’s also this decades-old study:  “Actual or potential effects of radiation enhancing violence and potential homicide”
Gulp.
Cell phone radiation and lack of impulse control.  This could explain why there has been an increase in digital addiction, road rage and other strange and tragic situations like this one:

January 26, 2016:  “Man Dies In I-75 Crash While Allegedly Watching Porn Behind The Wheel, Pantsless”
Rest in Peace, Mr. Jones.
It could also explain road-related accidents and deaths discussed in this 2017 Bloomberg article:  “Smartphones Are Killing Americans, But Nobody’s Counting”
Maybe you don’t use your phone while you drive. If so, thank you. Unfortunately if other people are using their phones or other electronic devices while you are driving, you are still being exposed to higher levels of radiation from those devices than you would be if your vehicle wasn’t in motion.
If your car is emitting WiFi all the time, you are also being exposed to harmful radiation.
This article explains how GPS technology can also be a source of exposure.
You may feel sane, empowered and in control behind the wheel so none of this may apply to you.  Regardless, here is a list of ElectroSensitivity symptoms in case you are concerned about anyone else:

Good luck out there.  For more research, see links below.