Vatic Note: Remember, this author is a caution
warning due to his blog on the Russians “are our enemy” Blog, posted on
Before Its News and we covered it on this blog and tore it apart for its
misleading nature. So keep that in mind when you listen and read this
below. It could or could not be real. You decide. I am not saying
its intentional, rather either ignorance or intentional and the results
are the same and its why I recommend caution, NOT JUDGEMENT, rather
caution.

Until I can find out if he is a disinfo agent or for real, I issue a
caution warning. Of this one I see no harm as long as we do not buy it
as a lead into a false flag preplanned alien invasion that will never
take place except from false flag players, in order to manipulate us
into globalizing. A blog we did, quoted a whistleblower stating that
the illums were going to set up bogus “Archeological finds” that would
then lead us into doing as they wished, so be careful, and be cautious.

The video at the end is very interesting to say the least and
intrigued even me, It was a great deal of science, but then so was
Global warming. Thats my point. Its worth the read, time and effort,
with the caveat to be cautious and wait for confirmation.

Egypt – Secrets Found – Ancient “Space-Ports”: “When Men Of Earth Traveled The Stars”
http://beforeitsnews.com/unexplained-phenomena/2012/08/egypt-secrets-found-ancient-space-ports-when-men-of-earth-traveled-the-stars-2430298.html
by Live Free or Die, Before Its News

Having a never ending curiosity and having wondered for many years,
what would be the result if I had applied the secret template ciphers I
know and use here in the USA to Egypt? I had been involved with coded
systems all around the world vicariously an example would be leading a
party from monument to monument over the phone from Africa.

Research had indicated over the years that many who used these codes
adopted them from others who adopted them from Egypt. So I decided to
conduct a basic large scale layout test. Knowing the core cipher in the
“code” is the same world wide, I examined Abydos, in particular the
Osirion (as this location is one of the few that exhibit structures from
the “first-time”).

Then applied the numbers/ alignment hidden in the architecture to the
known template ciphers and within days made amazing and even disturbing
finds across 100′s of miles of the deserts of Egypt. I had sat alone in
my shack and done it. 48 hrs in solitude with my curiosity on the
throttle and expertise at the wheel…. And wow! 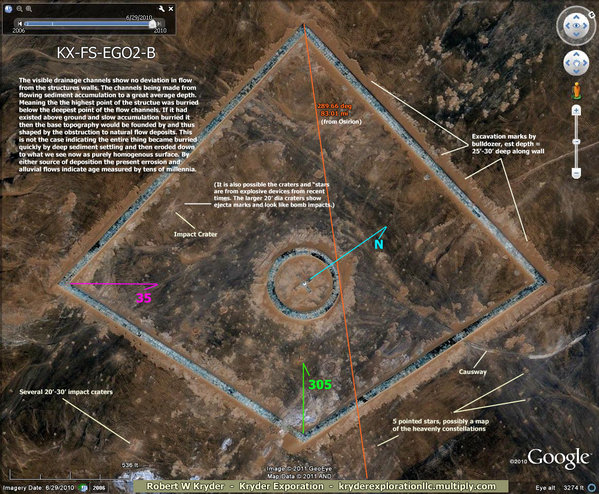 The Template ciphers are very ancient with their base form
originating from the math of creation / reality. The same math used to
study fluid flow, electrical dynamics, magnetic fields to gravity and
black holes. It incorporates tetrahedral math and explains the nature
of torsional forces and angular momentum on “space-time” or
hyper-dimensional physics.

These same template forms are represented everywhere on Earth. Such
as Mandalas and sand paintings of Tibetan priests and Native American
Elders of the Southwest USA. In architecture and construction, city
planning and roads, in religion myth and legend, in story and song… This
math and its geometry was used in pre-deluge times, 10,000bc to
30,000bc+ not just as a symbol with reverence but in technology and
everyday life to offer a 20,000 year run of a virtual utopia.

It was again the miss-use of the same that ended it all. After which
the knowledge became secret and emulated by elite groups to put
themselves above the rest. For at least 6,000 years it has been
incorporated world wide, again in temples, cities, roads etc… But this
time kept under wraps and out of site or hidden from the masses. The
earliest maps known are of mining areas and mining colonies and adopt
this template cipher system. The Jesuit priests and Triad of the Orient
use the numbers in initiation rights. The Nordic use the numbers in
their sagas and so on.

It is highly possible that if their is truth to the Sumerian texts
that indeed the entire world was mined under one rule. The evidence
would support this. It also suggests that after that rule the knowledge
was remembered by separated groups worldwide. Each retaining a “symbol”
that portrays the same template cipher. Giving each group an identity of
those that knew or retained a portion of the hidden past and its math
and technology. Symbols such as the cross, the spade, the heart,
diamond, four leaf clover, the yin yang and so on… All of which can be
laid directly on the main template with perfect alignment. 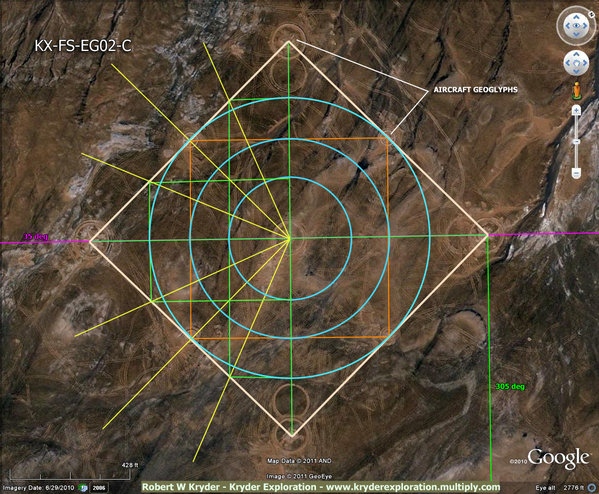 It took me over 2 decades to figure it out and find the base
template. But it is the key to breaking them all worldwide. There is
indeed more to it than just reading them all as they as well represent
the intellectual minds of every man who used it. The manner in which it
was used is as then as diverse as the men who used it as well.

Egypt represented an opportunity to apply this all to the time of the
“Mega-builders”… The time of wonder, “when men of Earth traveled the
stars”… Using this system in Egypt offered validation to the whole once
more. From still buried and some excavated pre-deluge 10,000 to 30,000
year old structures / cities, geo-glyphs of aircraft, Ancient city sites
blasted by craters to 1000′s of tombs (many raided with bulldozers
using industrial mining techniques).

Areas came to light with massive above ground structures built on
sacred mathematical layouts. Some featuring modern excavation revealing
very very modern looking building of massive proportions. There has been
talk these could be ancient “space-ports” mentioned in historical
texts.

Although these have little to do with the time frame of my previously
found “sidewalk” route through the “tomb valleys” and royal geoglyphs…
They are connected by virtue of their nature and connections through
history to the more modern surface geoglyphs and lanes of travel over
the ancient buried causeways, buildings and waterworks.

Read much more with many more pictures -

»  Deep Space Secrets Unclassified NASA hacker: I found evidence America has Deep Space Warships
» Have Lost Pyramids Been Found in Egypt with Google Earth? UPDATE 2013
» Moon Inside The Winter Circle of Stars on Valentine's Day - Brightest Stars You can See from Earth
» Pyramids Of Egypt: Secrets That Egyptologists Don't Want You To Know
» Pyramids Of Egypt , Secrets That Egyptologists Dont Want You To Know