OUT OF MIND » TRUTH IN CONSPIRACY THEORIES? » HISTORIES MYSTERIES » Researchers discover ancient map of the universe at archaeological site in Mexico


At an elevation of nearly 13,000 feet, researchers have unearthed an ancient miniature model of the universe.
The optical effect created by the shrine in the water “suggests the place is the representation of a primeval time and space, a miniature model of the universe,” INAH said in a statement.
The existence of a tetzacualco (a shrine) in the middle of a natural pond and the optical effect that occurs in the water suggests we are looking at a miniature model of the universe.
Furthermore, reports suggest that researchers from the National Institute of Anthropology (INAH) and History also discovered a number of decorative pieces associated with the rain god Tlaloc.
The site known as Nahualac may have been created specifically to give off this impression. 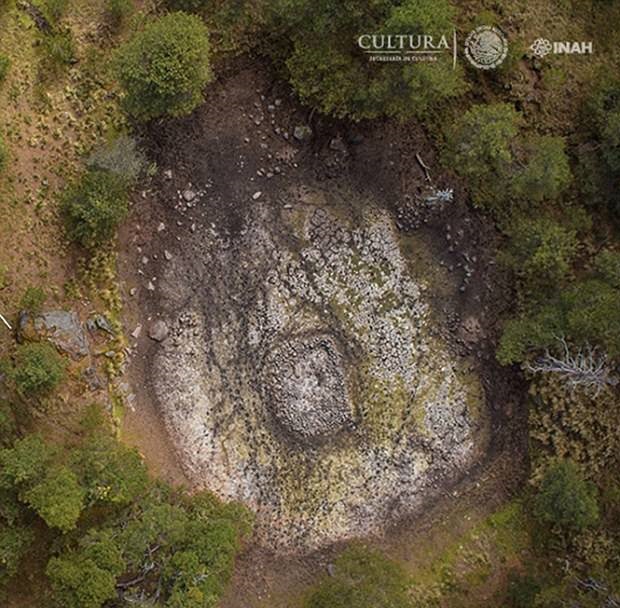 The remnants of an ancient stone ‘tetzacualco’ were found by experts inside the center of a natural pond (seen in the image above) below the Iztaccihuatl volcano in Mexico, at an elevation of nearly 13,000 feet. Image Credit: Isaac G—mez, Nahualac Archaeological Project, SAS-INAH
“The intention that water surrounds specific ritual architectural elements seems to have been an important part of Meso-American thought.” This is what archaeologist Iris del Rocío Hernández, from the Sub-Directorate of Subaquatic Archeology (SAS) of the National Institute of Anthropology and History, said in a statement.
The researchers indicate how to intricate environment around the pond mimics the geometric concept of a ‘quincunx’, where the ancients placed four objects are placed around the corner of a square or rectangle, surrounded by a fifth object at the center.
“You can see the corners and the spurts of the walls, as well as some mounds of stones that surround it,” said archaeologist Hernández Bautista. 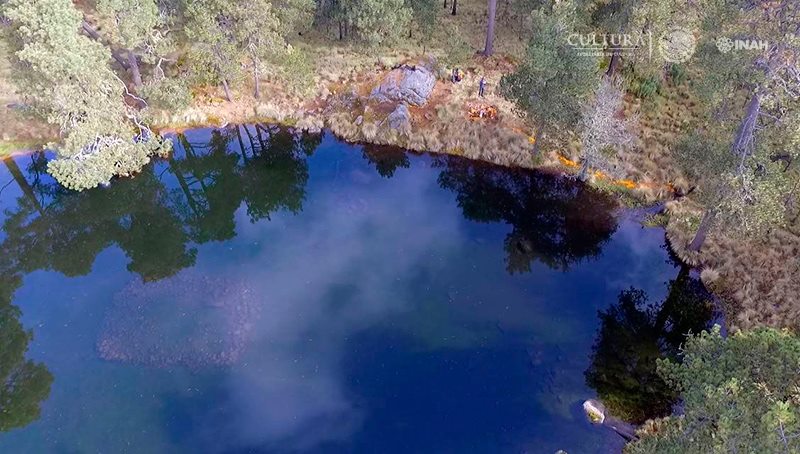 According to researchers, the site may have been home to a mini-map of the universe. The stones are visible in the center of the pond in this image. Image Credit: Isaac G—mez, Nahualac Archaeological Project, SAS-INAH

The archaeologist proposes that there was a ritual control of the water coming from nearby springs to irrigate the pond with the aim of causing a visual effect in which it seemed that the structure and the mounds of stone floated on the water mirror, which in turn reflects the surrounding passage.
“These visual effects, in addition to the characteristics of the elements that make up the site and the relationship they have between them, suggest that Nahualac could represent a microcosm that evokes the primitive waters and the beginning of mythical time-space,” Rocío Hernández explained.
Some Mesoamerican creation myths maintain that the terrestrial monster Cipactli floated on the primitive waters and then split itself in two, creating the heavens and earth.The Nahualac lagoon could emulate that idea.

OUT OF MIND » TRUTH IN CONSPIRACY THEORIES? » HISTORIES MYSTERIES » Researchers discover ancient map of the universe at archaeological site in Mexico

» Researchers Discover What Was Located On Top Of The Great Pyramid In Egypt
» Standing stones uncovered near important archaeological site
» NASA Picture that Reveals Possible 'Archaeological Site' on Mars
» Unprecedented: 7,000-Year-Old Submerged Archaeological Site Found Off The Coast Of Florida
» Archaeological pieces of a UFO found in Mexico