OUT OF MIND » PERCEPTUAL AWARENESS » THE SHIFT IN CONSCIOUSNESS » Talking With Tors – Is Consciousness Everywhere?

Talking With Tors – Is Consciousness Everywhere?

by Dan Green
There is now more esoteric, occult, mystical – call it what you will – literature available than there ever was, and all at the touch of a fingertip. You can read at leisure about almost anything of this nature as attested to by its author. It would be less complicated if everybody all agreed on everything but clearly, owing in the main to interpretation, this is not always the case. The way forward for any dedicated researcher is to investigate for one self and as naturally as possible, and so here are two examples whereby I have done just that – the subject ‘Is Consciousness all around?’
Both long term Buddhist meditation practitioners and neurologists, having literally put their mind on the matter, have arrived at the same conclusion, the latter more recently postulating that consciousness is an intrinsic property of everything, similar to gravity. This ‘Panpsychism’, announced, along with Buddhism, by ancient Greek philosophy and Paganism is a growing belief now in the West amongst some neuroscientists particularly amidst the works of Giulio Tononi and Cristof Koch and their ‘Integrated Information Theory’. Pic 1;   Is Consciousness all around?
That there may be consciousness everywhere also brings into play that our very own planet Earth is fully conscious consequently all her mountains, rivers, hills streams. With this once thought of as outrageous possibility, there have also been experiments to try and see if collective meditation can influence events in the real world. The Global Consciousness Project have their objective of looking for correlations between major world events and results obtained by random event generators or EEG’s dubbed Electrogaiograms. Such a deviation was detected in response to the time of the 9/11 attack. By using two satellites, recordings of the usually smooth, daily rhythmic strength of the earth’s magnetic field was downloaded and found to display irregular variations before tailing off a few days subsequently. With all these possibilities and investigations current, now allow me to submit two of my own experiences that might be relevant proof. Five years ago I was paying one of my many summer visits to Glastonbury Tor. I have had many documented adventures upon the Tor and owing to what has happened to me I am left with no choice other than to accept that it must have some as of yet undiscovered strange properties associated with it. This time, having ‘chatted’ with what I was assuming to be the resident consciousness of the hill – or Deva as Theosophy would call it – it was time for me to leave and I wondered if I dare chance provoking any response that would confirm that it had both received and accepted my attempt at conversation. Now as I don’t like to do things by half I am quite happy to resort to clichés and Cecil B. DeMille effects, and so my request went something along the lines of, ‘If you have listened to me, will you please give me one clap of thunder before I leave?’ As I sauntered away nothing happened so I shrugged my shoulders and felt a little guilty about my potential vanity. 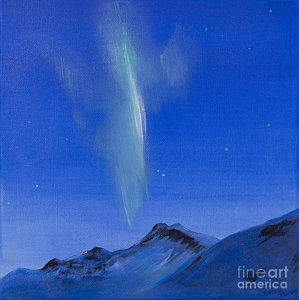 Pic 2;           Impression of a Mountain Deva
Two nights later I was relaxing with the family in our caravan at a site about five miles away, our last evening before we were to leave the following morning. It was almost 11pm at night and we had the sky light roof open to let in a cooling night air. Suddenly, the overall aerial silence was broken by a resounding solitary thunderclap! Was this one clap the notification I had been waiting for upon leaving the Tor two days earlier? If so the response had been more accurate than I had thought – It wasn’t designated for when I was leaving the Tor, but for when I was leaving the entire Somerset region! The acknowledgement therefore would have been both kindly and accurate – could I have one thunderclap before I leave? I was leaving the following morning! Pic 3;   Mam Tor, The Peak District, England.
The following year after the Glastonbury Tor episode with its possible response from all pervading consciousness, I was at it again, this time involving the 517m Mam Tor near Castleton, Derbyshire, in the Peak District, its name means ‘Mother Hill’ also referred to as ‘Shivering Mountain’. This visit had one specific directive in mind, (pun intended!) however, owing to its personal nature I’m not going to share what the intent was other than to say that it involved a Tibetan invocation involving the Snow Lion that is depicted in the Emblem of Tibet and ranges over the mountains. It was moderately windy up there when I went and my Tibetan banner was trying to take off up and out of my hand. I wasn’t thinking of any visual response there and then, but the entire incident returned to me towards the end of 2017 when a very uncommon event occurred for all to see. Pic 4;  Tibetan Snow Lion on the Emblem of Tibet
At dawn on December 16th a rare ‘Snow Bow’ appeared above the frozen summit of Mam Tor. Snow flakes and its intricate icy surfacing can’t give us the same show as raindrops, so the best we are told that can be expected is that a rainbow coloured halo can form on the ground rather than the sky. But this one WAS sky borne! One other uncommon phenomenon that can form is that of the ‘fog bow’, a colourless rainbow made up of miniscule raindrops causing fog. Back to the Snow Bow, and Met Office forecaster Craig Snell announced, ‘It is quite unusual in this country to have the combination of low sun at the same time as falling snow which is necessary to produce a snow bow’. Could it be possible that this visual was a delayed and consciousness response to my visit? Maybe not even delayed in the sense that we know it, as my understanding is that Time is simply an illusion produced by successive conscious states travelling through eternal duration. Pic 5; Mam Tor Snow Bow
I invite the reader of this Blog to make up their own mind about both these accounts I have given as a possible evidence that consciousness is everywhere. Sceptics may prefer to think my interpretation as being nothing more than just a claimed wishingful thinking and fulfilment and Old School adherents might just plump for that rapidly outmoded cry of ‘coincidence’. Alternatively, let’s not preclude that they might just be genuine confirmation of what is now being pursued by neuroscience, that consciousness IS everywhere and therefore a well concentrated and directed thought or conversation can be entitled to a response from anything.
Go out there and investigate for yourself! OUT OF MIND » PERCEPTUAL AWARENESS » THE SHIFT IN CONSCIOUSNESS » Talking With Tors – Is Consciousness Everywhere?