We have heard it circulated through several online sources for a number of weeks now—9000 sealed indictments waiting to be opened and served throughout the country. These indictments are suspected to be against Deep State/Cabal operatives who have been making efforts to sabotage the interests of the people for decades. The notion seems to have significant credence, but one important question might be, "What can we expect to see in the coming weeks and months once these indictments are served?


The answer is uncertain at this point, but let's be more specific. The entire reason why indictments are sealed is multi-faceted. If a court were to produce an indictment against a suspected offender, there would need to be certain precautions taken in order to insure the indictment was successful.

We have heard that these indictments are sealed to prevent suspects from fleeing, destroying evidence, or sabotaging the case in some way. However, these files might also be sealed in order to avoid tipping off other possible conspirators of the crimes involved in these cases. To add, if federal law enforcement needed to gain further leads on potential suspects they might let word of the indictments circulate, wait for a time, and then see which suspects lose their nerve and make a run for it.

In this way, law enforcement might use some of these indictments as a scare tactic in order to flush out suspects that they may not have been aware of prior. The possibilities are numerous, it seems. However, instead of further speculation, let's examine the facts of the situation.

What we know from the situation is that the corporate media has not touched the story of these indictments. This seems to suggest that either the media does not consider the story very substantial, or they are deliberately attempting to further cover for the Deep State as they did all through 2017—not to mention the previous two to three decades.

These indictments do exist, according to reports. It is the number of indictments which has been the point of confusion. Are there truly over 9,000 of these files, as researchers suggest, or could the number be even greater (or possibly lesser)?

While we consider these things here is a previously deleted article coming from the Epoch Times. The article appears to have been deleted very soon after it posted for reasons unknown.

Since late October, more than 9,000 sealed indictments have been filed in districts across the United States. Sealed indictments are typically used in prosecuting individuals or criminal networks in cases where revealing names could lead individuals to flee or destroy evidence.

As of Dec. 22, 2017, there were 9,294 sealed indictments, according to data collected by researchers and gathered from the Public Access to Court Electronic Records (PACER) service of the federal judiciary. This includes 1,224 in the central district of California, which includes Los Angeles; 194 in Washington; and 248 in the southern district of New York.

The number of indictments filed in less than three months is in stark contrast to previous years. According to a 2009 report from the Federal Judicial Center, in all of 2006, there were only 1,077 sealed indictments, and these were about 0.96 percent of all criminal cases that year.

According to Marc Ruskin, a former FBI undercover agent and author of “The Pretender: My Life Undercover for the FBI,” it’s unclear whether the current sealed indictments are connected, but the high number is something he never saw in his 27 years as an agent.

Ruskin said the large number of sealed indictments may explain the relatively low profile maintained by Attorney General Jeff Sessions. “If he’s been occupied with an initiative that is sort of under wraps and being conducted covertly, it would explain why he hasn’t had a prominent position in the media as of late—because these are things he can’t talk about,” Ruskin said.

Because of the large number, Ruskin said the indictments “can’t all be related to the special prosecutor, because that would be a little fanciful to all be interrelated to Mueller and the work he’s doing—although he may have a certain number of sealed indictments that we don’t know about.”


Since the indictments are sealed by a judge, it would be illegal for anyone to reveal their content. Yet, as Ruskin pointed out, with political cases it’s not uncommon for details to be leaked to the press. He said the lack of chatter in legacy news outlets may suggest that the higher-ups have no political interest in leaking their content.

He also noted “there has been no chatter in the retired FBI circles.”

Ruskin said that among the causes mentioned for the surge of sealed indictments, the most plausible, he believes, is that it is related to human trafficking. Even his work investigating the mafia didn’t generate anywhere near as many sealed indictments as those currently pending; but with a human trafficking network, he said, there would be multiple groups operating in multiple districts—which fits the profile.

This would also fall in line with recent actions of President Donald Trump, who on Dec. 21, 2017, signed an executive order declaring a national emergency over human rights abuses and corruption. Trump declared January 2018 as National Slavery and Human Trafficking Prevention Month.

Ruskin said: “It would be consistent with the large number of sealed indictments, because it is a problem that’s nationwide. If there was a national initiative involving the Justice Department, and the FBI and ICE, let’s say, focused on that issue, then that would be a crime problem that would be bi-coastal and would involve multiple districts.”

“That could plausibly account for all the sealed indictments,” Ruskin said. “That would be more plausible than most other explanations.”

It seems particularly unlikely that the sealed indictments have much to do with the alleged Russian influence in the election. This narrative of Russian collusion in the 2016 election was admittedly fabricated by various interests including CNN and possibly other parties within media. It also appears that as many corporate media, social media, and other institutions refuse to represent the President in any balanced way, that this narrative was simply another attempt at smearing Donald Trump while distracted from the consistently censored issue of Pedogate.

Though it is clear that the President has his share of issues, none of these issues excuse the extreme bias shown by corporate media. The fact of the anti-President narrative the mainstream that has been running ever since late 2016, combined with the all but complete silence on the topic of rampant pedophilia in government, seems to reveal that the media is not holding up its end with regard to honest reporting.

Referring to an article from another website, we can see where the notion of the 9,000 indictments came from. However, when we view the apparent data, we might notice something. The following table comes from the website, the Nexus News Feed. 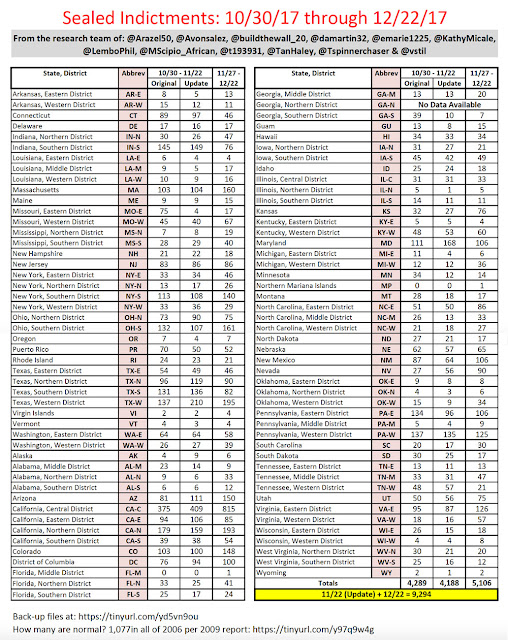 The numbers appear to add up to around 4,000 to 5,000 indictments in each column. It is at the bottom where we see the number adding up to 9,294, but the ways in which these numbers were totaled comes across as ambiguous. It is unclear as to why one column represents the total indictments from one date, and then omits over 100 of those same indictments in the Update column.

Can we be certain that the update is more reliable then the original? The answer seems unclear.

According to other sources, the number was confirmed to be around 4,000, but of course, the numbers may vary depending upon the source.

It is fine, I believe, that we consider the possibility that there could be more data to be uncovered with regard to these sealed indictments. It is always a good idea to verify any source which makes claims with regard to the details of forthcoming information.

It does appear that these indictments are real (though the exact numbers are questionable), considering all that has transpired since the beginning of October, 2017. It will be interesting to see the developments that follow the announcements of these indictments, and even more interesting to see the rapid changes within the U.S. and the world once justice is finally served.


Zero Hedge - Ex-FBI Assistant Director: Patriots within the FBI Will Soon Step Forward and Expose the "Cabal" - Links and Commentary

Black Money and Military UFOs - The Beginnings of Disclosure of the Secret Space Program - Links, Videos, and Commentary

The Take-down of the Mainstream Media - Over a Dozen Corporate Media Figures Fired for Sexual Misconduct - How Far Does This Issue Go?

How Covert Agents Infiltrate the Internet to Manipulate, Deceive, and Destroy Reputations - Commentary and Links Included