Booms, Flashes and Coverups of the Space War: We’re Not Buying it Anymore 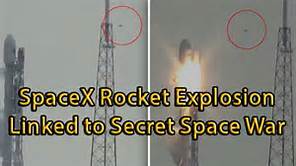 It’s a serious topic, but I can’t stifle the occasional giggle at the absurdity. A space war is raging over our heads and most Earthlings haven’t the slightest inkling. Those of us who do are frustrated with the lies and coverups. Sonic booms from grapefruit-sized, ground-shaking meteorites? Really?
Don’t people wonder why all of a sudden we have “meteorites” raining down upon us almost weekly or monthly, sonic booms, brilliant flashes of light virtually simultaneously—across the planet?
Don’t they wonder why umpteen rockets have been launched from multiple countries in the past few weeks? Don’t they wonder why so many crash and burn?
Physicist Dr. Claudia Albers PhD points out many recent suspect incidents in her quiet way.  Thanks, L.

James Munder displays our more common sarcastic approach, below.
Come on, people. Time to wake up. They lied about EVERYTHING. This is a battle for Planet Earth and they can’t hide it any longer. The pathetic moves by the establishment to suggest American fighter pilots observed a mysterious craft ONCE several years ago and don’t know what it is, is an insult, and too little, too late as far as official “disclosure” goes. It doesn’t cut it.
They don’t want to tell the world they have multiple secret space programs—built with trillions in stolen taxpayer money. They don’t want you to know they are trading with off-world civilizations, including a lucrative HUMAN slave trade. They want to keep us small, ignorant, captive slaves.
Wasn’t the world paying attention when Gary McKinnon hacked into multiple US military and NASA computers and saw photos of space craft and lists of names, some of which were categorized as “non-terrestrial officers”? Was that lost on everyone?
Be ready for major shocks in the coming weeks and months because the lid is about to be blown off their appalling schemes. Even pedophilia and the Clinton body count will pale when the world learns of the activities these creatures have engaged in for decades with the blessing of your so-called American government.
And don’t let anyone tell you it’s an “alien invasion”. The infestation of Earth by malevolent extraterrestrials occurred millennia ago and we’ve been paying for it ever since. It’s simply astounding that we actually do live in the Star Trek era and virtually no one knows it—but there’s a new sheriff in town, and he’s turning it upside-down.
It’s unfathomable that Earthlings/Terrans don’t know there are millions of benevolent ETs up there fighting for OUR lives RIGHT NOW, but that’s the reality and soon everyone will know it. They won’t have a choice.  ~ BP