OUT OF MIND » POISON PLANET » VACCINE TRUTHS: MEDICAL INDUSTRY LIES » The Unhealthiest State In America Has The Best Vaccination Rate by RFKjr

The Unhealthiest State In America Has The Best Vaccination Rate by RFKjr Tue Jan 16, 2018 4:30 pm 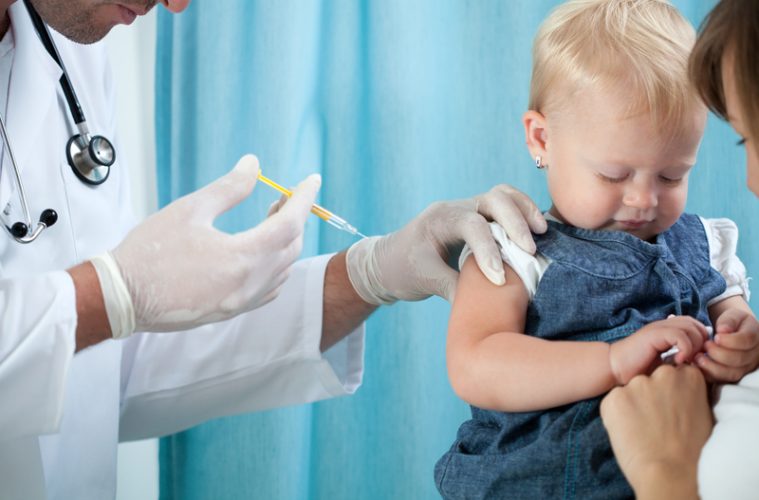 In a Daily Beast opinion piece on December 15, Paul Offit—one of the vaccine industry’s most strident ambassadors—puzzles over a seeming contradiction. How, Offit wonders, could the state of Mississippi, which has “the worst overall health in the nation,” have used standout “efficiency” to achieve over 99.4% vaccine coverage in kindergartners? Rather than seriously investigate this apparent enigma, Offit presents his ready-made answer and reveals his article’s true purpose. According to Paul Offit, Mississippi’s high vaccination rates are due to the state’s 1979 decision to make the government—rather than parents—the primary vaccine decision-maker for children.
Reflecting on the Mississippi Supreme Court’s 1979 elimination of that state’s religious exemption to vaccination, Offit applauds the Court’s position, stating, “If a parent harbors a religious belief that contradicts a basic tenant [sic] of modern medicine…the state has a right to protect the child from the irresponsible acts of the parent.” Offit—though a parent himself—tells readers that the state-determined “duty” to vaccinate supersedes other parental rights. In short, Offit appears to believe that coercion is the name of the game, openly admitting that he disapproves of the 47 states that still allow parents in the U.S. to take religious, moral or personal beliefs into account when making vaccine decisions on behalf of their children.

“The worst health in the nation”

According to the comprehensive state-by-state health rankings that Offit cites, Mississippi has remained squarely at the bottom of the nation’s overall health rankings for decades (Figure 1). The low ranking correlates, in part, with the state’s poverty statistics: one-third of Mississippi’s children live in poverty (the highest percentage of any state), and 87% of the state’s Medicaid enrollees are children. But from birth on, scattered health statistics suggest that Mississippi’s children and adolescents face other physical and mental health challenges as well. To cite some examples from the available data: 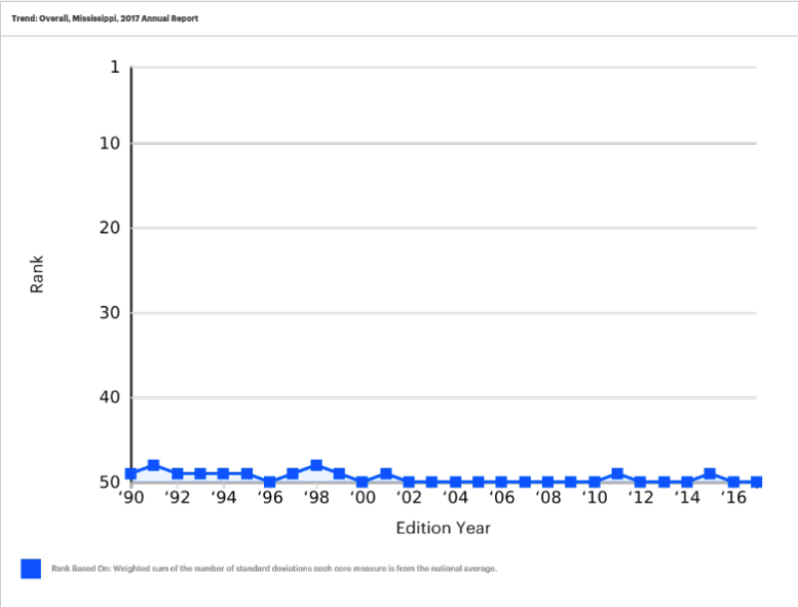 Despite juxtaposing two critical pieces of health information about Mississippi’s children—high vaccine coverage and poor health rankings—Offit does not ask the obvious elephant-in-the-room question: Could one have something to do with the other? Clearly, factors such as poverty and nutrition are one set of influences on health status, but vaccines—potent immune-system-stimulating medical interventions administered repeatedly, both prenatally and from birth—must be considered as another influence. Mississippi’s medical practitioners and Offit are shirking their ethical responsibilities by denying vaccines’ ability to trigger adverse health outcomes, including death.

Researchers who are less disingenuous than Offit have plausibly linked many of the above-listed health conditions (asthma, obesity, ASD and other neurodevelopmental disorders and infant mortality) to vaccines. ASD, in turn, has been associated with disrupted circadian rhythms, which appear to be linked to increased risk of suicide attempts in adolescents. Parents also have reported suicide as an outcome of devastating HPV vaccine damage. None of these associations should come as a surprise, given that vaccines intentionally tamper with normal immune system functioning and also contain unsafe aluminum adjuvants and/or other toxic ingredients such as thimerosal and formaldehyde.

Since the early 1990s, newborns have received the first of three mandated hepatitis B (HepB) shots within 24 hours of birth. In 1999, the head of the Association of American Physicians & Surgeons warned Congress that HepB vaccine recipients were 100 times more likely to experience a serious reaction from the HepB vaccine itself than from the disease.


In July 2017, the U.S. Court of Federal Claims ruled that there was “preponderant evidence” supporting the claim that vaccines “actually caused or substantially contributed” to SIDS.

A 2017 study of reports to the Vaccine Adverse Event Reporting System (VAERS) concurs with this warning and suggests that young children bear a heavy burden of HepB damage. Looking at over 20,000 adverse events reported to VAERS over a ten-year period (2005–2015) following administration of single-antigen HepB vaccine (or other HepB-containing vaccines), the researchers found that half (51%) of all the adverse event reports were for children under two years of age, and another 13% were for 2-to-18-year-olds. The serious adverse events reported in association with single-antigen HepB vaccine included 45 deaths, with sudden infant death syndrome (SIDS) being the “most commonly reported cause.” In July 2017, the U.S. Court of Federal Claims ruled that there was “preponderant evidence” supporting the claim that vaccines “actually caused or substantially contributed” to SIDS. A 2008 SIDS autopsy study also found that SIDS cases often manifest “signs of inflammation and response to infection” that are “out of proportion to pre-existing symptoms.” These authors added that SIDS infants typically are “not totally ‘normal’ in the days prior to a SIDS death” and frequently display symptoms such as “listlessness” and “droopiness”—the types of “mild problems” that public health experts list as possible reactions to vaccination.

Now consider Mississippi’s high infant mortality rate. Half of all infant deaths in Mississippi occur on the very first day of life, and another 25% happen within the first month. Mississippi’s most recent analysis of child deaths reports that there were 523 child deaths in the state in 2014. For almost three in ten deaths (29% or 151/523), the State Department of Health considered the cause of death to be “conditions originating in the perinatal period,” with another 19% (102/523) in the “other and unknown” category. Reviewers then examined 172 of the total cases (33%) in greater detail, including 57 infant deaths. Almost three-fourths (70% or 40/57) of the infant deaths were due to “asphyxia,” and the cause of death for another 12 infants (21%) “remained undetermined.” Research has shown that U.S. medical examiners and coroners are inconsistent in the cause of death that they apply to sudden unexpected infant deaths and often classify them as “suffocation/asphyxia.” This lack of consistency—and the masking of deaths that may be vaccine-related—“impacts true understanding of infant mortality causes, and inhibits our ability to accurately monitor and ultimately prevent future deaths.”

Rather than crediting parents who have the wisdom to ask valid questions about vaccine safety, Offit and his ilk want Big Brother to take over.

Offit makes it clear that he wants other states to follow Mississippi’s example and take away parental rights to make vaccine decisions. For him, the fact that vaccination rates are high across the U.S. and that relatively few parents exercise current exemption options appears to be beside the point. A February 2017 Forbes propaganda piece about West Virginia (one of the two other states to have deprived its citizens of religious exemptions) reveals the same pro-coercion mindset. The Forbes writer (who has since had multiple articles retracted due to serious questions about conflicts of interest) admits that West Virginia parents “vaccinate their children primarily because they have no other choice” [emphasis added] and that vaccination rates “would dip dangerously if nonmedical exemptions were allowed.” Rather than crediting parents who have the wisdom to ask valid questions about vaccine safety, Offit and his ilk want Big Brother to take over.

A recent commentary in the International Journal of Environmental Research and Public Health provides a different perspective. Calling attention to the “neurotoxic content” of many vaccines and “disturbing evidence” that vaccines may not be as safe as implied, the author, Keith Schofield, calls on government to recognize the potential for toxins in the environment and in vaccines to have damaging synergistic effects and create a neurotoxic “overload” in both humans and fetuses. Rather than going after Constitutional and parental rights, Offit would do well to heed Schofield’s call for the U.S. medical profession to “reassess its current general vaccination program” and admit that the nation’s “excessive” vaccine schedule “has to be considered dangerous [and] irresponsible.”

Sign up for free news and updates from Robert F. Kennedy, Jr. and the World Mercury Project. Your donation will help to support us in our efforts.

OUT OF MIND » POISON PLANET » VACCINE TRUTHS: MEDICAL INDUSTRY LIES » The Unhealthiest State In America Has The Best Vaccination Rate by RFKjr