Posted on January 25, 2018 by truthearth
I have been feeling under the weather lately (epic flu going around, luckily it only clipped me but didn’t take me down completely) and haven’t been doing too much around here but I stumbled upon these weird music videos and a few in particular really jumped out at me.
I don’t know why but it seems that among these creepy places that we see (Kooky Krafts/Comet Ping Pong/Pinkie’s and so on) there seems to be a pattern of symbols and the one that keeps repeating is the rabbit. I found a small collection of Israeli (red flag there already) videos that seem to be promoting a club or something. I couldn’t totally tell. Some of them involve what appears to be promotion of pedophilia, cannibalism and lots of sex in general (nothing wrong with sex of course, but in this context it’s different).
(Common sense disclaimer) I want to iterate here that there is nothing wrong with doing drag or being LGBT. I myself identify as being born gay and have dressed up in amateur drag once or twice for Halloween! (I can see people hitting the unsubscribe button now!) The reason I say this is because in the Israeli videos there is some drag dress up and LGBT sex stuff going on. This doesn’t mean that all LGBT and people doing drag are evil Luciferian pedophiles. Let’s not throw the baby out with the bathwater here. It appears that the Cabal has mostly infiltrated the LGBT community and saturated it with symbolism, sadly.
So one of weirdest ones that I found was one I will post below and let you all decide what it means. I am showing you the Israeli videos below. The name of the channel is Pagfilms:

Here’s another which features another bunny rabbit doll with breasts and female genitals which comes in at 15 seconds:

Upon further research of their Facebook page I found some pretty creepy stuff there (again lots of LGBT stuff so if that’s not your thing I will find some photos that aren’t so graphic or sexual).
I’m not sure why they would have this baby look up towards two rabbits that look like they are mating but babies seem to appear in many of these ‘creepy’ groups: 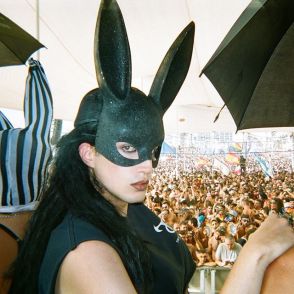 The next couple of videos I want to show you are from a channel called Night Club and the songs are about as dark as the name sounds. This video features a young girl being chained up dressed as Alice and goes on to dance for a small group of men with masks on along with what appears to be a female handler who sits in the back and watches everything.
In the beginning of the video we see Alice tied to a chair by her wrists looking very distraught: Then we see Alice performing for a group of men in masks with a woman in the back who appears to be her handler:

Just wait until we get to the lyrics. They match the video in creepiness and horror. Next we see Alice forced to drink what appears to be blood from a teacup:

Then we see Alice in chains with a collar around her neck and her dancing in a cage:

Then at the end of the video all the men are wearing skull masks:

I will share the video below. I will also share the lyrics here which are seriously disturbing but go along with the video very well, sadly:

Night Club has another video where they feature the same creepy art that we see in all of these different places which you can watch below. It’s like a digital rendering with devil faces and snake tongues and knives falling and so on. It’s as creepy as it sounds:

Hopefully this has helped expose a little more of this this horrific mind-control that we hear so much about. We owe it to the victims to check these videos out and become aware of them and ultimately heal them. The light must be shone on the dark. Thank you everyone and much love as always!