OUT OF MIND » THE INSANITY OF REALITY » GOVERNMENTS & THE NEW WORLD ORDER » Computer Attacks to Prevent Access to the FISA Document?

Computer Attacks to Prevent Access to the FISA Document? 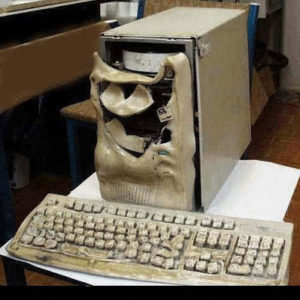 Illustration only
I am hearing of a lot of computer issues today. While we’ve had no Internet issues for a couple of months, my speed today was brutally slow, hubby took his PC in for repairs, and there was a Century Link truck in the neighbourhood but service never improved. My mother’s iPad shut down last night for some reason and she thought she might have a virus.
James Munder has a really bizarre story to tell, and Jim Stone as well.
Jim shared this warning after his computer got super hot when trying to access the FISA document:

THE REAL FISA MEMO IS OUT THERE. YOUR SYSTEM WILL BE ATTACKED IF YOU FIND IT. TAKE YOUR HARD DRIVE OUT, SET A BIOS PASSWORD, AND BOOT WITH KNOPPIX IF YOU GOT IT. DO NOT TRY THIS ANY OTHER WAY.

Thomas Paine at AIM4Truth/American Intelligence Media said he’s gone through the 100-page document already, so some folks have it, but Jim Stone says it may have been compromised by now as he suspects Alex Jones’ copy may be.
Perhaps this is all just so much FISA-gate drama, or perhaps not. It sounds pretty out there but information wars are new to us so we aren’t sure what this hybrid warfare looks like. I am confident there are workarounds that the White Hats can handle and we will all get to see the FISA documents if we so choose.
From what Thomas says, most of us won’t want to read it anyway. The summation in the 4-page memo is sufficient for me. Those who really need to see the hard evidence for the sake of prosecution of the criminals can always share via thumb drive can’t they? And then there’s the old fashioned way—paper.
Thanks for the heads up, L.   ~ BP

Jim Stone: “We are probably all in much worse trouble than we think”
Posted By: Watchman
Date: Wednesday, 24-Jan-2018 11:42:26
We are probably all in much worse trouble than we think.
What happened yesterday was very strange
I don’t know if we can win. The breach in Intel processor security is so complete, and very evil people are exploiting it on countless servers everywhere. Here’s what happened yesterday, probably as a result of the breach, and this is not a guess, it happened.
Alex Jones got the real FISA memo, which would put Clinton & Co in jail. He tried posting it, and got more than one computer fried. I don’t know exactly how many, I just know it was more than one. But he did manage to get it put up. Then I tried to access it, and this computer shut down. I got it started again and everything was scrambled – only parts of what the computer was supposed to do worked (for example, it booted but with system monitor I could not look at bandwidth, it was gone, I could not look at open processes, they were gone, and I could not do screen captures, that did not work . . . .
And I tried to access the Fisa document again and BOOM, shut down. I tried a couple more times, and then something on the side of the computer burned me. I realized the flash drive with Knoppix on it was now getting so hot it could burn. If that was a real hard drive (from whatever they did to get it to get so hot) there’s little question it would have fried.
So finally, after about 40 minutes of getting shut down and rebooting I managed to get back to the Fisa memo again and it worked without a hitch, and was old outdated crap I saw the day before. Someone switched it. Alex probably does not have the real document anymore but it is a damn safe bet he did. Today, there’s not jack squat out there, Fisa is not being discussed anywhere on social media. Obviously blown off the web by AI
The flash drive survived, but ran hot the rest of the day yesterday. Today everything is normal.
So it is obvious that even if the FISA memo does get released, the shadow state, which owns everything now, probably won’t let it be read. I don’t consider what happened to this computer yesterday to be any sort of actual breach, because when you hit things on the web you are at the mercy of whatever you bring in. There is no way to avoid that.
If you think that’s bizarre, check this out.

OUT OF MIND » THE INSANITY OF REALITY » GOVERNMENTS & THE NEW WORLD ORDER » Computer Attacks to Prevent Access to the FISA Document?