OUT OF MIND » THE INSANITY OF REALITY » GOVERNMENTS & THE NEW WORLD ORDER » 33,000 Clinton Emails Previously Claimed to Be "Missing" Now Found? 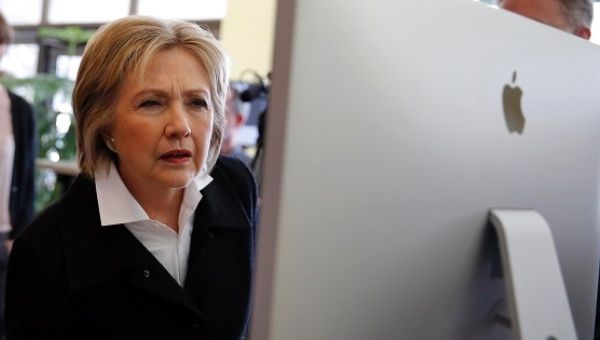 It was a messy ordeal. The election season of 2016 was one which many of us would like to forget. However, as things turned out, the election was only the beginning of an ongoing, two-sided struggle which involved the intentional concealment of damning secrecy of alleged government criminals, and the strenuous efforts of the people to dethrone and bring these (alleged) criminals to justice.


The topic of Hillary Clinton's illegal handling of classified information was originally discussed in late 2016. At that time, most of the corporate media was in the pocket of the Clintons, and there was very little sign of objectivity in mainstream reporting. This was, of course, realized when all of the journalists who had been secretly meeting with Clinton to discuss how they might portray her in the best light possible and to give her the best chance of winning the people's approval.


Among the bias reports about Clinton's history and that of the Clinton Foundation, was the notion that there was absolutely no way to obtain the email evidence which Clinton claimed to have lost prior to the scandalous investigation. Up until that point, there was much speculation as to what Hillary was attempting to hide when her server data conveniently went missing.

The news along with an exceptionally questionable FBI maintained that Hillary was free and clear to continue her campaign against the dreaded Trump. Meanwhile, the people were left ignorant of the truth behind Hillary's conveniently ambiguous past. Then it happened.

Suddenly, the people remembered that we live in a digital age in which professional back-up services store data--sometimes for years on end--even after it is deleted in one location. This is commonly done in government agencies for the sake of fault tolerance, and according to reports, this remote back-up technology was very available for Clinton and her staff.

As it turns out, the FBI reported prematurely and irresponsibly when they claimed there were no files to investigate, as FBI staff are fully aware of the thorough procedure needed to complete an official investigation. It appears that to some extent, that parties within the FBI were compromised by Clinton interests, just as the numerous members of corporate media were found to be. This seems to be the most logical explanation for the situation.

These topics have been revisited in recent developments, and this may be the reason as to why we see a new investigation into the Clinton email scandal. Many people assumed that this investigation was just one of Donald Trumps tricks to keep a woman out of the White House. However, as things appear, the case is very serious and if taken to court, could yield some very hefty charges for Hillary and her entourage.

For months now, we’ve been told that Hillary Clinton’s 33,000 missing emails were permanently erased and destroyed beyond recovery. But newly released FBI notes strongly suggest they still exist in several locations — and they could be recovered, if only someone would impanel a grand jury and seize them.


In a May interview with FBI agents, an executive with the Denver contractor that maintained Clinton’s private server revealed that an underling didn’t bleach-clean all her subpoenaed emails, just ones he stored in a data file he used to transfer the emails from the server to Clinton’s aides, who in turn sorted them for delivery to Congress.

The Platte River Networks executive, whose name was redacted from the interview report, said PRN tech Paul Combetta “created a ‘vehicle’ to transfer email files from the live mailboxes of [Clinton Executive Services Corp.] email accounts [and] then later used BleachBit software to shred the ‘vehicle,’ but the email content still existed in the live email accounts.”

Unless one of Clinton’s aides had the capability to log in to the PRN server as an administrator and remove a mailbox, her archived mailboxes more than likely still reside somewhere in that system. And they may also materialize on an internal “shared drive” that PRN created to control access to the Clinton email accounts among PRN employees. PRN has been under FBI order to preserve all emails and other evidence since the start of its investigation last year.

Clinton’s missing “personal” emails may also be captured on a Google server. According to FBI notes, Combetta “transferred all of the Clinton email content to a personal Google email address he created.” Only the FBI never subpoenaed Google to find out.

The FBI documents also reveal that Hillary’s server was mirrored on a cloud server in Pennsylvania maintained by Datto Inc., a tech firm that performs cloud-to-cloud data protection.

The Podesta Emails; Part One - An Examination of the Hard Evidence Brought Forward by Wikileaks

When PRN contracted with Datto, it requested that Hillary’s server be backed up locally and privately. But the techs forgot to order the private node, and they sent the server backup data “remotely to Datto’s secure cloud and not to a local private node.” The FBI never subpoenaed Datto’s server, either.

Then there’s the laptop Combetta loaded with the Clinton email archive and allegedly shipped back to a Clinton aide in Washington, who claims it got “lost” in the mail. Not so fast: The latest FBI document dump includes a series of interviews with an unidentified former “special assistant” to Clinton at the State Department who said the elusive Apple MacBook laptop was actually “shipped to the Clinton Foundation in New York City.”

But in a June follow-up interview, FBI agents inexplicably left it up to this critical witness to “inquire about the shipment” with the foundation’s mailroom manager, who works in Rockefeller Center. The FBI still does not have the laptop in its possession.

It turns out that investigators also know the whereabouts of the original Apple server Clinton used in her first two months in office. Recovering that equipment is critical because it contains a mass of unseen emails from Jan. 21, 2009, to March 18, 2009 — a critical period in Clinton’s tenure at State. Witnesses say the equipment was not discarded, as first believed, but “repurposed” as a “work station” used by staff in Clinton’s Chappaqua residence.

Yet the FBI says it “was unable to obtain the original Apple server for a forensic review.” Instead of seizing it, the agency has taken Clinton’s aides’ and lawyers’ word that the server’s bereft of relevant emails. In fact, the agency confesses on Page 27 of its 47-page investigative case summary that it failed to recover other equipment and data as well: “The FBI’s inability to recover all server equipment and the lack of complete server log data for the relevant time period limited the FBI’s forensic analysis of the server systems. As a result, FBI cyber analysis relied, in large part, on witness statements.”


Congressional investigators say FBI Director James Comey in his year-long “investigation” didn’t even bother to send agents to search Clinton’s homes in Chappaqua or Washington, DC. Nor did he dispatch them to the offices of the Clinton Foundation or Clinton Executive Services Corp. in New York City.

“The Clinton residences and other locations should have been treated like any other criminal investigation — with federal grand jury subpoenas or search warrants issued by judges and served in the middle of the night,” said veteran FBI special agent Michael M. Biasello, who worked criminal cases out of New York and other field offices for 27 years.

“Never — I repeat, never — in my career have I or any FBI agent known to me investigated a criminal case without the use of a federal grand jury, grand jury subpoenas or search warrants,” he said. “It’s disgraceful they weren’t used in this case.”

OUT OF MIND » THE INSANITY OF REALITY » GOVERNMENTS & THE NEW WORLD ORDER » 33,000 Clinton Emails Previously Claimed to Be "Missing" Now Found?