The Blink-152 rocker has enlisted some high-level ex-CIA spooks in his disclosure movement, and former Clinton campaign manager John Podesta is his twitter cheerleader.

The current Tom DeLonge disclosure happened in a most curious way. Suddenly, several high-level ex-CIA spooks and Pentagon insiders joined Blink-182 rocker DeLonge’s team, a start-up company called “To the Stars Academy.” One of the team members, Luis Elizondo, rolled out information on a UFO Pentagon program he headed up.
But Elizondo, for years, ran clandestine covert ops in Latin America for the US intelligence community.
Another DeLonge team member, Steve Justice, was once the program director of the Lockheed Skunk Works in Palmdale, California, where super-secret aerospace (and UFO?) research is carried out.
Jim Semivan, another DeLonge team member, “retired from the Central Intelligence Agency’s Directorate of Operations after 25 years as an operations officer, both overseas and domestically,” states the Academy website.
Chris Mellon “served 20 years in the federal government, including as the Deputy Assistant Secretary of Defense for Intelligence in the Clinton and Bush Administrations.”
Paul Rapp’s “past honors include a Certificate of Commendation from the Central Intelligence Agency for ‘significant contributions to the mission of the Office of Research and Development’.” (Note: This office, ORD, was where the CIA’s MKULTRA mind control program secretly landed, in 1962, after it purportedly ended.)
Norm Kahn—“Dr. Kahn had over a 30-year career with the Central Intelligence Agency…”
This is an impressive team of insider heavy hitters, with extensive backgrounds in deception.
In order to roll out secret information about UFOs, they COULD HAVE FORMED AN INDEPENDENT GROUP OF THEIR OWN, WITH NO AFFILIATION, AND LAUNCHING FROM THAT PLATFORM, THEY COULD HAVE GAINED INSTANT CREDIBILITY WITH THE PRESS AND MUCH OF THE PUBLIC.
That’s how UFO disclosure could have happened.
But no. Instead, they chose to align themselves with a rock musician who has stated: “Hello, my name is Tom DeLonge from the Blink-182. I have brought together an elite team from CIA, DOD and the FMR Director of Advanced Programs at Lockheed Martin’s SkunkWorks. We are aiming to build this ElectroMagnetic Vehicle to Travel INSTANTANEOUSLY through Space, Air and Water BY ENGINEERING THE FABRIC OF SPACE-TIME. Our company is called To The Stars… and you can invest in our plan to revolutionize the world with technology that can change life as we know it.” [emphasis added]
Compare how these government insiders COULD HAVE done disclosure as opposed to how they actually DID disclosure.
Getting the picture?
They aligned themselves with the perfect person who would bring down the scorn and mockery of the press.
Why?
Because clean and credible and convincing disclosure wasn’t their number-one objective.
What was their objective?
Obviously, to attract a certain amount of negative reaction.
In the world of intelligence ops, this would be called a limited hangout with a twist.
You put out a few tidbits of information, thus concealing the largest part of the truth—and at the same time you associate yourself with a bizarre source who will surely stain the quality of your limited hangout.
It works.
Again, Elizondo, the point man for recent UFO revelations, could have stepped up to the podium at a global press conference and said, “I want to introduce you to my elite team of former government insiders. After discussions, we’ve decided to form OUR OWN group and tell the truth about UFOs. We represent no one in government or outside government. We need no mouthpiece or promoter. We’re simply here to reveal hidden reality…”
But instead, he and the other insiders signed on with Tom DeLonge, a man they didn’t need and whose reputation would do them no good.
If you believe that choice was a simple error in judgment, committed by long-time CIA and military spooks with large ops experience, I have condos for sale on Venus.
The plan was to disclose and smear the disclosure. Confess and stain the confession. Admit and cast doubt on the admission.
If that isn’t so, if there is some other reason for these insiders to join forces with DeLonge, let’s hear it.

Jon Rappoport – The author of three explosive collections, THE MATRIX REVEALED, EXIT FROM THE MATRIX, and POWER OUTSIDE THE MATRIX, Jon was a candidate for a US Congressional seat in the 29th District of California. He maintains a consulting practice for private clients, the purpose of which is the expansion of personal creative power. Nominated for a Pulitzer Prize, he has worked as an investigative reporter for 30 years, writing articles on politics, medicine, and health for CBS Healthwatch, LA Weekly, Spin Magazine, Stern, and other newspapers and magazines in the US and Europe. Jon has delivered lectures and seminars on global politics, health, logic, and creative power to audiences around the world. You can sign up for his free NoMoreFakeNews emails here or his freeOutsideTheRealityMachine emails here.
(To read about Jon’s mega-collection, The Matrix Revealed, click here.)

Are we about to get proof of aliens? Clinton campaign chief tweets #TheTruthIsOutThere
UFOLOGISTS believe we are on the “threshold” of learning the truth about aliens after a former lawyer to US President Barack Obama hinted a big announcement about extraterrestrial life was coming.
Express.UK | by JON AUSTIN<
John Podesta, who ran the unsuccessful election campaign for Hillary Clinton tweeted: “Stay tuned for big announcement tomorrow #TheTruthIsOutThere.”
He was referring to the launch of a new project by former Blink 182 frontman Tom DeLonge, involving a series of former senior CIA and military officials, as reported by Express.co.uk yesterday.
Steve Bassett, head of the Paradigm Research Group (PRG) which campaigns for the end of an alleged “truth embargo”, could not contain his excitement.
He retweeted Mr Podesta, saying: “Is the circle about to close tomorrow? From this to this:  #disclosure.”
He later added: “I do not think the truth embargo can withstand this manoeuvre. We are on the threshold.”
PRG believes the US Government prevents anyone releasing official statements on the existence of aliens visiting earth.The group later released a statement saying: “The announcement today from Tom DeLonge and his group is a major step forward in the disclosure process.”It is now clear the Pentagon, CIA and other intel agencies have decided to move toward closing the constitutional breach that has prevented disclosure from taking place since the end of the Cold War.”We are perhaps on the threshold of the most profound event in human history.”Mr Podesta has previously expressed interest in the UFO phenomena and during the US election campaign Wikileaks released confidential emails between him and Mr DeLonge about the subject.Mrs Clinton also pledged during her campaign that she would find out the truth about aliens and the mysterious Area 51 USAF base in Nevada if she made it to the White House. 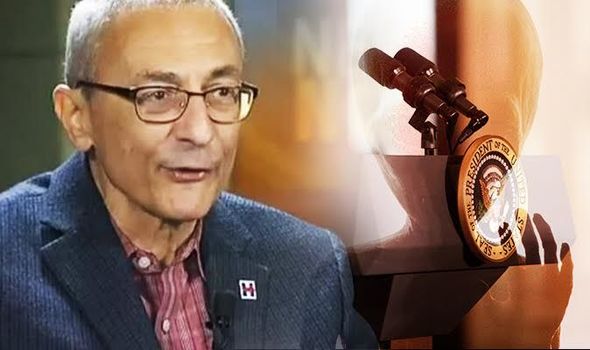