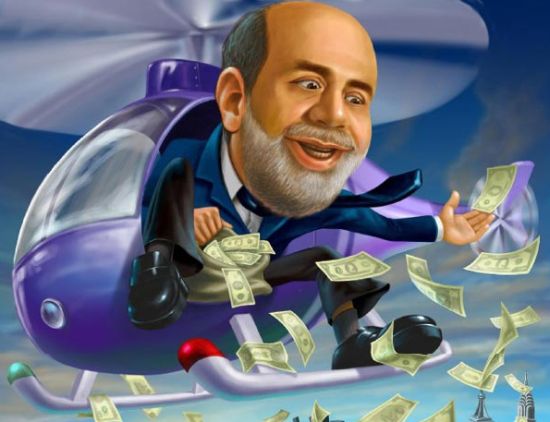 Now
you see it. Now you don’t. QE III is the Fed’s latest scam. A previous
article quoted PIMCO’s Bill Gross. He called it money printing “till the
cows come home.”

After crisis conditions erupted in fall 2007, one scam followed
another. Occupy Wall Street is right. “Banks got bailed out. We got sold
out.” It hasn’t stopped and won’t until either people rebel or the
whole house of cards Greenspan/Bernanke built collapses.

Helicopter Ben operates by Abraham Maslow’s maxim that “if the only tool you have is a hammer, every problem looks like a nail.”

Hammering all day won’t help. He’s buying time. Little else. An
eventual day of reckoning looms. The longer it’s delayed, the greater
the collapse when it comes.

If properly used, QE could have worked and still can if redirected to
where it’s needed. It’s not and won’t be. For nearly five years, credit
went for speculation, big salaries and bonuses. It hasn’t been for the
economy to stimulate growth and create jobs.

Financial warfare rages. America and other societies are affected.
Ordinary people are hurt most. Hard times keep getting harder.

Since September 2007, the Fed cut interest rates from 5.25 to .25%.
Surviving investment banks became commercial ones to get free money
unavailable to ordinary folks.

They scammed trillions. How much is kept secret. It’s at least $9 trillion and may be up to two and half times that much.


Hundreds of billions went to Fannie, Freddie, AIG, the automakers and
others. At the same time, millions lost jobs, homes and futures. Who
cares about them when only money power and helping corporate favorites
matter.

Obama’s $787 billion stimulus went mostly (in the form of tax breaks)
to corporate favorites and rich elites already with too much. QE II
followed QE I, then Operation Twist, and now QE III.

The Fed provided generous back door funding for troubled European
banks. Its balance sheet exploded. At over $2.8 trillion and rising, if
it was a country it would be the world’s fifth largest.

One failed program followed another. Economic duress deepens. Current
US median income is lower than when the National Bureau of Economic
Research declared recession over in June 2009. Perhaps for Wall Street,
not Main Street.

Jobs for millions wanting them aren’t available. Most that are don’t
pay enough to get by. At the same time, vital benefits are eroding when
they’re most needed.

Instead of constructive policies that work, money printing madness
that won’t substitutes. Ellen Brown does some of the best financial
analysis around. On September 21, she discussed why QE III won’t
stimulate growth and what will.

Boosting “aggregate demand” is needed. Getting it takes putting
“money in the pockets of consumers – but QE3 won’t do it.” Better
alternatives aren’t chosen.

QE goes “straight into bank reserve accounts, and banks can’t lend
their reserves.” They sit there helping no one needing it most.
Bernanke’s plan is buy mortgage backed securities (MBS) till the cows
come home.

Doing it won’t help homeowners. Bank balance sheets won’t change nor
will circulating money amounts. QE takes “something on the asset side
of” bank balance sheets (MBS or other toxic junk) “and replaces it with
electronically-generated dollars.”

They become excess reserves. They’re not spent or extended in loans. They’re mostly “lent to other banks that need reserves….”

In other words, money sitting in bank reserves can’t stimulate
growth. Since QE I, the monetary base rose, but circulating money supply
increased no “faster than in the previous decade.” At the same time,
loans declined.

QE II was no different. Why expect QE III to turn around failure. At
the same time, workable alternatives aren’t chosen. What about QE for
small business, troubled states and municipalities, low-interest student
loans, and help for troubled homeowners.

Get it in the coffers and pockets where it’s most needed and will do
the most good. Imagine the difference these alternatives could make.
Whenever they’re adopted, or variations thereof, they work as intended.
Why not now.

Money into the economy in any amount for growth and job creation has
little if any effect on inflation. Why not do what works. It’s not
rocket science. It’s simple truth, and Bernanke knows it.

Of course, he’s Wall Street’s man. They hired him. He does what he’s
told. His concern is their interests. Serving them leaves ordinary
people high and dry. Don’t expect that leopard to change its spots,
except perhaps when the house he built collapses if he’s still around
and accountable.

He called QE III “the most extreme easing of monetary policy” he
could recall. “Monetary policy is about as easy as it can get. Another
round of QE is understandable – but it will fail to fix the problem.”

“There is so much liquidity in the market that adding more is not
going to change the economy.” Banks are hoarding cash. They’re not
lending. They’re speculating or stashing it in tax havens.

Corporations are doing the same thing. Why hire and invest when weak conditions aren’t improving.

Volker said inflation isn’t a problem now, but watch out. “The risk
is that central bankers are not able to tighten policy in time. Will
they be able to pull back fast enough from loose monetary policy?”

The same goes for the ECB, Bank of England and Bank of Japan. They’re
dumping money from helicopters to use Bernanke’s former expression.
Even so, it hasn’t worked.

Don’t expect China to rescue the world, Volker added. Its economy
“slowed 50pc since its peak and is no longer able to support
international growth.”

China equities hit a three and a half year low. Its manufacturing
diffusion index was down for the 11th straight month. In 2012 through
August, its foreign direct investment slumped 3.4% year-over-year. On
September 20, its Commerce Ministry said:

“In general, external demand for China’s
exports will probably be even lower than in January-August since the
global economy is continuing on a downward trend.”

The bloom looks very much off its rose. It’s just a matter of time
until other large economies decline like China. A composite Eurozone
manufacturing and service sector read fell to 45.9. It’s the worst
showing since June 2009.

Dallas Fed President Richard Fisher said all QE III will do is keep
inflation expectations elevated while doing little or nothing to create
growth and jobs.

Overall conditions look much like fall 2007. Only this time, what
good will massive monetary easing do when everything done so far failed?

At the same time, it led to reckless speculation ahead of what Simon
Johnson and Peter Boone call a “doomsday cycle” of shocks, collapses,
and more bailouts.

Europe already is troubled. Don’t look there for help or to Brazil
and India. World economies are either slowing or already in recession.
Markit Economics provides reliable independent data. Its chief economist
said this about Europe:

“The Eurozone downturn gathered further
momentum in September, suggesting that the region suffered the worst
quarter for three years. The flash PMI is consistent with GDP
contracting by 0.6% in the third quarter and sending the region back
into a technical recession.”

“We had hoped that the news regarding the
ECB’s intervention to alleviate the debt crisis would have lifted
business confidence, but instead sentiment appears to have taken a turn
for the worse, with businesses the most gloomy since early-2009 due to
ongoing headwinds from slower global growth.”

“This gloom is clearly reflected in
headcounts falling at the fastest rate since January 2010 as companies
seek to adjust to weaker demand.

“At the same time, input costs have risen
markedly, linked largely to higher oil prices. Weak demand has meant
companies have been unable to pass these costs on to customers, meaning
output prices fell again in September. The combination of higher costs
and lower selling prices will inevitably hit profit margins.”

“Some good news came from an easing in
the rate of contraction in Germany, though the rate of decline
accelerated markedly in France and a deepening downturn was also evident
in the periphery.”

“It remains too early to say, however,
whether Germany will continue to buck the trend, especially as it
continued to see a strong rate of loss of new orders in both
manufacturing and services.”

The implication for world economies is clear. They’re interconnected.
What affects Europe spreads everywhere. Expect worse ahead than 2008.

On September 16, the Global Europe Anticipation Bulletin (GEAB)
headlined “The Global Economy Sucked into the Black Hole of
Geopolitics,” saying:

It’s “no longer possible to hide the global economy’s tragic state behind the pretext of the ‘Euro or Greek crisis.’ ”

All major world economies “are entering recession or slowing growth
simultaneously, leading the socio-economic and financial world into a
black hole.”

As a result, GEAB “maintains its June 2012 Red Alert” ahead of worse
coming. It cites key factors without modern precedent. They’re heading
world economies for a “double shock.”

“Only Wall Street, for a certain time, will be able to continue
surfing on record levels until one ‘beautiful morning’ everything
collapses due to a sudden awareness that the real economy is sinking
into depression.”

“Indeed all the signals are already on red: employment isn’t moving
up, the jobs created are paid very much less than those lost, poverty is
exploding throughout the country….and the US multinationals have
increased announcements of falling profits for the second half of 2012
and 2013, returning to the levels of 2008/009, typical of a recession
period.”

All this is happening against a backdrop of “less-well managed geopolitical challenges.”

If that’s not bad enough, just wait. The worst is yet to come. Only
its timeline isn’t known. If past is prologue, perhaps it’s coming at a
time of irrational exuberance when least expected. It wouldn’t be the
first time.