Viruses - Lots of Them - Are Falling From The Sky

An astonishing number of viruses are circulating around the Earth's atmosphere – and falling from it – according to new research from scientists in Canada, Spain and the U.S.

The study marks the first time scientists have quantified the viruses being swept up from the Earth's surface into the free troposphere, beyond Earth's weather systems but below the stratosphere where jet airplanes fly. The viruses can be carried thousands of kilometres there before being deposited back onto the Earth's surface.

"Every day, more than 800 million viruses are deposited per square metre above the planetary boundary layer—that's 25 viruses for each person in Canada," said University of British Columbia virologist Curtis Suttle, one of the senior authors of a paper in the International Society for Microbial Ecology Journal that outlines the findings. 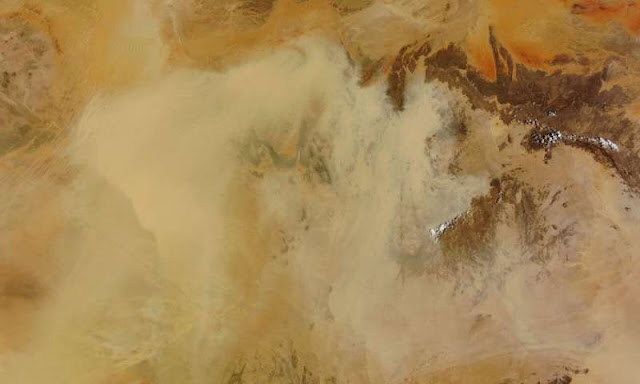 Viruses and bacteria fall back to Earth via dust storms and precipitation. Saharan dust intrusions from North Africa and rains from the Atlantic. Credit: NASA Visible Earth
"Roughly 20 years ago we began finding genetically similar viruses occurring in very different environments around the globe," says Suttle. "This preponderance of long-residence viruses travelling the atmosphere likely explains why—it's quite conceivable to have a virus swept up into the atmosphere on one continent and deposited on another."

Bacteria and viruses are swept up in the atmosphere in small particles from soil-dust and sea spray. 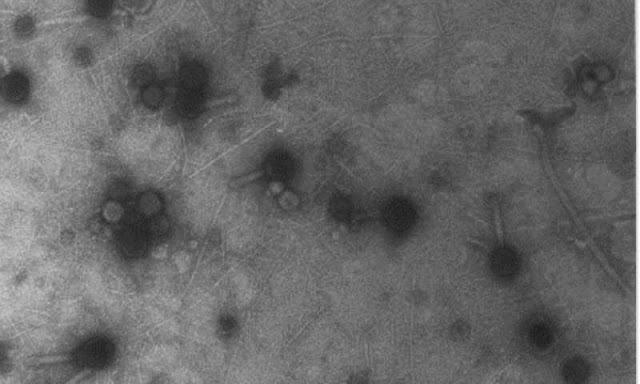 New research may explain why genetically identical viruses are often found in very different environments around the globe. Credit: Curtis Suttle, University of British Columbia
Suttle and colleagues at the University of Granada and San Diego State University wanted to know how much of that material is carried up above the atmospheric boundary layer above 2,500 to 3,000 metres. At that altitude, particles are subject to long-range transport unlike particles lower in the atmosphere.

Using platform sites high in Spain's Sierra Nevada Mountains, the researchers found billions of viruses and tens of millions of bacteria are being deposited per square metre per day. The deposition rates for viruses were nine to 461 times greater than the rates for bacteria.

"Bacteria and viruses are typically deposited back to Earth via rain events and Saharan dust intrusions. However, the rain was less efficient removing viruses from the atmosphere," said author and microbial ecologist Isabel Reche from the University of Granada.

The researchers also found the majority of the viruses carried signatures indicating they had been swept up into the air from sea spray. The viruses tend to hitch rides on smaller, lighter, organic particles suspended in air and gas, meaning they can stay aloft in the atmosphere longer.

Posts : 3470
Join date : 2012-02-10
Age : 66
Location : Florida
Think about the viruses and Morgellons diseases from planes via chemtrails that are constantly being dumped on everyone, along with the flu shots that they beg people to get, and everyone wonders why ALL of the united states is inundated with the flu virus, and flu shots killing children and adults, ever think of that?- It has been said that when Trump was inaugurated, that the deep state and the air national guard, along with the air force, was going to ramp the chemtrails up, but what these idiots don't know, is that they will eventually be arrested, and charged with crimes against humanity, and will face a military tribunal, found guilty, and executed under military law, and personally, I can't wait- Maybe they will televise it in the months to come, with any luck-

» VIRUSES FALLING FROM THE SKIES #WEATHER WARFARE LIVE!! #ANALYSIS
» Acid Rain falling over Hawaii - Green leaves falling off trees - LAVA falling
» Accountability – Hold On To Your Hats! The Dominoes Are Falling … and Falling and Falling
» Groundbreaking Research Indicates That What We Think We Know About Viruses Is a Lie
» 16 Tips on Boosting Your Immune System Against Any & All Viruses