OUT OF MIND » TRUTH IN CONSPIRACY THEORIES? » HISTORIES MYSTERIES » The Megalithic Stone Heads Of Mount Nemrut And The Gate Of Heaven

Located in Southeastern Turkey, more than 2,000 meters above sea level on Mount Nemrut, lie the ancient ruins of the lost Kingdom of Commagene.
Thousands of years ago, to be more precise in 62 BC, Kling Antiochus erected a mysterious royal sanctuary there and made sure it would forever be remembered.
Supermassive statues of lions, Eagles, Persian and Greek Gods, as well as sculptures of the king himself, were built imposingly.
Three terraces, to the North, East, and West, surround the 50 meters high mound (145 meters in diameter) formed by small limestones:
On the East terrace, we find two rows of stone stelae with sculptures in relief: one of them with the Macedonian ancestors of Antiochus I and another with their Persian ancestors.
On the west terrace, there is also a row of stelae, where Leo’s horoscope and Antiochus I himself is shown shaking hands with a deity.
On the north terrace, the existing stelae have neither reliefs nor inscriptions. 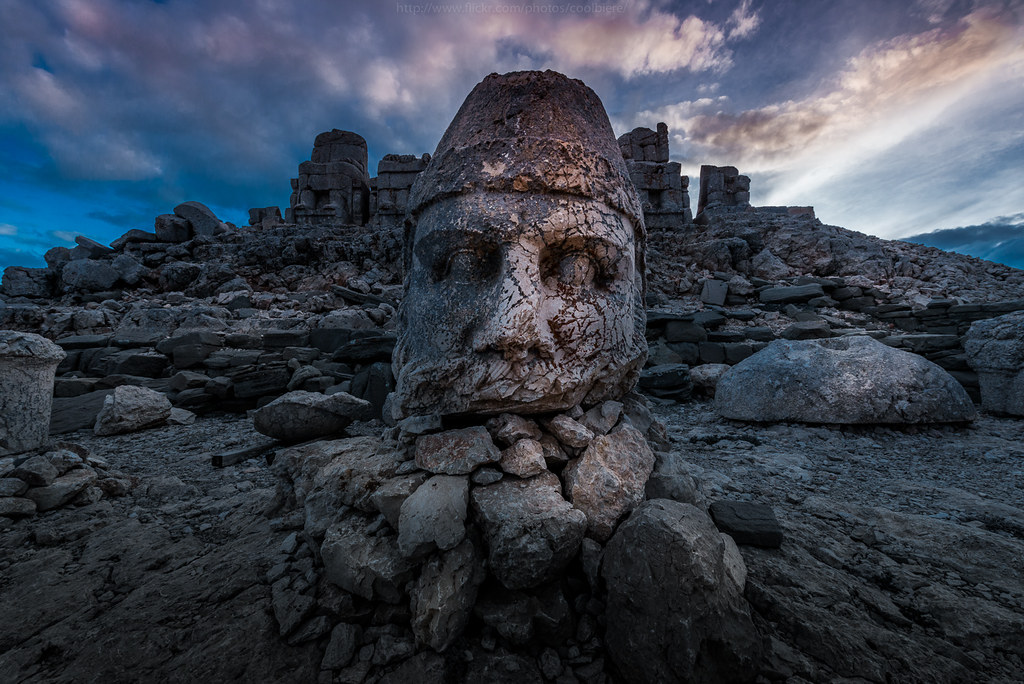 Antiochus I of Commagene had a funerary burial mound built on top of the mountain flanked by huge statues (8-9 meters high) of himself. In addition, to massive statues depicting the King as one with the Gods, two lions, two eagles and different Armenian, Greek and Persian gods, such as Hercules, Zeus, Oromasdes (associated with the Persian god Ahura Mazda), Tique and Apolo-Mitra were also built at the site.
Archaeologists have found evidence that the statues were once seated, with names of each god inscribed on them.
Now, the heads of the statues are scattered on the ground; damage to the heads (especially the noses) suggests that they were deliberately produced by iconoclasts.
There are also stone slabs with bas-relief figures that are thought to have been part of a large frieze. Statues that depict King Antiochus shaking hands with the ‘Gods,’ as if the gods recognize him as one of their own, welcoming him to the stars.
This royal sanctuary, as well as the kingdom, were strangely abandoned in the first century AD.
So far, experts have not discovered the king’s legendary burial chamber.

Researchers did, however, find a shaft that King Antiochus had built into the mountain, which according to experts, displays exceptional knowledge of advanced astronomy.
The shaft runs into the mountainside at an angle of 35 degrees to the horizontal, and it is believed to be about 150 meters long. Curiously, there’s nothing at the bottom.
Computer analysis has revealed that on two days of the year, the sun’s rays would illuminate the bottom of the shaft; once when in line with the constellation of Leo and once when in line with Orion. 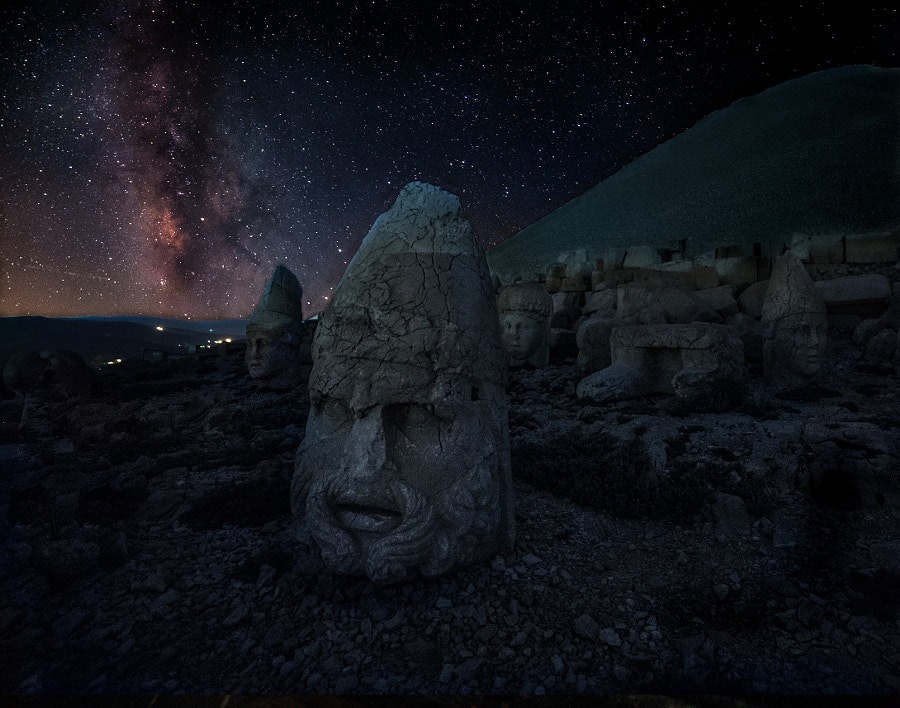 This is a particularly exciting area in the night sky since it happens to be the path where the sun crosses over the Milky Way galaxy.
Curiously, this to the ancient world was known as the Gate of Heaven.
Even more interesting is the fact that there were Gates to Heaven; one where they cross in the north and the other where they cross in the south.
Featured image credit: Shutterstock.

OUT OF MIND » TRUTH IN CONSPIRACY THEORIES? » HISTORIES MYSTERIES » The Megalithic Stone Heads Of Mount Nemrut And The Gate Of Heaven