My take on North Korea - Endless war is profitable 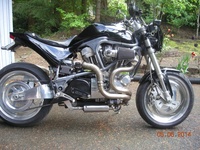 Posts : 41
Join date : 2018-02-08
Location : Seattle, USA
Hello Friends,
I just wanted to chime in on this "North Korea" subject.
It is the USA that has kept the Korean War going since 1953 with no hope for actual peace or reunification.
My first tour of duty was on the Korean DMZ in 1979. The Koreans want to reunify. Many have family members on opposite sides of the border.
It is WE (THE USA) who REFUSE to promote or accept a "Peace Agreement". The Korean War has been a "ceasefire" since July of 1953.


All you non-veterans can spew your nonsense about how Kim is a "dictator", a "murderer", a "despot" etc.. He probably IS for THEM.
And yes, life is hard for NK citizens, like many places on earth.
Though I doubt the North Korean Elites have killed or tortured anymore of their own citizens than say Hitler, Pol Pot, Stalin, Mao, Saddam, Idi Amin Dada and MANY more.

Meanwhile, North Korea has done NOTHING "Aggressive" OUTSIDE IT'S OWN BORDERS in almost 65 years.
The USA has never ceased to be at war for my entire 58 year life, while the US GOVERNMENT still has 82% of ALL living Native Americans living on RESERVATIONS and we killed well over 100 million of them in the 1800's before we put them there.
This is the "pot calling the kettle black"... part 1

As a USMC E-7 Ret.(1978-2003), I personally have killed more "enemy" soldiers/terrorists/insurgents in foreign countries (Iraq, Afghanistan, Bosnia, Somalia, Lebanon) than all of North Korea combined since 1953, as the total for North Korea is somewhere near ZERO.
The USA has 100's of military bases spread all over the globe and is currently AT WAR in 6 different countries that I am aware of. All for natural resources belonging to sovereign nations.

WHAT OTHER COUNTRY DOES THIS?
I love being born and raised AMERICAN, and I am not saying that Kim is a "great leader" or a "good guy" by any means. But he has not EARNED A WAR..and he has not sacrificed the lives of his soldiers in WARS FOR PROFIT worldwide like OUR "leaders" have done my entire life.
These include many personal friends, and my own brother who was killed on his 2nd tour by "friendly fire" in Vietnam while serving this nation and doing his duty.
The Military/Industrial Complex has bankrupted our country for generations to come, both financially and morally with no end in sight.
Now, before you "Armchair Generals" throw stones, you may want to check the glass that makes up your/OUR house.
You may also consider taking a step back from this "get Korea" stance as there is NO WAY the USA can take on North Korea at this time with our current military spread out globally, badly supplied and low in overall moral, discipline and training. That ship sailed over 35 years ago if it was ever actually possible.
Unless WE NUKE THEM, and that gains US (you and I) nothing but millions dead, and the IRE of the entire world.


USMC Major General Smedley Butler wrote a book in 1935 called "War is a Racket".
He was right.

In the year of 2000 there were seven countries without a Rothschild owned Central Bank:

The only countries left in 2003 without a Central Bank owned by the Rothschild Family were:

The only countries left in 2011 without a Central Bank owned by the Rothschild Family are:

Hold on to your horses....They will both fall!

Posts : 41
Join date : 2018-02-08
Location : Seattle, USA
Excellent.
I am not sure about either falling now.
NK has Russia and China on it's borders, a huge standing army and tons of missiles and artillery. Even if they are attacked, they will level Seoul in 30 minutes.
Iran has not been conquered since Alexander the Great in 330 BC and that took 10 years.

I always laugh when I hear people refer to Iran's revolution as "islamic revolution"..It was a revolution to kick out the Rothschild banksters and Standard Oil.
I was actually pulled off the DMZ and spent 5 months on a LST in the Gulf while the hostage crises was being sorted out.
They never hurt any of the hostages, and returned them all.
Many countries have tried to rid themselves of the globalist chains, Iran succeeded.
Have a great day,
G

Posts : 1826
Join date : 2012-02-15
Age : 66
Location : Ct
Good Info Gunny, and again you are correct..But these guys bombed Syria, Libya and northern Africa in an attempt to force migration and destabilize the EU, which has been very successful.  They will come up with a plan, its just a matter of time...The economic move east is a well laid out plan...We shall see...

Posts : 41
Join date : 2018-02-08
Location : Seattle, USA
Thank you brother, and thanks for your service as well.
I agree, these dirtbags will kill as many as it takes to fulfill their goals.
Libya is the real crime scene, Ghadaffi had Libya doing so great, then he decided our toilet paper money was not a good trade for his oil, and 3 months later he was dead in the streets.
We need to march on DC and end this charade for our children's sake..IMO.
God bless and Carry on,
G