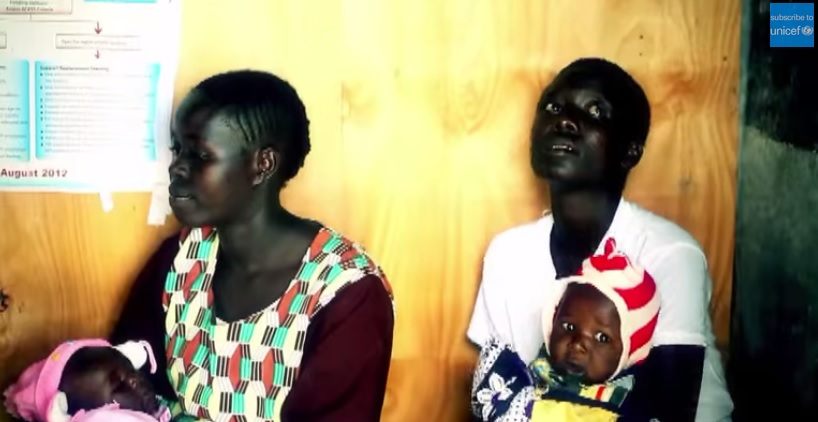 Image from UNICEF YouTube Video
by Christina England
Health Impact News
According to a growing number of reports, Agriq-Quest Ltd, the Nairobi based testing laboratory appointed by the Kenyan Ministry of Health and the Catholic Health Commission to carry out analysis on selected vials of the tetanus toxoid vaccines to determine whether or not they contained the anti-fertility hormone hCG, have had their license suspended.
Interestingly, the allegation that their license was suspended came a full two years after they had presented their findings, and representatives from the laboratory have told Health Impact News that their license is still intact.

In 2014, doctors from the Kenyan Catholic Doctors Association discovered that the tetanus vaccinations that had been administered to 2.3 million girls and women by the World Health Organization and UNICEF had been contaminated with the anti-fertility hormone hCG.
Human chorionic gonadotropin, or hCG, is a hormone produced naturally in pregnancy to encourage the development of the growing fetus. However, when hCG is combined with the tetanus toxoid carrier in tetanus vaccinations, it causes a pregnant woman to produce antibodies against the pregnancy and leads her to miscarry.
In September of 2017 APA News in Kenya reported that at least 500,000 young girls and women may be infertile, following a tetanus vaccine administered by the government in 2014 and 2015:

“Today, we can confirm to the country that the Catholic Church was right. Hundreds of thousands of our girls and women, aged between 14 and 49, from the fastest growing populations in the country will not have children, because of the state-sponsored sterilization that was sold to the country as tetanus vaccination,” Odinga declared.

Odinga further charged that they accessed the analysis from four highly-regarded institutions, such as AgriQ Quest Ltd, the Nairobi Hospital Laboratories, the University of Nairobi and Lancet Kenya.

Business Daily Africa reported that the laboratory testing the vaccines has lost its license:

An industrial laboratory that was embroiled in controversy with the government last year has had its licence suspended.
The Kenya Accreditation Service (Kenas) announced that it suspended Agriq-Quest Ltd’s licence this month.
The Nairobi-based company came into the limelight mid last year in a dispute with the Ministry of Health over a controversial tetanus and polio vaccination.

“Kenya’s opposition leader Raila Odinga said girls and women aged between 14 and 49 from the fastest growing populations in the country will not have children, because of a state-sponsored sterilization exercise that was sold to the country as a tetanus vaccination.
The Catholic Church was ignored when it mounted a strong but lonely campaign against the mass tetanus vaccination, after it raised concerns about the safety of the vaccine that was being used, he said.
At the time, the Catholic Church in Kenya claimed that the tetanus vaccine used by the government of Kenya and UN agencies was contaminated with a hormone (hCG) that can cause miscarriages and render some women sterile.”

The Agence de Presse Africaine stated that Odring confirmed the vaccines were contaminated with the hCG hormone:

“Today, we can confirm to the country that the Catholic Church was right. Hundreds of thousands of our girls and women, aged between 14 and 49, from the fastest growing populations in the country will not have children, because of the state-sponsored sterilization that was sold to the country as tetanus vaccination.”

A further report published by Business Daily Africa, stated that when their reporters had spoken to the CEO of Agriq-Quest Ltd, Mr. Fredrick Muthuri, on the telephone, he informed them that that his company was in dispute over the suspension, due to “foul play.”
However, they followed up with this statement by adding that a former employee of the company, who wished to remain anonymous, had stated that:

“The lab lacked capacity to carry out the tests it was handling for its clients, including the Ministry of Health and several industries such as Tullow Oil Plc and purified drinking water manufacturers.”

According to Agriq-Quest Ltd, they presented the results of their findings in January 2015. Their presentation to the Joint Committee of experts, confirmed categorically that the vaccinations tested did contain the anti-fertility hormone, hCG.
If this is correct, then it would mean that the Kenyan Ministry of Health knew that the tested vaccinations contained hCG, two years before Agriq-Quest had their license suspended.

Posts : 3471
Join date : 2012-02-10
Age : 64
Location : Florida
Enter Bill Gates and BIG pharma- It looks like to me that is their idea of 'crime prevention' along with their sick thoughts of killing all black women over there- Bill Gates AND BIG pharma will get their come uppance, the rotten bastards......