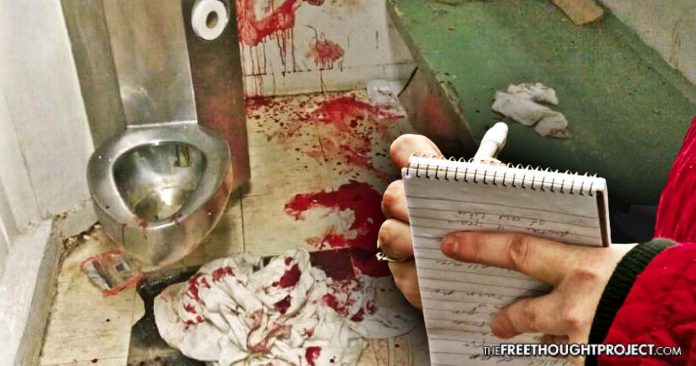 San Diego, CA — Even though the First Amendment of the US Constitution states “Congress shall make no law…abridging the freedom of speech, or of the press,” one California reporter says she has been targeted by San Diego County for her investigative reports detailing extraordinary number of deaths of inmates in the county’s jails. Local journalist and Voice of San Diego (VOSD) contributor Kelly Davis has been pressured to reveal her sources and has been hauled in to court to defend her reporting.
In what is shaping out to be a clear violation of the Constitution, Davis’ report chronicled 60 inmate deaths in local jails from 2007 to 2012. The report should have been a wake-up call for jailers to work harder to keep people from getting killed or committing suicide while in custody, but VOSD said it was anything but a call to action.

Instead, the county’s attorney’s turned their attention and set their sights on one of the reporters covering the story. “They’ve upended her life, forcing her to do one of three things — expose sources by testifying about her work, agree to a deal that would protect her fragile health at the expense of harming the widow’s case or fight back,” writes VOSD.

In a blatant overreach of government, the attorneys issued several demands of the journalist:

The county demanded that Davis give testimony in a deposition and provide all the documents, notes and recordings that she used in her reporting about the county’s high jail mortality and suicide rates. It also demanded her communications with the widow’s attorneys regarding jail suicides.

Davis refused. Not only is she fighting to save her career and her independent rights to reporting without disclosing sources, she’s also fighting an advanced stage of breast cancer. She wonders openly if lawyers are trying to intimidate her.


I am just wondering if they are trying to intimidate me.

Davis got roped into a lawsuit brought about by Kris Nesmith’s widow. Nesmith, a veteran committed suicide while in jail, despite being warned by his widow he was suicidal. The county then named Davis as a party in the lawsuit and demanded Davis’ notes, statistics, interviewee’s names—everything she had on the deaths taking place in the jails. Her lawyers contended the data was a matter of public record and she would not turn over her private journalist files.
For the moment, the judge is on Davis’ side, telling the county the news stories should have been a wake-up call for the county to take action and implement a proper suicide-prevention policy.

It is plausible that if the County had reacted to the prior suicide incidents by implementing an appropriate suicide prevention policy or by remedying the alleged custom of indifference, Kris’s suicidal ideations would not have been ignored.

Earlier this month, the judge also ruled Davis would not have to disclose any information to the county’s lawyers. Davis was relieved and told reporters:

You want journalists to be free to do their stories and to gather their research, talk to their sources, without worrying that someone is looking over their shoulder.

While Davis’ case may seem like an isolated one, news media organizations all across the United States are under attack, particularly accused of being purveyors of “fake news” and threatened with censorship. Facebook, which used to be known for allowing freedom of speech from differing points of view, has recently implemented its new “algorithm” which supposedly chooses for its users what news they should see.

Predictably, alternative points of view have been weeded out to disallow the previously permitted free speech of its content creators. The measure has hurt the freedom of the press to disseminate the news. For now, Facebook is getting away with it. However, lawsuits will likely decide just how far, like San Diego County, Facebook can go to prevent the free exercise of the press.