OUT OF MIND » THE INSANITY OF REALITY » GOVERNMENTS & THE NEW WORLD ORDER » US calls Assange ‘enemy of state’ – We’re talking about freedom of the press here, folks!!!!

US calls Assange ‘enemy of state’ – We’re talking about freedom of the press here, folks!!!! 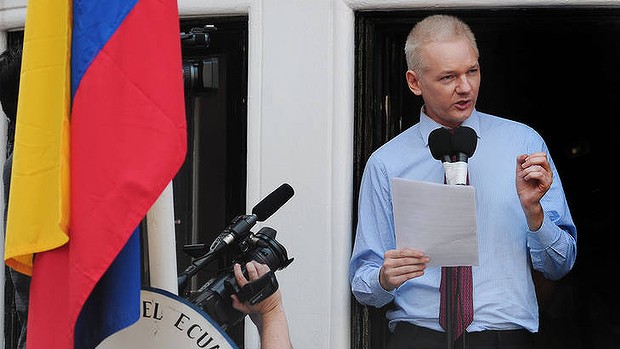 
THE US military has designated Julian Assange and WikiLeaks as
enemies of the United States – the same legal category as the al-Qaeda
terrorist network and the Taliban insurgency.

Declassified US Air Force counter-intelligence documents, released
under US freedom-of-information laws, reveal that military personnel who
contact WikiLeaks or WikiLeaks supporters may be at risk of being
charged with “communicating with the enemy”, a military crime that
carries a maximum sentence of death.

The documents, some originally classified “Secret/NoForn” — not
releasable to non-US nationals — record a probe by the air force’s
Office of Special Investigations into a cyber systems analyst based in
Britain who allegedly expressed support for WikiLeaks and attended
pro-Assange demonstrations in London.

The counter-intelligence investigation focused on whether the
analyst, who had a top-secret security clearance and access to the US
military’s Secret Internet Protocol Router network, had disclosed
classified or sensitive information to WikiLeaks supporters, des-cribed
as an “anti-US and/or anti-military group”.

The analyst’s access to classified information was suspended.
However, the investigators closed the case without laying charges. The
analyst denied leaking information.

Assange remains holed up in Ecuador’s embassy in London. He was
granted diplomatic asylum on the grounds that if extradited to Sweden to
be questioned about sexual assault allegations, he would be at risk of
further extradition to the US to face espionage or conspiracy charges
arising from the leaking of hundreds of thousands of secret US military
and diplomatic reports.

US Vice-President Joe Biden labelled Assange a “high-tech terrorist”
in December 2010 and US congressional leaders have called for him to be
charged with espionage.

Sarah Palin and Mike Huckabee – both once involved in presidential campaigns – have both urged that Assange be “hunted down”.

Assange’s US attorney, Michael Ratner, said the designation of
WikiLeaks as an “enemy” had serious implications for the WikiLeaks
publisher if he were to be extradited to the US, including possible
military detention.

US Army private Bradley Manning faces a court martial charged with
aiding the enemy – identified as al-Qaeda – by transmitting information
that, published by WikiLeaks, became available to the enemy.

“However, in the FOI documents there is no allegation of any actual
communication for publication that would aid an enemy of the United
States such as al-Qaeda, nor are there allegations that WikiLeaks
published such information,” he said.

“It appears that Julian Assange and WikiLeaks are the ‘enemy’. An
enemy is dealt with under the laws of war, which could include killing,
capturing, detaining without trial, etc.”

The Australian government has repeatedly denied knowledge of any US intention to charge Assange or seek his extradition.

However, Australian diplomatic cables released to Fairfax Media under
freedom-of-information laws over the past 18 months have confirmed the
continuation of an “unprecedented” US Justice Department espionage
investigation targeting Assange and WikiLeaks.

The Australian diplomatic reports canvassed the possibility that the
US may eventually seek Assange’s extradition on conspiracy or
information-theft-related offences to avoid extradition problems arising
from the nature of espionage as a political offence and the free-speech
protections in the US constitution.

Assange is scheduled this morning to speak by video link to a meeting
on his asylum case on the margins of the United Nations General
Assembly in New York. The meeting will be attended by Ecuadorean Foreign
Minister Ricardo Patino.

In a separate FOI decision yesterday, the Department of Foreign
Affairs confirmed that the release of Australian diplomatic cables about
WikiLeaks and Assange had been the subject of extensive consultation
with the US.

OUT OF MIND » THE INSANITY OF REALITY » GOVERNMENTS & THE NEW WORLD ORDER » US calls Assange ‘enemy of state’ – We’re talking about freedom of the press here, folks!!!!