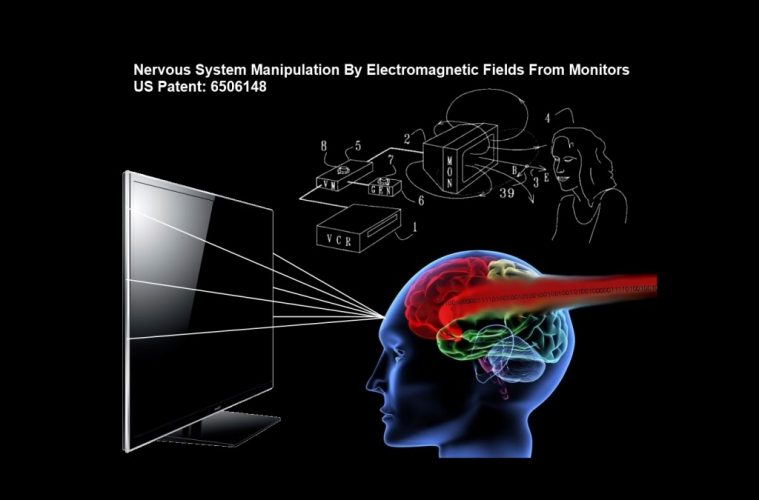 It’s hard to find any information at all on a one “Hendricus G. Loos,” despite the fact that he’s filed multiple patent applications, with success, for apparatuses that deal with the manipulation of the human nervous system via a computer screen or a television monitor. In the abstract, he explains the following,

“Physiological effects have been observed in a human subject in response to stimulation of the skin with weak electromagnetic fields that are pulsed with certain frequencies near ½ Hz or 2.4 Hz, such as to excite a sensory resonance. Many computer monitors and TV tubes, when displaying pulsed images, emit pulsed electromagnetic fields of sufficient amplitudes to cause such excitation. It is therefore possible to manipulate the nervous system of a subject by pulsing images displayed on a nearby computer monitor or TV set. For the latter, the image pulsing may be imbedded in the program material, or it may be overlaid by modulating a video stream, either as an RF signal or as a video signal. The image displayed on a computer monitor may be pulsed effectively by a simple computer program. For certain monitors, pulsed electromagnetic fields capable of exciting sensory resonances in nearby subjects may be generated even as the displayed images are pulsed with subliminal intensity.”
The concerning thing about this, as the patent application explains, is that even a very weak pulse can have adverse affects on the human nervous system.
He then goes on to describe that pulse variability and strength can be controlled through software, and explains how, with regards to a computer monitor, DVDs, video tapes and more, and also how it can be remotely controlled from another location.
Perhaps the most concerning part is this,
“Certain monitors can emit electromagnetic field pulses that excite a sensory resonance in a nearby subject, through image pulses that are so weak as to be subliminal. This is unfortunate since it opens a way for mischievous application of the invention, whereby people are exposed unknowingly to manipulation of their nervous systems for someone else’s purposes. Such application would be unethical and is of course not advocated. It is mentioned here in order to alert the public to the possibility of covert abuse that may occur while being online, or while watching TV, a video, or a DVD.” 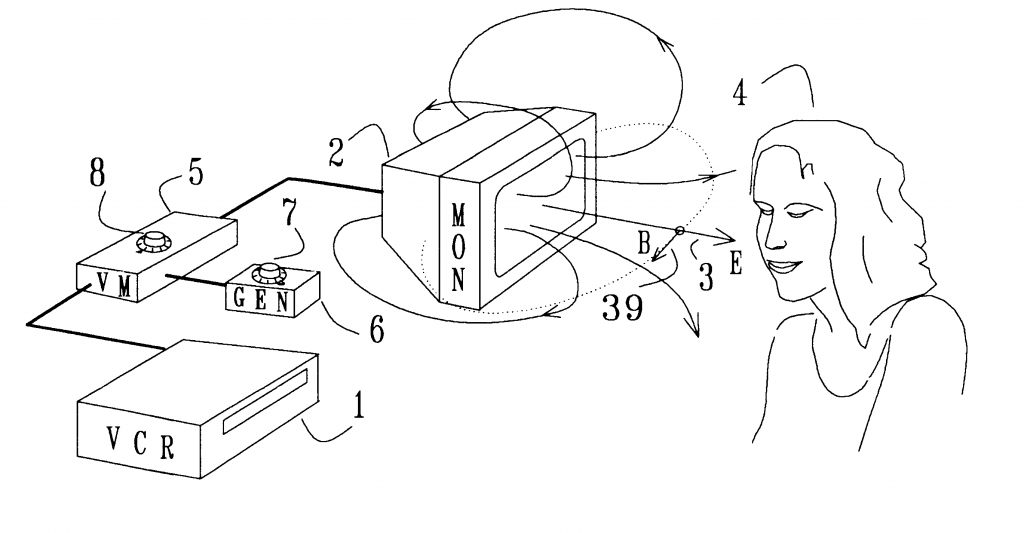 The application is full of cited examples that the “nervous system of a subject can be manipulated through electromagnetic field pulses emitted by a nearby CRT or LCD monitor which displays images with pulsed intensity.”
Our nervous system basically controls everything in our body, including the brain. It’s a network of nerves and cells that carry messages to and from the brain and spinal cord to various parts of the body, and it’s no secret that the United States government, among others, have a long history of experimenting on human beings for mind control purposes. Could television be a mind-control tactic? It would explain why so many people believe stories and explanations of events presented to them by mainstream media, instantaneously, without even questioning.
In some cases, we are made to idolize what we see on T.V, like celebrities, and imitate behaviour and wants.
Sometimes, a perspective that’s backed by evidence, which completely counters the story and information we receive from mainstream media, is thrown into the “conspiracy realm.” This is dangerous, have we reached a point where our televisions are doing the thinking for us? Could they be using pulse techniques described above to influence our thoughts, behaviours and perceptions?
Given what we know about our governments and the unethical actions they’ve taken throughout history, it’s really not out of the question.
There is a reason why airplanes and hospitals ban the use of cell phones, it’s because their electromagnetic transmissions interfere with critical electrical devices. The brain is no different, it’s a bioelectric organ that’s extremely complex and  generates electric fields.  Scientists can actually control brain function with transcranial magnetic stimulation (TMS), a technique that uses powerful pulses of electromagnetic radiation beamed into a person’s brain to jam or excite particular brain circuit.
This is the same type of thing described in the patent, so to what extent are our computer monitors and television screens doing this? This is why, for example, when somebody turns on their Sony Playstation, the screen warns them to read the important health information before playing. Research has also shown that simple cell phone transmissions can affect a person’s brainwaves quite significantly, which in turn leads to effects on their behaviour as well.
“Electromagnetic radiation can have an effect on mental behaviour when transmitting at the proper frequency.” – James Horne , from the Loughborough University Sleep Research Centre (source)
Not only this, but hundreds of scientists have come together, and are currently creating awareness on and petitioning the United Nations about the health effects of electromagnetic radiation. They’ve been linked to cancer, and have been shown to manipulate our DNA. You can read more about that here.
The initiative was started by Dr. Martin Blank, Ph.D., from the Department of Physiology and Cellular Biophysics at Colombia University, who has joined a group of scientists from around the world making an international appeal to the United Nations regarding the dangers associated with the use of various electromagnetic emitting devices, like cells phones and WiFi.
“Putting it bluntly they are damaging the living cells in our bodies and killing many of us prematurely,”said Dr. Martin Blank, from the Department of Physiology and Cellular Biophysics at Columbia University, in a video message.
“We have created something that is harming us, and it is getting out of control. Before Edison’s light bulb there was very little electromagnetic radiation in our environment. The levels today are very many times higher than natural background levels, and are growing rapidly because of all the new devices that emit this radiation.”
This information is a separate effect on the body from mind control, but it’s still important to mention and bring light to.
Not only are our electronic devices monitoring, watching, and recording everything we do, they may also be influencing our behaviour, perceptions, thoughts and feelings on a large-scale as well, but who really knows if “the powers that be” are using these devices for mind control, in the same way they use them for surveillance.
Don’t get me wrong, it’s not hard to see how corporations use television to influence our behaviour and perceptions, but perhaps they, and other authorities, are changing things around, as mentioned above, and manipulating our nervous systems purposefully for their own personal gain, and knowingly do so.
Chamath Palihapitiya, the vice-president for user growth at Facebook prior to leaving the company in 2011, said, “The short-term, dopamine-driven feedback loops that we created are destroying how society works. . . . No civil discourse, no cooperation, misinformation, mistruth.” So, we are seeing a similar type of thing there as well.”

When it comes to mind control, project MK ultra was the CIA’s baby. It’s commonly believed that it was only LSD that was used on human test subjects, but that was just one program. As the ]US Supreme Court brought to light in 1985, MK ultra consisted of 162 different secret projects that were indirectly financed by the CIA, and contracted out to several universities, research foundations and similar institutions.” The majority of the MK Ultra records were actually destroyed, and have never been seen.
Perhaps television programming was a part of the MK Ultra program?

It’s hard to fathom the idea that we could be manipulated and used so much, for the purposes of profit, control, and other agendas, but it’s a reality we have to face. There are limitless examples of this throughout history all the way up to the modern-day, and all aspects of human life seem to be controlled by a select group of very few people from health, to finance, education, entertainment, big food and more. We’ve become tools for their use, and our thoughts, behaviours, and perceptions, for the most part, seem to be the same. If they’re a little different, or don’t really fit the frame, one can instantly be labelled, or become a ‘social outcast.’
There is no doubt in my mind that our Television, and other electronic devices has detrimental health effects, and that they do/can effect our nervous system in several different ways. The science on this is clear, but what is not so clear is the idea that there are others using these techniques, knowingly, to control our minds.
Based on all of my research into mind control ,and the actions our governments have taken and to what extent they’ve taken them to, I would be surprised if Television was not apart of the MK ultra program.
All and all, it’s another great recent to spend less time in-front of your screen, and more time with a book or spending time outside, or with family and friends. If there is one thing that’s for sure, our screens are detrimental to our health in several different ways.