OUT OF MIND » THE INSANITY OF REALITY » POISON PLANET » The Church of the Almighty Smart Phone is Making Us Really, Really Sad (And Maybe Even Kind of Stupid)

The Church of the Almighty Smart Phone is Making Us Really, Really Sad (And Maybe Even Kind of Stupid)

The Church of the Almighty Smart Phone is Making Us Really, Really Sad (And Maybe Even Kind of Stupid) Sat Feb 24, 2018 7:58 pm

Admin
Posts : 106749
Join date : 2012-01-04
Location : Woodstock Nation
The Church of the Almighty Smart Phone is Making Us Really, Really Sad (And Maybe Even Kind of Stupid)

Featured art by Pawel Kuczynski
Last Sunday, my boyfriend and I were out for coffee, brunch, and some sort of fun thing. As we walked into our favorite cafe, a young man stepped quickly toward me, staring at the phone in his hand. Just before he slammed into me, I raised my hands and clapped them in his face.
He looked up for a split second and he barely flinched. But he at least swerved out of the way and a collision was avoided. My boyfriend laughed. I didn’t.
It used to be that walking the streets involved little more than moving to the right to accommodate other pedestrians, and watching for cars and the odd cyclist who took over the sidewalk. Now, walking down the sidewalk means maneuvering in between people who choose to live the majority of their lives immersed in a box approximately 6 inches by 3 inches that beeps, flashes, and vibrates. Wherever they are, whatever they are doing, the world, for them, resides in a compilation of glass, metal, and plastic. I can’t count the number of times I’ve had to call out to a person coming toward me with their eyes glued to a screen so that they didn’t take me out.
What looks like an ideal way to keep us in contact is actually driving us apart – everywhere you go, there are people on their phones, together. I can’t even count the times I have seen couples sitting at a table in a restaurant, not talking to each other but typing away, almost oblivious to the other’s presence. And how horrifying it is to see people texting as they drive their car? My brother-in-law’s older brother will now spend the rest of his life in a wheelchair because he was t-boned by a truck driven by a man who was texting – and killed by his own distracted driving.
In days past, people interacted with the outside world. Now, they focus on the world contained in their cell phone. Facebook, Twitter, Instagram, Snapchat, Whatsapp, etc. are amazing tools to connect and share – in theory. But while social media is a way for people to relate to each other, it also offers an opportunity for them to present their idealized selves, living their ‘best life’. Keeping up that facade results in a special kind of stress. Studies done on heavy social media users report elevated levels of negative self-worth.
Blame it on the jolt of dopamine that hits when someone ‘likes’ your post, which leads to a Pavlovian response to notifications – and a constant need to check to see if there is one. The New York Post reports that: Americans check their phone on average once every 12 minutes – burying their heads in their phones 80 times a day. In fact, overuse of smartphones has been linked to a decrease of the neurotransmitter gaba, which causes an increase in feelings of anxiety and dread, and can lead to depression.
And it can only get worse. The number of mobile phone users in the world is expected to pass the five billion mark by 2019 from 2.2 billion in 2005. According to the World Health Organization, more than 300 million people are now living with depression, an increase of more than 18% between 2005 and 2015. Is there a link between the rise in smartphone use and the worsening of our mood? And are we addicted?
Smartphone addiction is no joke. In fact, smartphone addiction was added to the DSM (Diagnostic and Statistical Manual of Mental Disorders) in 2013. Dr. Gabor Maté, a Vancouver, BC based addictions specialist and author of the book In the Realm of Hungry Ghosts: Close Encounters with Addiction, proposes that any behavior that a person craves and finds pleasure or temporary relief in, but can’t give up, and has long-term negative consequences, is an addiction.


“People have very empty lives. They feel a void inside themselves and they try to fill it from the outside. You go on your cell phone, you go on YouTube; you distract yourself from the sheer discomfort of being with yourself.” – Gabor Maté 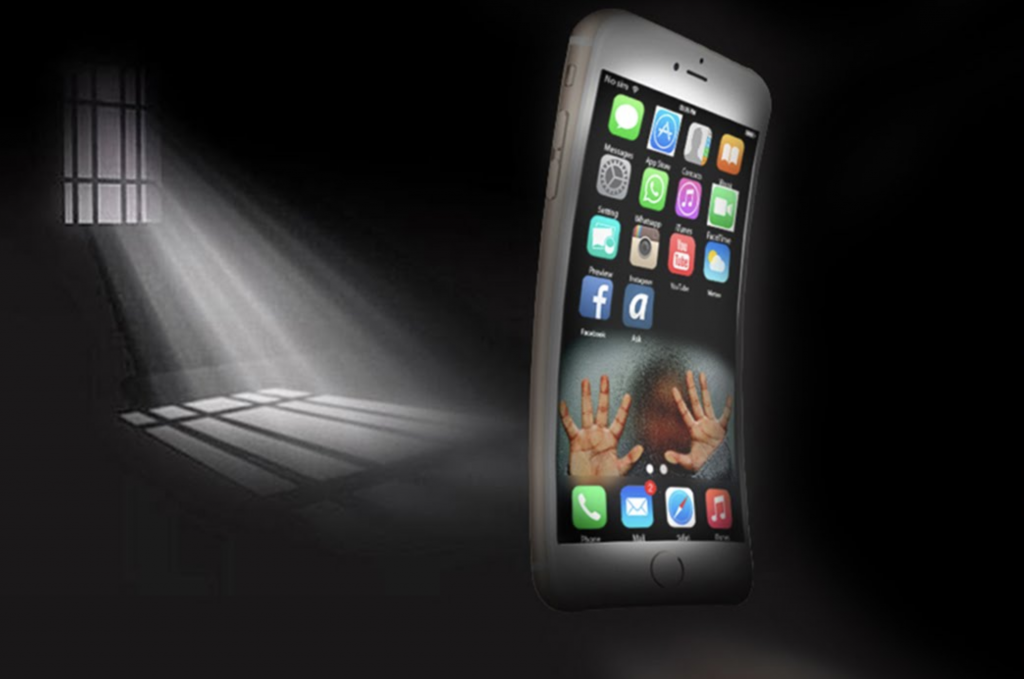 That fear of the void is real. So is the fear of being ‘disconnected’. Nomophobia (or NO MObile PHOne phoBIA) is the fear of not being able to use your cell phone or other smart device. How do you know if you’re addicted? You can take this online quiz to find out.
As we attempt to protect ourselves from feeling alone, we are quite possibly eroding not only our existing ability to socialize but also harming our brains in the process. And, we’re creating a vacuum in which we think we’re receiving information (which is NOT knowledge, child) that is at risk of being biased. When Google introduced Google Personalized Search in 2004, it was sold as a way to create a more personalized googling experience, but often creates what is referred to as a ‘filter bubble’. A filter bubble, according to Wikipedia, is a state of intellectual isolation that can result from personalized searches when a website algorithm selectively guesses what information a user would like to see based on information about the user, such as location, past click-behavior and search history. As a result, users become separated from information that disagrees with their viewpoints, effectively isolating them in their own cultural or ideological bubbles.
You’ll also find the filter bubble in your Facebook feed; we can unfollow – or unfriend – those whose posts we don’t resonate with – or like. But experts in Artificial Intelligence cite bias as a serious danger because of its ability to shape they way news and events are presented to us thanks to algorithms that aren’t always accurate (like when Google identified two African American men as gorillas). If we’re only seeing what we are accustomed to seeing in an echo chamber created by our likes and searches, how are we able to grow and learn? And when the self discovery that comes from being exposed to an unfamiliar person, place, or thing goes out the window, what happens to our ability to cultivate empathy and compassion?


(Technologies such as social media) lets you go off with like-minded people, so you’re not mixing and sharing and understanding other points of view … It’s super important. It’s turned out to be more of a problem than I, or many others, would have expected. – Bill Gates in Quartz

An overly focused point of view through the screen of a device can lead to a decreased worldview – and that can turn into a spiritual myopia as we view the world as we want to see it, not as it is. How many of the billions of smartphone users are aware of the intense impact that mining for the minerals needed to fire up your phone’s many features will have on certain countries? Or how workers building the phones are being paid wages that wouldn’t even allow them to buy the product they assemble? From the ‘Resource Curse’ of coltan in the Congo to the suicides caused by inhumane working conditions at the Longhua complex where your iPhone probably came from, we must be mindful of the reality that our conveniences are often paid for by the sacrifices of others. Yes, these are negative realities that many don’t want to think about. But ignoring a reality doesn’t make it go away, even if you feel helpless, as one person, to change anything.
If you’re familiar with The Butterfly Effect, you may think it has to do with one small action growing in momentum to ultimately create a larger event. In actuality, The Butterfly Effect doesn’t describe a straight trajectory from one point to another but speaks to the chaos of cause and effect in nature. But we’ve made the concept more palatable for ourselves so as to explain away that which we don’t understand or ‘like’. We are looking for answers every day to make sense of our world. The more you know, the more you may realize that you do not know. And that is a hard pill to swallow for many of us. But that pill can’t be mitigated by sticking our heads in the sand (or our faces in a screen) and only being receptive to that which we identify with, are comfortable with, or ‘like’.
I wish I could tell you the answer to our smartphone overuse but I don’t know exactly what it is. I also know that I’m not going to find it in a google search on my iPhone. But I may find it watching a sunset (without taking a photo), in dialogue with a stranger I connect with as I move through my day looking at the people I see around me, or in a quiet moment, just sitting with myself. Smartphones aren’t all bad. But they aren’t the answer to our moments of loneliness or pain. A smartphone is a tool, and you must control the tool, so that it doesn’t control you.

Posts : 398
Join date : 2017-04-21
Amen, Gates, vermin that he is, sterilized Africans and others by the thousands, yet supposedly his kids remain unvaccinated.

Now the shit bag complains about cell phones. I doubt that his children use them.Can you say Hypocrisy?

OUT OF MIND » THE INSANITY OF REALITY » POISON PLANET » The Church of the Almighty Smart Phone is Making Us Really, Really Sad (And Maybe Even Kind of Stupid)

» Smart Phones – Stupid People
» French Court Rules Against Utility Smart Meters Because They Are Making People Sick
» For Those Who May Be Struggling with Smart Phone Addiction
» Using A Smart Phone Can Cause Structural Differences In Your Brain
» If you Listen to Music Through your Smart Phone, This Happens to Your Brain