OUT OF MIND » SUPER SCAMMERS!! RV & DINARIAN FRAUDS & THOSE THAT BUST THEM OUT! » NEIL the conman KEENAN » Jhaines Blog: Neil Keenan Points Readers to The Monaco Colloquium


The Monaco Colloquium – August 2011 – Neil directed me here, but says this is not exactly the way it all happened.

Posted on September 26, 2012
I think it’s close enough
though, or he would have been more specific. I believe one thing that
was different was that it was Neil himself who confronted Jay
Rockefeller and kept him off the boat in a not very subtle manner 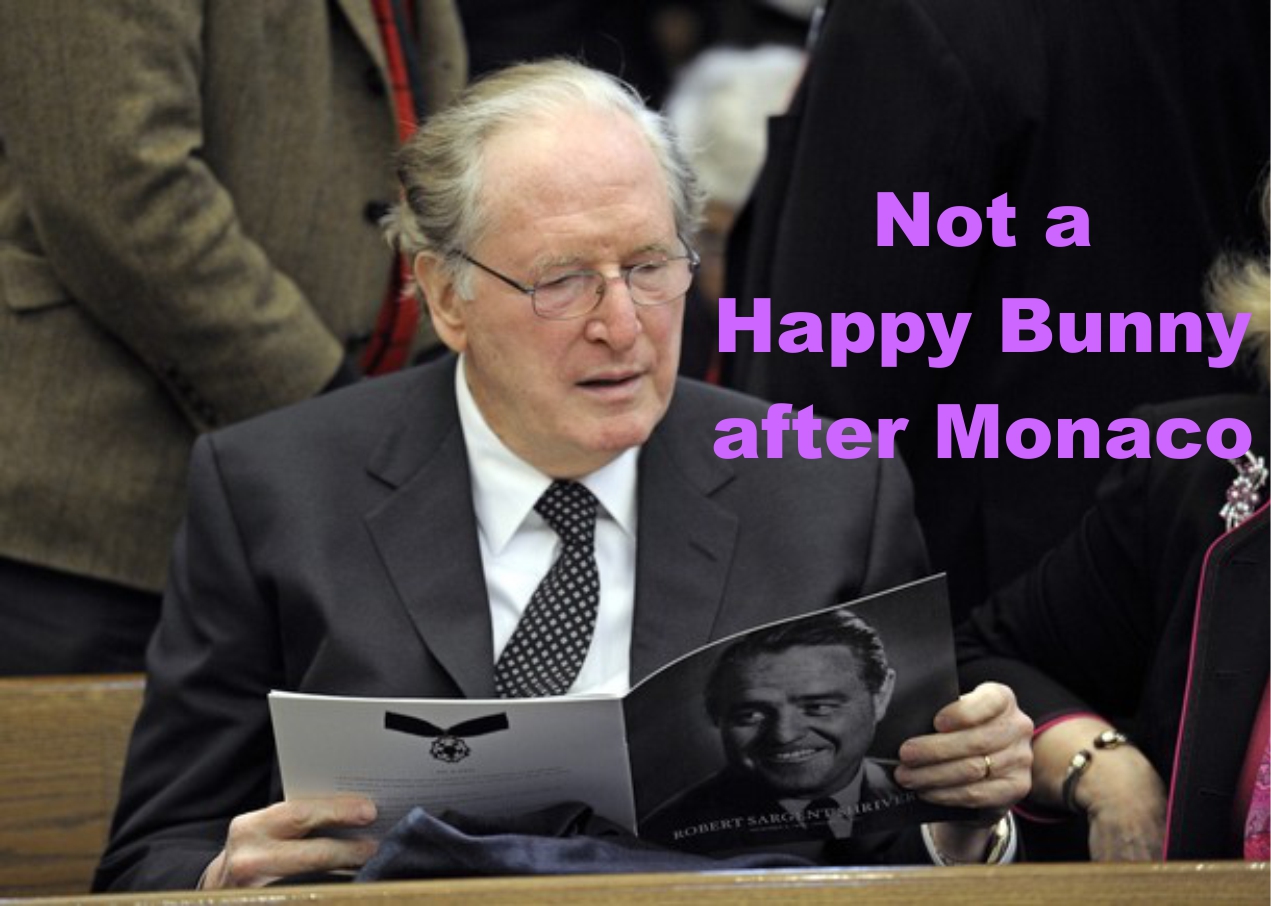 Picture: US Sen Jay Rockefeller. Not a happy bunny after The Monaco Colloquium.


Monaco
Colloquium – August 2011. The Great Game approaches its final shake of
the dice. Switzerland leads a fifty-seven nation geopolitical board
change. The current governments of the US, Canada, UK, Germany, France
and Italy are actively excluded from executive decisions concerning the
new global gold-backed financial system.


It was a step-change moment destined to be savoured by future
historians. For the period of a week towards the end of August 2011, a
secret meeting of fifty-seven finance ministers from across the globe
began the long-prepared-for task of setting up a new international
asset-backed financial system.


The gathering was a powerful invitation-only colloquium, hosted by Switzerland, which started on dry land in the Principality of Monaco & Monte-Carlo,
and then moved onto a major naval vessel in adjacent international
waters. In subsequent commentary, this conference has sometimes been
referred to as “The Meeting of 57“ and the outcome as “The Monaco Accords”.


Certain negative fiat-casino players were strenuously refused entry.
These included the recently deposed Japanese Prime Minister, Naoto Kan, the Managing Director of the IMF, Christine Lagarde, and all members of the US Nazi-continuum (the Rockefeller-Kissinger-Bush syndicate).


For Jay Rockefeller it was like being thrown out of his own funeral.
Having last year lost Europe to the Rothschilds, and more recently lost
Japan to the White Dragon Society, he was now physically and forcibly
removed from the Monaco Colloquium by agents acting for the US Pentagon
White Hats.


Initially resorting to patrician Illuminati bluster, Rockefeller
attempted to talk his way into the Monaco meeting. He was rebuffed. “Do
you know who I am?” he demanded. “Yes, I know who you are. You are
nobody,” said the host’s man at the door. “The Old World Order is out
and a New World Order is about to begin.” Rockefeller raged to no effect
and was informed that this was now a brave new world for the young; old
mummies like him were merely dust to be swept away.


Jay Rockefeller left the entrance, collected a security detail of
BlackOps goons, and returned in an attempt to force entry. The Monaco
Colloquium summoned its own security and, according to eye-witness
reports, Rockefeller and his cowboys were “literally thrown out.”


Shortly afterwards, the land-based part of the meeting was adjourned,
the attendees boarded a large naval vessel and continued their
conference in international waters off the coast. Two of Rockefeller’s
BlackOps helicopters buzzed the boat, intent, it is said, on activating
listening technology and usingelectromagnetic pulse weapons to
disrupt proceedings. If this is true as reported, the importance of the
meeting would be difficult to overestimate. Within moments of the
choppers’ appearance, US military aircraft, described as Harrier jump
jets, arrived and forced the helicopters away.


The opposition of two openly conflicting and powerful US interest
groups (Rockefeller syndicate vs Pentagon White Hats) raises an
important, if covert, operational issue. Which faction now controls the
clone-labs at Camp David (Maryland) and elsewhere? Whose finger can
switch off the sleeper cells? Which prominent clone-lines might be
terminated first? This is a large and emerging topic of current concern.
More about the use of human clones in American political management can
be found here.


Another important side-issue arising from the active participation of
several South American reformist governments at the Monaco Colloquium,
was the confiscation of the Nazi-continuum’s bank assets, BlackOps bases
and residential boltholes scattered all over the continent. These have
been multiplied and much-developed since the Nazi diaspora first
established itself in South America in the immediate aftermath of the
Second World War.


One of the facilities under immediate threat of confiscation is said
to be the Bush family hideaway in Paraguay. In the autumn of 2006, George Bush Snr purchased
a one hundred thousand acre ranching estate outside Paso de Patria, in
the Ñeembucú department of Paraguay. The property is strategically
located over the Guarani aquifer.
The Bush family first got to know about the ranch through their
CIA-linked drug-running activities in the area in the nineteen eighties
and nineties. Located near the border with Brazil and Bolivia, the
estate offers a range of covert entry and escape routes. Private
meetings and arrangements with Paraguay’s then-president,Nicanor Duarte, indicated that there would be no political difficulties with the Bush residence and its security.


However, by April 2008, the political situation in Paraguay was
beginning to volatilise after decades of dictatorial stability. The
Patriotic Front for Change coalition was on the move. Fernando Lugo,
a bearded, left-leaning, dissentient Roman Catholic ex-bishop won
Paraguay’s Presidential election on the 20th April 2008, decisively
upsetting the sixty-year human rights horror-rule of the right wing
Colorado Party. Lugo had been actively opposed by the Vatican,
ostensibly because of his enthusiasm for Liberation Theology and its
spiritual objective of subverting the Paraguayan élite status quo. He
was also a powerful and popular advocate of land reforms.


In Paraguay, less than two per cent of the population owns more than
ninety per cent of the land, and forty per cent of the population lives
in poverty. “We have 300,000 families without land and they have the
constitutional right to own the soil they live on,” Lugo insists. If the
Bush family had made private and personal arrangements with Nicanor
Duarte, it is thought unlikely that Fernando Lugo and his government,
emboldened by the revolutionary news out of Monaco, will continue to
honour them for much longer.


The introduction of a new pan-global asset-backed financial system to
replace the fiat-paper casino now visibly collapsing in the West has
been a long-anticipated reform. That it is now coming to political focus
at so many national levels outside the Western Cabal is only to be
expected. As the ever-increasing debt-pressures impact on food and
energy prices, and on employment opportunities worldwide, political
instability is becoming pandemic.


The Monaco Colloquium kickstarted the only financial solution which
can solve the problem. What was discussed there connects closely with Global Debt Forgiveness, with overcoming the Washington DC corporation’s blocking of the disbursement of the $47 trillion World Global Settlement Funds, with the implementation of the $10 trillion US Dollar Refunding Project, and with the return to an internationally-accepted Gold Standard.


At The Monaco Colloquium an understanding was created and formalised
by the co-hosts of that meeting, the Swiss Government. By the third week
of September 2011, a total of eighty-seven sovereign national
governments across the world had issued the Acknowledgement of
Memorandum of the Agreement, and had undertaken to formally sign the
document at the pre-agreed moment. Many more than this core eighty-seven
group of nations are expected to commit to, and enact, the Agreement.
The pan-global consensus which is emerging is still in its early stages
of realisation.


Late note: By the third week of December 2011, the number of
committed and subscribed nations had risen to 117. Another calculus (here)
suggests that the effective total is now 176 nations. This includes the
active support of the Maiona assembly of indigenous groups focussed in
New Zealand and linking 2700 tribal cultures across 59 countries in the
Oceania / Polynesia / South Pacific region. Several of these Oceanic
indigenous cultures maintain ancient connections with similar traditions
in Europe, Asia and the Americas.By the middle of July 2012, the
numbers of sovereign nations for and against the Monaco Accords and the
new gold-backed global financial system became clearer again. One
hundred and forty seven nations were reported (here)
to be in active support; less than twenty eight nations were against.
China, Russia, India, Brazil, South Africa and 142 other countries were
set-up to run the new asset-backed global financial system, and ditch
the Old West’s fiat-paper banking casino. Only the US, UK, Germany,
France, Italy and the G5′s shrinking group of slave states were holding
out against the benevolent reforms.


The Sabbatean Satanists, closely associated with the Rothschild
reptilian bloodline, originally emerged into view through the
machinations of Sabbatai Zanth (Sabbatai Zevi 1626–1676)
and his cabal in the seventeenth century. Zanth, a Jewish fake, was a
self-proclaimed Jewish messiah who, for reasons of personal and
operational expediency, converted to Islam while establishing his group
in Ottoman Turkey.


Among other things, the Monaco initiative will abolish the US Federal
Reserve Board, delegitimise and ban all fiat paper currencies from
international circulation and trading, and introduce several new
gold-backed international currencies, some with completely new names.

(2) An American Civil Action lawsuit (’11 CIV 8500 – Judge Holwell),
discussed at Monaco, was filed in the United States District Court for
the Southern District of New York on Wednesday 23rd November 2011. The
plaintiff is The Dragon Family (US agent Neil Keenan). The defendants
are various Illuminati Western Cabal minions including Daniele Dal
Bosco, Ray C.Dam, David Sale, Ban Ki-moon (UN), Silvio Berlusconi
(Italy) and Giancarlo Bruno (Davos WEF syndicate). The full text of the
summons can be found here or here (pdf
– 114 pages). The court papers can also be accessed through PACER: Case
1:11-cv-08500-JFK Document 1 Filed 11/23/11. PACER is a US government
restricted-access website. The acronym stands for Public Access to Court
Electronic Records. The Dragon Family is a reclusive group of wealthy
Asian dynasties committed to implementing the Monaco Accords.


A full transcript of this Benjamin Fulford video message can be read here.


Benjamin Fulford is a spokesman for the White Dragon Society.

The JP Morgan Blue Book. The Secret Book of Redemption.

Corporate evil, artificial intelligence and cyberform spirituality. What is going on inside our computer networks?

Dark Pool Gold. That which glisters returns to haunt the Fed.

OUT OF MIND » SUPER SCAMMERS!! RV & DINARIAN FRAUDS & THOSE THAT BUST THEM OUT! » NEIL the conman KEENAN » Jhaines Blog: Neil Keenan Points Readers to The Monaco Colloquium