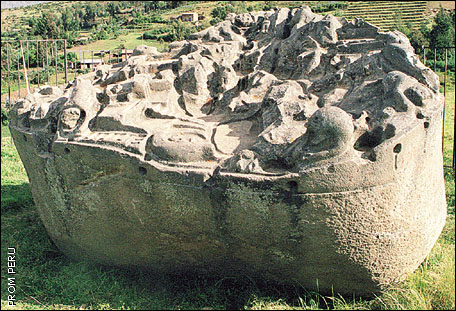 
Patreon: https://www.patreon.com/MysteryHistory Facebook: https://www.facebook.com/MysteryHisto... Twitter: https://twitter.com/Mysterytweetery Steemit: https://steemit.com/@mysteryhistory Homes, towns, religious structures, an entire living infrastructure of a once highly successful, highly capable people. Managing to expertly fuse their existence harmoniously with the surrounding environment, creating structures which left little, if any impact on the surrounding landscape, structures still useable even to this day… There are many incredible ruins to be found within Peru, located within Abancay, a province in the region of Apurímac, Sayhuite has been conveniently dated to the period of the Inca Empire, between the 15th and 16th centuries AD. However, like many sites dotted around Peru, and indeed the world, an explanation as to how these cultures achieved such wonders with such primitive access to construction or tools, is not forthcoming... Compared to other Incan sites, Sayhuite. is also a complete ruin, leading the more observant, and indeed the free thinking, self-funded geologist among us, to suspect that it may actually be even older than the pre Inca’s responsible for machu pichu ect… Yet the most noteworthy object, at Sayhuite, and the reason for our video is its Monolith. A mysterious boulder drenched in intricate, purposefully placed carvings... Interestingly, the word, ‘Sayhuite’ originated from the Quechua word ‘saywayta’, which translates as ‘place of orientation’. The site is located on the top of a terraced hill, dedicated research has also revealed that the site was once home to an enclosed sanctuary. Yet all that remains of this sanctuary today, is a few levelled platforms, and the Monolith. It contains more than 200 geometric and zoomorphic figures, including reptiles, frogs, felines, topographical hydraulic models, complete with terraces, ponds, rivers, tunnels, and irrigation channels. The functions or purposes of the stone are not academically known, yet others suspect it was a map of the once existing complex, created by a culture able of moving tremendous weights, and carving stone with relative ease. Researcher Dr. Arlan Andrews, Sr. believes the monolith was used as a scale model, to design, develop, test, and document the water flow for public water projects, and to teach ancient engineers and technicians the concepts and practices required. Quote, “The rock was edited several times with new material, either altering the paths of the water or adding routes altogether.” End quote. Clearly a remarkable artefact left by a remarkable civilisation… Thanks for watching guys, and until next time take care. https://en.wikipedia.org/wiki/Sayhuite http://www.ancient-origins.net/artifa...