Charlie Munger on the Dangers of Ideology and How to Form Intelligent Opinions Sat Mar 17, 2018 8:52 am

Admin
Posts : 108408
Join date : 2012-01-04
Location : Woodstock Nation
Charlie Munger on the Dangers of Ideology and How to Form Intelligent Opinions


Charlie Munger is one of the most brilliant living humans.
He’s the irreverent billionaire investing partner of Warren Buffett, one of the richest men in the world.
Though Buffett tends to get more recognition, Munger is an intellectual force of nature in his own right. 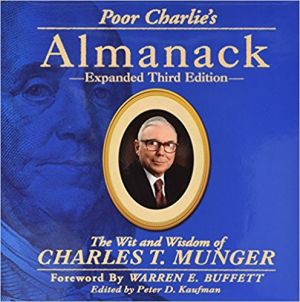 Over the years, he’s dispensed a massive amount of pragmatic wisdom on how to think clearly, form accurate opinions, and make good decisions.
In his lifetime he’s tested his methods in the arenas of business and investing, and his net worth of $1.7 billion testifies to the effectiveness of his approach.
Today I’m going to give you a taste of the katana-sharp mind of Charlie Munger, and if your interest is piqued, I’ll share a few more links for you to explore at the end of the post.
For now, let’s take a look at just a few passages from Munger, on the trap of intense ideology and the work required to have an opinion.

“Another thing I think should be avoided is extremely intense ideology, because it cabbages up one’s mind. You’ve seen that. You see a lot of it on TV, you know preachers for instance, they’ve all got different ideas about theology and a lot of them have minds that are made of cabbage.
But that can happen with political ideology. And if you’re young it’s easy to drift into loyalties and when you announce that you’re a loyal member and you start shouting the orthodox ideology out what you’re doing is pounding it in, pounding it in, and you’re gradually ruining your mind. So you want to be very careful with this ideology. It’s a big danger.
In my mind I have a little example I use whenever I think about ideology, and it’s these Scandinavian canoeists who succeeded in taming all the rapids of Scandinavia and they thought they would tackle the whirlpools in the Grand Rapids here in the United States. The death rate was 100%. A big whirlpool is not something you want to go into and I think the same is true about a really deep ideology.
I have what I call an iron prescription that helps me keep sane when I naturally drift toward preferring one ideology over another. And that is I say “I’m not entitled to have an opinion on this subject unless I can state the arguments against my position better than the people do who are supporting it. I think that only when I reach that stage am I qualified to speak.” Now you can say that’s too much of an iron discipline… it’s not too much of an iron discipline. It’s not even that hard to do.”

Echoing other luminous minds such as Terence McKenna, Jordan Peterson, and Robert Anton Wilson, Munger warns that it’s very dangerous to buy in wholesale on any ideology.
In essence, he’s saying that committing to any dogmatic system of ideas is the fastest way to ruin your ability to think. Once you believe you’ve found the Correct Answers, your mind is simply made up and precluded from exploring new ideas and alternative possibilities. As the Stoic sage Epictetus put it:

“For it is impossible for anyone to begin to learn that which he thinks he already knows.”

Munger suggests we ought to think of intense ideologies as akin to deathly whirlpools waiting to suck us in and kill our ability to think for ourselves.
He goes on to explain a simple method for forming intelligent opinions: don’t allow yourself to have an opinion on something, unless you can state the arguments against your position better than your opponents. Elsewhere he phrased the same idea in the followings ways:

“I never allow myself to have an opinion on anything that I don’t know the other side’s argument better than they do.”
— Charlie Munger
“The ability to destroy your ideas rapidly instead of slowly when the occasion is right is one of the most valuable things. You have to work hard on it. Ask yourself what are the arguments on the other side. It’s bad to have an opinion you’re proud of if you can’t state the arguments for the other side better than your opponents. This is a great mental discipline.”
— Charlie Munger

Munger is getting at something which, in the rationality community, is known as “steelmanning.” When you strawman an opponent’s argument, you warp it into a weaker version of itself, so that it’s easier to refute. With steelmanning, you do the opposite, deliberately strengthening your opponent’s arguments so you can be sure that your own position can actually stand up to scrutiny.

This is quite difficult to do, but if you practice it, you’ll be at a serious advantage in the game of life. You see, knowledge really is power. This is why so many successful, visionary people are known to be voracious readers. Charlie Munger once said:

“In my whole life, I have known no wise people (over a broad subject area) who didn’t read all the time – none, zero. You’d be amazed at how much Warren [Buffett] reads – and how much I read. My children laugh at me. They think I’m a book with a couple of legs sticking out.”

Reading a lot allows you to see the world more clearly than the next person. The people with the most accurate models of the world are able to make the wisest decisions, and perhaps more importantly, avoid making unwise decisions. As Warren Buffett once put it:

“You only have to do a very few things right in your life so long as you don’t do too many things wrong.”

In the few short paragraphs I shared above, Charlie Munger has in fact spelled out a recipe for operating more intelligently in the world than the vast majority of people. You may have noticed that most people have opinions about literally everything, and most of them can’t explain the reasoning and evidence that led them to their own conclusions, let alone recite the strongest arguments against their positions.
If you avoid intense ideology like the plague and employ Munger’s “iron discipline” for forming opinions, you’ll be leaps and bounds ahead of the herd—much more likely to build a worldview that actually reflects reality.
I believe this is an inherently worthwhile pursuit, but the icing on the cake is that as you improve the accuracy, breadth, and robustness of your model of the world, you’ll improve your decision-making. And perhaps more than anything else, our ability to make good decisions determines the quality of our lives. That is why learning is so precious.

If you’re interested to go deeper down the Charlie Munger rabbit hole (and you should be), I really can’t recommend enough the Munger Compendium over at the great blog, Farnam Street. Shane Parrish is a huge Munger fan and has compiled all of the best stuff that’s poured out of his far-seeing mind. In particular, check out these favorites of mine:

And if you want to go deeper still, legend has it that the holy grail of Munger wisdom is Poor Charlie’s Almanack: The Wit and Wisdom of Charles T. Munger, a 548-page opus by the man himself dispensing his most essential insights on how to live a good life and find success in whatever you do.