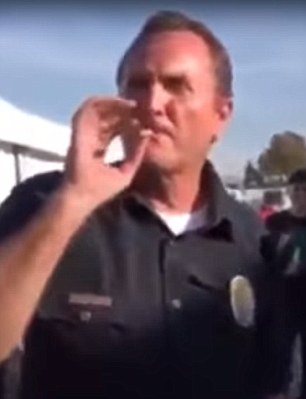 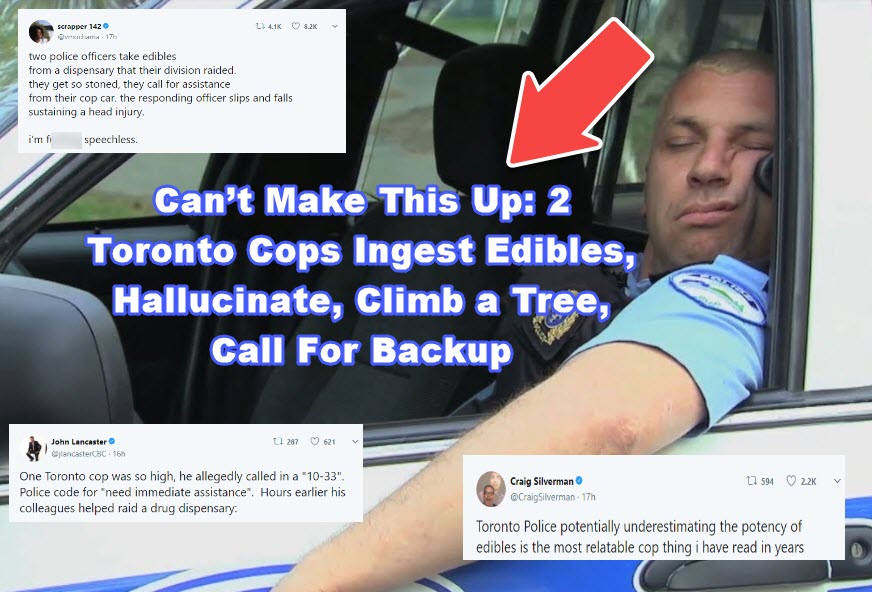 On Sunday, two officers from Toronto’s police department allegedly ingested cannabis edibles, then hallucinated and called for help from their cruiser.

It all started when Toronto cops raided the Community Cannabis Clinic over the weekend, a dispensary located at St. Clair Avenue West. Although news sources still can’t confirm if Const. Vittorio Dominelli and Const. Jamie Young of 13 Division engaged in the raid, it’s suspected that the edibles they consumed came from this dispensary. After they allegedly consumed the edibles, they apparently separated, then one of them called an off-duty colleague asking for help.

“He was up in a tree,” a police source said, according to the Toronto Sun. “Up there with the birds.” An EMS paramedic located him then helped him get down to give him some medical treatment.

Dominelli and his partner, are under investigation by the professional standards unit which is mandated to investigate misconduct as per the Ontario’s Police Services Act. Police sources told CBC News that both cops complained of “hallucinations”, which prompted one to make a phone call to another officer asking for assistance. Both were later taken to a hospital where they received treatment. However, no criminal charges have been filed against the two.

When emergency crews arrived to the scene, another Toronto police officer who was responding to the situation slipped on ice and needed medical attention, and ended up surviving a head injury.

“It’s so embarrassing,” says a veteran officer. “We are arresting kids and seizing profits and products from businesses and this is how some officers (allegedly) act.” Mark Pugash, Toronto police spokesman, said “All I am able to say is that two officers are being investigated by Professional Standards.” However, Toronto Police Association Mike McCormack said he understands both officers have been suspended. “I am getting calls about it and I know there’s interest, but it really is hard to comment and unfair to comment while there is an investigation underway,” McCormack says.

Stories of cops getting caught while imbibing some of that good (illegal) stuff continues to surface. In July 2016, two cops from Colorado were busted getting high on duty.

A short clip of the pair went viral, showing one cop in uniform sitting in a patrol car who passed a rolled cigarette to another cop, who clearly inhales the cigarette deeply.

The officer was heard saying, “Let me get a hit on that thing with you.” As he exhales, he says, “Some good shit.” Despite recreational cannabis being legalized in Colorado since 2014, public consumption of the drug is still illegal. For Colorado police, however, cannabis is treated like alcohol which means that it’s prohibited to consume it while on the job.

Cops Cashing In On Weed

If everyone else can see the benefits of cannabis legalization, why can’t cops? The problem is that in the world we live in, the rules of legalization are hazy at best and keep changing. If we can’t define a stable set of laws for citizens, how do we define the laws for cops – especially while cannabis is still a federally illegal substance?

The story of Patrick Moen, a former DEA agent and now a successful exec in the cannabis industry, is a good example. Moen was frustrated with the way DEA’s internal policies were arbitrary when it came to attitudes towards cannabis, and eventually he packed up and left. He’s now part of Privateer Holdings, which in 2016 acquired $7 million in a round of funding.

It’s expected that stories like these will continue coming out as more people defect from the “law” and join the high life.

Waiting for the youtube vid.....cat calls fire brigade to rescue cops from tree. Firecrew pictured getting praise from Mayor while cops have a saucer of milk

» Officer Caught On Dashcam: “Go Ahead. Call the Cops. They Can’t Un-Rape You.”
» UFO in North York, Toronto? What is this?!? #UFO #Toronto 2014.07.26
» 10 Medical Conditions That Cannabis Edibles Can Help With
» Famous 'Great Grandfather' Tree in Chile Could Be The Oldest Tree in The World
» Soul Tree Astrology: Which Tree Did Your Soul Fall From? The Answer Depends On Your Birth Date