OUT OF MIND » CONSPIRACY THEORIES & ENDURING MYSTERIES » HISTORIES MYSTERIES » The Mysteries And Legends Of Shiprock, The Sacred Peak Of The Navajo People

The Mysteries And Legends Of Shiprock, The Sacred Peak Of The Navajo People

The Mysteries And Legends Of Shiprock, The Sacred Peak Of The Navajo People Thu Mar 29, 2018 9:51 am

Admin
Posts : 107552
Join date : 2012-01-04
Location : Woodstock Nation
The Mysteries And Legends Of Shiprock, The Sacred Peak Of The Navajo People


Called Tsé Bitʼaʼí or “the rock with wings,” Navajo Legends tell how Shiprock was a piece of land that became a bird, carrying the ancestral people of the Navajo on its back. After being transported from another place, the Navajos lived on the monolith, “coming down only to plant their fields and get water.”
Located southwest of the city of Shiprock, New Mexico, the strange Shiprock ‘peak’ is protected territory of the Navajo Nation.
Located in the center of an area inhabited by the ancient Pueblo people, a prehistoric Native America Tribe often referred to as the Anasazi, Shiprock is referred to as rock with wings” or “winged rock” thanks to the legend of the great bird that brought the Navajo from the north to their present lands. 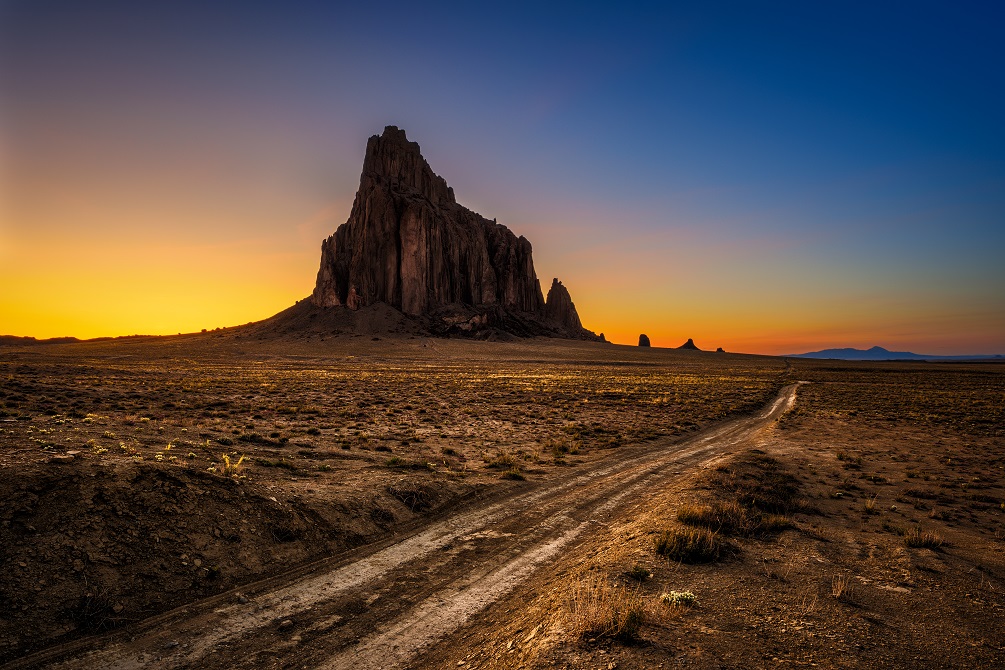 A view of Shiprock. Image Credit: Shutterstock.
It rises about 500 meters above the desert of New Mexico and has been the protagonist of a number of films and novels of the West.
Rising high above the surrounding dry landscape, Shiprock has long been a fascination not only to photographers and explorers but to anyone who travels to visit it.
Currently, it is the focus of attention of many photographers due to its beauty, but also thanks to the sheer sizes of stories and legends that sit on its back. 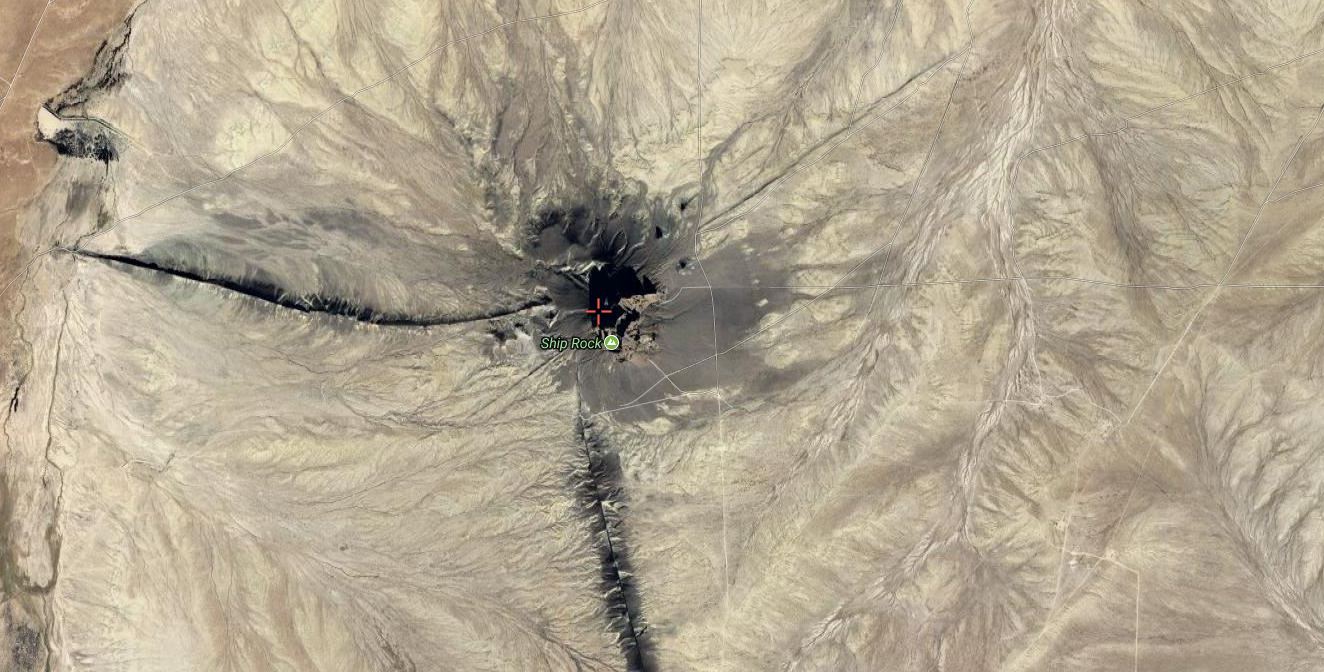 A Satellite image of Shiprock. Image Credit
This mysterious monadnock was formed some 27 million years ago, around 1,000 meters below the surface of the Earth. Shiprock is composed of fractured volcanic breccia and black dikes of igneous rock called Minette, and it is the erosional remnant of the throat of a volcano, and the volcanic breccia formed in a diatreme.
Over the years, the volcano eroded away, leaving behind a memory in the landscape, a strange geological formation with a height of around 460 meters, adorning the surrounding area with its mesmerizing beauty.
The name of Shiprock was given by colonists, because of the resemblance that this peak had to the enormous 19th-century clipper ship. Americans first called the summit “The Needle,” a name given to the topmost pinnacle by Captain J. F. McComb in 1860. 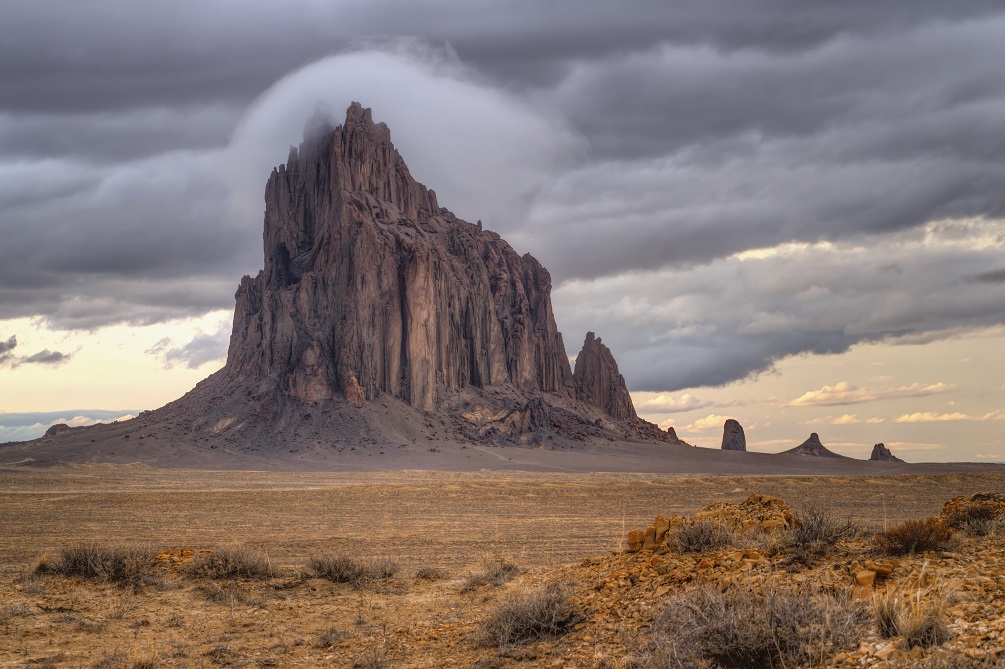 The Navajo name for the peak, Tsé Bitʼaʼí, “rock with wings” or “winged rock”, refers to the legend of the great bird that brought the Navajo from the north to their present lands. Image Credit: Shutterstock
Its Navajo name is Tsé Bit ‘A’í, which means “rock with wings.”
According to the Navajo legend, it represents the giant bird that carried the ancestral people of the Navajo on its back. Legends have it that at sundown, the massive ‘winged creature’ settled where Shiprock is today, promptly turning to stone.
Stories tell how the ancient Navajo settled on the rock’s peak, “coming down only to plant their fields and get water.”
One day, however, Shiprock was struck by a massive lightning storm causing great suffering and destruction, stranding the women and children on top to starve.
Since that time, the rock has been forbidden to people as the Navajo elders say, visitors may disturb the ghostly spirits of those left behind. According to Navajo tradition, the Shiprock formation is in the Four Corners region and plays a significant role in Navajo religion, myth, and culture.
Per Navajo customs, human ascents have been expressly off-limits since 1970.

Posts : 3722
Join date : 2017-02-15
I love how people who do not really understand Native people comment on things about Native people and try to make concepts of Native ways, stories and what they are really mean into something palatable for the masses.

However, I was living in Taos for a sort period in 2007, I had been there for 4 months. It was time to head north into Washington State for a rest, job and to make money for the summer, was extremely broke.

I traveled towards Ship Rock. Out of all the places I have ever been in the USA, Ship Rock is the most under estimated place. You can see this rock for miles as you approach it, everything is flat around it for miles and miles. Once you look, with your eyes, you cannot take your eyes off of it and it pulls you towards it. The hair stood up on the back of my neck the moment I saw it from far away.

When I saw it, I saw what it was, A space ship. I was not until I was right upon it did I notice the rock formation.

Native people know about ets, space ships and to this day have many encounters with the beings from other worlds.

Ship Rock is a spaceship and cloaked by a rock formation.

I have had many experiences in my life, but ship rock always stands out in my travels in the USA. It is like it does not belong there or anywhere feeling.

Our world is stranger than you could ever make up!

OUT OF MIND » CONSPIRACY THEORIES & ENDURING MYSTERIES » HISTORIES MYSTERIES » The Mysteries And Legends Of Shiprock, The Sacred Peak Of The Navajo People

» Sacred Peru 2017 - The Sacred Valley, Machu Picchu & Titicaca
» Skinwalker encounter on the Navajo Reservation
» Holding Sacred Space for the One People of Turkey, Please Share Freely…
» HOW CAN "WE, THE PEOPLE", OVER COME THESE EVIL ONES? GETTING BACK OUR HOLY GRAIL OF SACRED RELATIONSHIPS
» The 11:11 Phenomenon, Why More People Are Seeing These Numbers Sacred numerology and the meaning behind the numbers