Rights of the dead and the living clash when scientists extract DNA from human remains Sun Apr 08, 2018 8:39 am

Admin
Posts : 107558
Join date : 2012-01-04
Location : Woodstock Nation
Rights of the dead and the living clash when scientists extract DNA from human remains
April 6, 2018 6.45am EDT
Who gets to decide for the dead, such as this Egyptian mummy? AP Photo/Ric Feld

View all partners
Republish this article

Republish our articles for free, online or in print, under Creative Commons license.

The remains of a 6-inch long mummy from Chile are not those of a space alien, according to recently reported research. The tiny body with its strange features – a pointed head, elongated bones – had been the subject of fierce debate over whether a UFO might have left it behind. The scientists gained access to the body, which is now in a private collection, and their DNA testing proved the remains are those of a human fetus. The undeveloped girl suffered from a bone disease and was the child of an unknown local Atacama woman.
This study was supposed to end the mummy’s controversy. Instead, it ignited another one.

The mummified fetus from the Atacama region of Chile. Bhattacharya S et al. 2018, CC BY
Authorities in Chile have denounced the research. They believe a looter plundered the girl from her grave and illegally took her from the country. The Chilean Society of Biological Anthropology issued a damning statement. It asked, “Could you imagine the same study carried out using the corpse of someone’s miscarried baby in Europe or America?”
As an archaeologist, I share in the excitement around how technology and techniques to study DNA are leaping ahead. As never before, the mysteries of our bodies and histories are finding exciting answers – from the revelation that humans interbred with Neanderthals, to how Britain was populated, to the enigma of a decapitated Egyptian mummy.
But, I have also closely studied the history of collecting human remains for science. I am gravely concerned that the current “bone rush” to make new genetic discoveries has set off an ethical crisis.

We have seen a rush for human remains before. More than a century ago, anthropologists were eager to assemble collections of skeletons. They were building a science of humanity and needed samples of skulls and bones to determine evolutionary history and define the characteristics of human races. 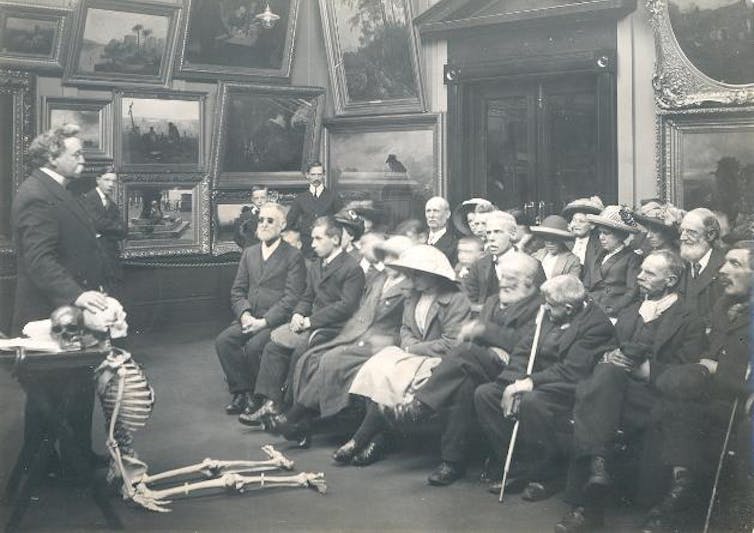 Museums were mad for skeletons around the turn of the 20th century. Tyne & Wear Archives & Museums, CC BY
Researchers emptied cemeteries and excavated ancient tombs. They took skulls from massacre sites. “It is most unpleasant work to steal bones from a grave,” the father of anthropology, Franz Boas, once grumbled, “but what is the use, someone has to do it.”
The case of Qisuk, an Inuit man, provides an especially egregious example. In 1897, the explorer Robert Peary brought Qisuk and five others to New York from Greenland, so anthropologists could more easily study their culture. Four of them, including Qisuk, soon died of tuberculosis.
Anthropologists and doctors conspired to fake Qisuk’s burial to trick his surviving 8-year-old son, then dissected the body and defleshed the bones. Qisuk’s skeleton was mounted and hung at the American Museum of Natural History. (It is still disputed today whether Qisuk was only stored at the museum or put on public display.)
By the end of the 20th century, U.S. museums held the remains of some 200,000 Native American skeletons.
These skeletons helped write the American continent’s history and foster an appreciation for Native cultures. Yet the insights gleaned from these gathered remains came at a steep price: Native Americans’ religious freedoms and human rights were systematically violated. Many Native Americans believe their ancestors’ spirits have been left to wander. Others insist that all ancestors should be afforded honor and their graves should be protected.
Today, a U.S. federal law provides for the return of stolen skeletons. Still, the legacy of these collections will haunt us for generations. Many Native Americans are profoundly distrustful of archaeologists. And even after nearly 30 years of active repatriation of human remains, there are still more than 100,000 skeletons in U.S. museums. By my estimation, it will take 238 years to return these remains at this rate – if they are ever even returned at all. 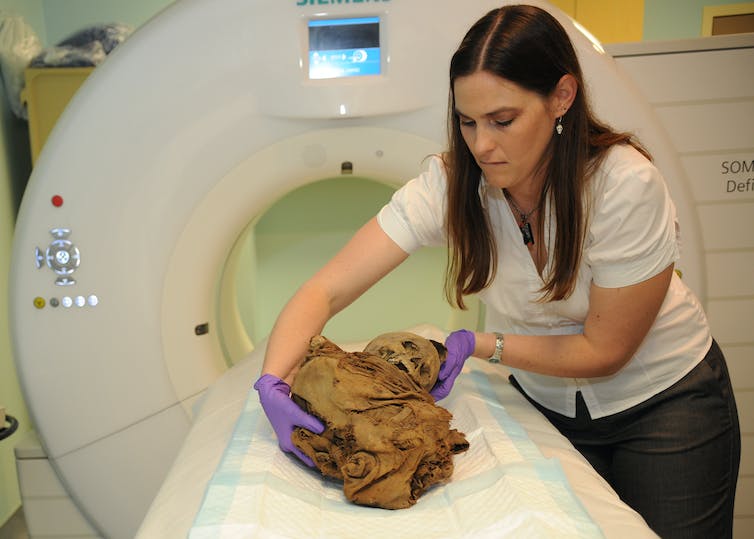 Even nondestructive research methods – like the CT scan about to be performed on this 550-year-old Peruvian child mummy – raise ethical questions. U.S. Navy/Samantha A. Lewis, CC BY

For too long scientists failed to ask basic ethical questions: Who should control collections of human remains? What are the positive and negative consequences of studies based on skeletons? And how can scientists work to enhance, rather than undermine, the rights of the people they study?
One place to look for answers is the Belmont Report. Published in 1979, this was the scientific community’s response to the Tuskegee Study. Over the course of 40 years, the U.S. government denied medical treatment to more than 400 black men infected with syphilis, to watch the disease’s evolution. In the aftermath of the resulting scandal, the Belmont Report insisted that biomedical researchers must have respect for people, try to do good as well as avoid harm, and fairly distribute the burdens and benefits of research.
Although these guidelines were intended for living subjects, they provide a framework to consider research on the dead. After all, research on the dead ultimately affects the living. One way to ensure these protections is to seek informed consent from individuals, kin, communities or legal authorities before conducting studies.
In some cases consultation may be unwarranted. A skeleton of our earliest human ancestor, at 300,000 years old, is a patrimony which all of us could claim. However, a fetus with birth defects that is 40 years old – even one sensationalized as a space alien – likely has kin and community that should be considered. Between these two extremes lies DNA research’s future of ethical engagement.

In its defense, the journal Genome Research, which published the analysis of the Chilean mummy, stated that the “specimen” – the girl – did not require special ethical consideration. She does not legally qualify as a “human subject” because she is not living. So disregarding the rights of descendants, the editors only concluded that the controversy “highlights the evolving nature of this field of research, and has prompted our commitment to initiate community discussions.”
To be sure, such discussions are desperately needed. In the same week that the mummy story hit the news, The New York Times published a profile of Harvard geneticist David Reich. The article celebrates how the jump forward in DNA research has led to sudden, luminous advances in our understanding of humanity’s evolution and history. Reich said his dream is “to find ancient DNA from every culture known to archaeology everywhere in the world.”
It is a beautiful aspiration. But both scientists and society now know to ask: Where will this DNA come from? Who will give their consent?

» The Globalization of Human Rights Violations: “The Right to Live a Dignified and Decent Living”
» 5,000-Year-Old Human Remains Found at the Ness of Brodgar
» 74 NASA Scientists Dead: Largest Cover-up in Human History Continues
» Ireland - Archaeologists Discover Remains of New Human Species
» Washington Is About to Decide Whether Human Remains Should Become Compost