Wonders Of Ancient Engineering: The Majestic Rock-Cut Tombs Of The Achaemenid Kings

Wonders Of Ancient Engineering: The Majestic Rock-Cut Tombs Of The Achaemenid Kings Mon Apr 09, 2018 10:14 am


12 kilometers northwest of Persepolis, in the Fars Province in Iran, lie the magnificent ancient ruins of the Naqsh-e Rustam necropolis.
The ancient Necropolis is home to four tombs of the Achaemenid kings, carved on the perpendicular cliffs of the mountain. The tombs are sometimes known as the Persian crosses, after the shape of the facades of the tombs.
The Necropolis is home four rock-cut monuments which stand out for their size, with a cruciform aspect and with great reliefs carved in their superior and inferior parts, all excavated following a model of the Egyptian Hypogeums.
Of the four, the oldest one bares inscriptions, thanks to which scholars have been able to find it is the tomb of Darius I, the third king of the Achaemenid dynasty, who ruled the empire between 521 and 486 BC., and who was defeated by the Athenians and their allies at the Battle of Marathon in 490 BC.

Panoramic view of the ancient Naqsh-e Rustam necropolis located about 12 km northwest of Persepolis, in Fars Province, Iran. The site includes rock reliefs of Achaemenid and Sassanid periods, four tombs of Achaemenid kings and a Cube of Zoroaster (far left). The reliefs are the oldest elements (the oldest one from 1000 BC) of Elamite origin. The tombs were carved out of the rock and belong (left to right) to Darius II (c. 423-404 BC), Artaxerxes I (c. 465-424 BC), Darius I (c. 522-486 BC) and Xerxes I (c. 486-465 BC). The Cube of Zoroaster belongs to the Achaemenid era (5th century BC), and its purpose is still unclear. Image Credit: Wikimedia Commons.
One of the fragments of the inscription says:
“Adam darayavaush khshaya-thiya vazraka khshayathiya/khshayathi-yanam… parsa parsahya puthra ariya ariyachithra.”
“I, Darius, the great king, the king of kings… a Parsi, the son of a Parsi, an Aryan of Aryan family.” (source)
However, the remaining three tombs are as majestic as that of King Darius.

All four thumbs are similar in form and appearance, but since none presents inscriptions archaeologists can only speculate on who they may have been built for.
The most accepted hypothesis is that the remaining three tombs belonged to Xerxes I (the son of Darius), Artaxerxes I and Darius II.
The entrance to each of the tombs is located at high altitude right in the center of the cross.
Inside, a chamber houses the sarcophagus with the remains of the king.
The ancient necropolis features a fifth tomb, of the same typology that remains unfinished, and that may have been built for Artaxerxes III or Darius III, the last of the Achaemenids, defeated by Alexander the Great in the battle of Gaugamela in 331 BC: and murdered days later by his satraps. 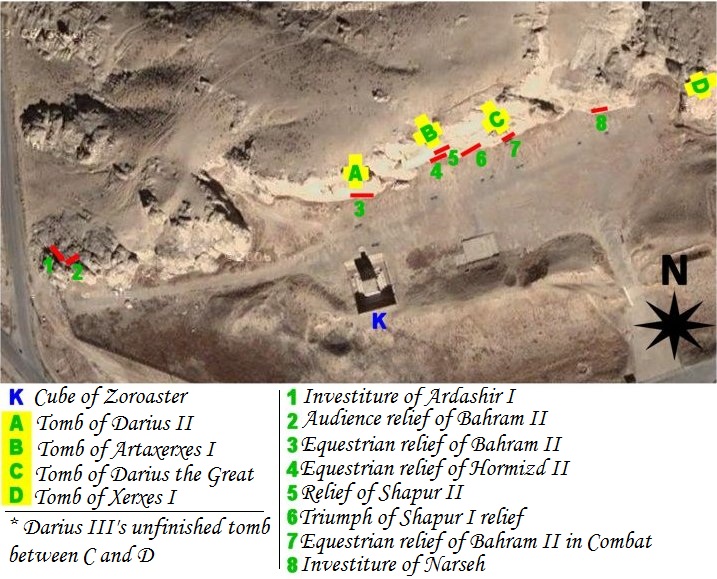 Map of the archaeological site of Naqsh-e Rustam. Image Credit: Wikimedia Commons.
According to scholars, the majestic reliefs that adorn the exterior of the tombs were made in later times by the Sassanids during the Second Persian Empire (226-651 AD), and represent outstanding war scenes of different sovereigns such as Narsés, Sapor I, Ormuz II, Bahram II and Ardashir I.
But the tombs carved out of the mountain, and the majestic reliefs aren’t the only magical details of the necropolis.

The facades of the tombs also have amazing architectural decorations on the columns that form a kind of portico similar to those of Persepolis itself.
Archaeologists believe that the entrances had to be closed after each burial, these being destroyed and the interior looted in later times following Alexander.
The tombs include other architectural elements.
The Ka’ba-ye Zartosht—the “Cube of Zoroaster” 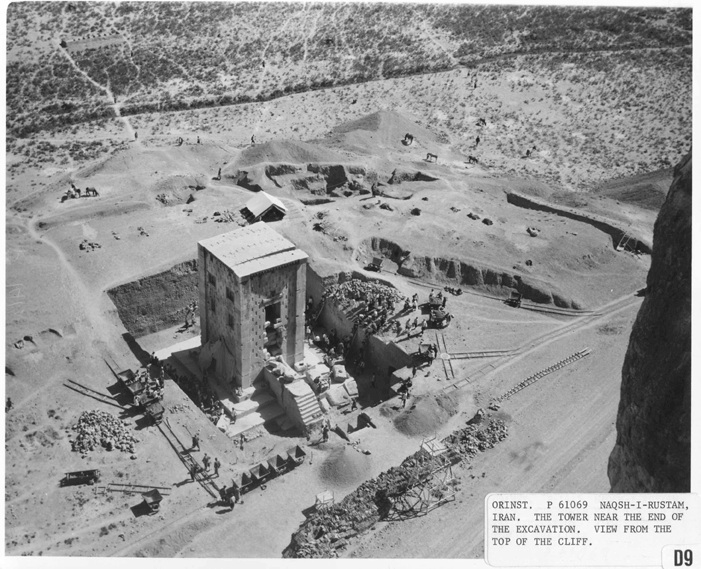 Ka’ba-ye Zartosht from above Mount Hossein. Image Credit: Wikimedia Commons.
Located around forty-five meters from rock-cut tombs we find the Cube of Zoroaster (Ka’ba-ye Zartosht), a small construction erected during the 5th century BC., built in the form of a tower 14 meters high that may have had a ritual function, or keeping the flame of eternal fire burning.
Some Iranian scholars believe that it served as a storehouse for religious books and royal documents.

This structure features on three sides trilingual inscriptions in Persian Sassanian, Parthian, and Greek, which constitute the most important historical document of the Sassanid era.
The ancient Necropolis of Naqsh-e Rustam was excavated for several seasons between 1936 and 1939 by a team from the Oriental Institute of the University of Chicago, led by Erich Schmidt.
Featured image credit: Wikimedia Commons