While many of us are fascinated with Pyramids scattered across the globe and massive stones such as those found at Puma Punku or Baalbek, the truth is that there are many other ancient wonders around the globe worth knowing about.
If we travel to the Swedish Island of Gotland, we will come across a fascinating ancient historical treasure.
The island of Gotland is home to the largest concentration of grooved stones in all of Europe, artifacts that are more interesting than they seem. The island of Gotland is the largest island of the Baltic Sea and is located off the east coast of Sweden and the north coast of Poland. 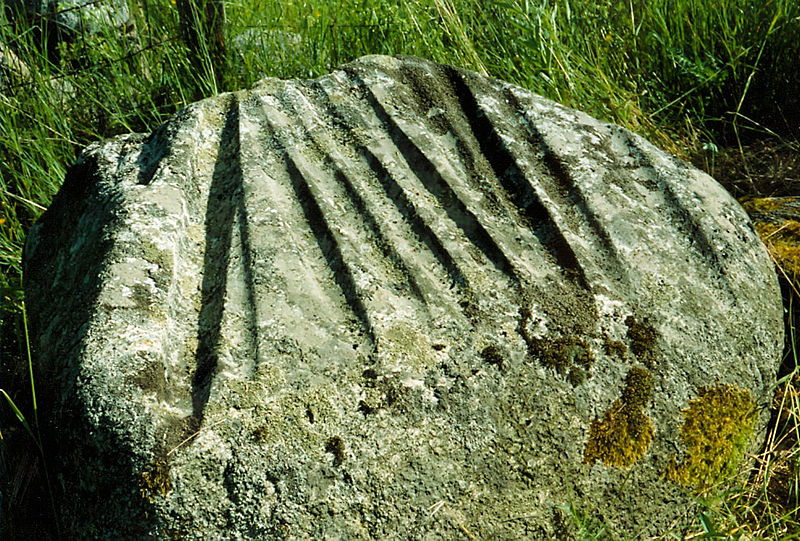 Grooves from Ronehamn, Gotland, Sweden. Image Credit: Wikimedia Commons.
The island is a limestone plateau, without mountains, inhabited since ancient times and famous for its abundance of sheep.
In those outcrops of limestone, and in the rocks and stones scattered throughout the island, there are some grooves (which in Swedish are called sliprännor) made thousands of years ago by ancient mankind.
So far, experts have documented more than 3,600 grooved stones, of which about 700 are scored directly into the limestone bedrock, the rest are found on about 800 stones.
As noted by Space Math / NASA, the length of the grooves varies from about 0.5 up to one meter.
They are between 5 cm to 10 cm wide and 1 cm to 10 cm in depth. The grooves on a stone are not parallel. Instead, they are oriented in several directions, some grooves crossing other grooves. Yet on any particular stone, the grooves are not randomly oriented but seem to follow a prescribed orientation, although that orientation may change slightly from grove to grove. 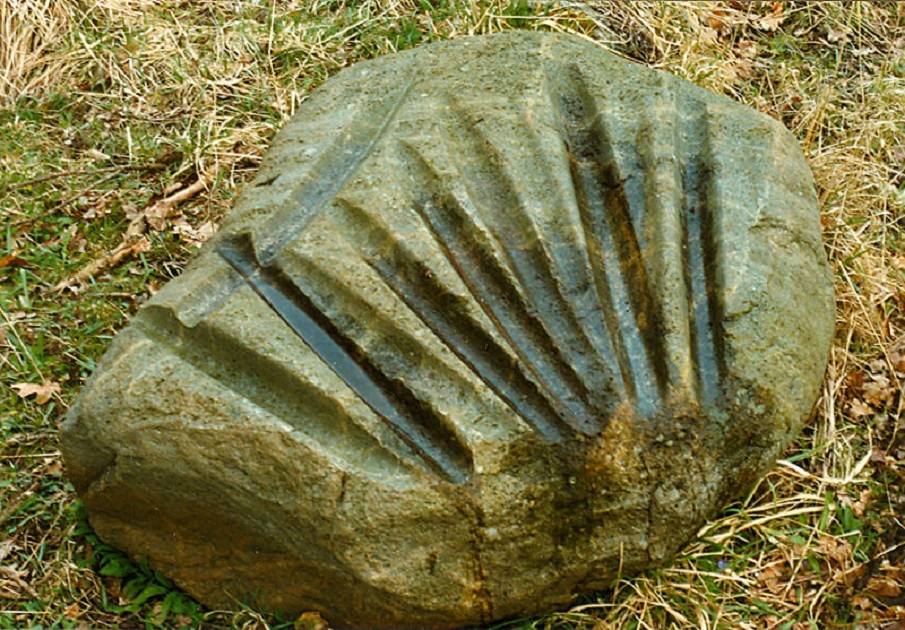 Grooves from Hörsne, Gotland, Sweden. Image Credit: Wikimedia Commons.
The grooves on the stones became a topic of interested for experts in the 1850s when researchers started comparing them with similar ones existing in France, where they are called polissoirs and date from the Neolithic era, created by the same culture that erected the menhirs and dolmens.
The difference is that in Gotland we find the highest concentration of grooved stones in the world, with the whole island practically covered with them.
The most important question: why?
By 1933, more than 500 sites had been documented with these grooved stones on the island.
At first, it was thought that they could have been made to sharpen Neolithic axes or swords during the Middle Ages.

However, it was soon evident that the width of the medieval or Viking swords was greater than the grooves themselves to fit into them.
And as for the Neolithic weapons, none could be found in the excavations made so far.
So, what were they? And why did the ancients create them? 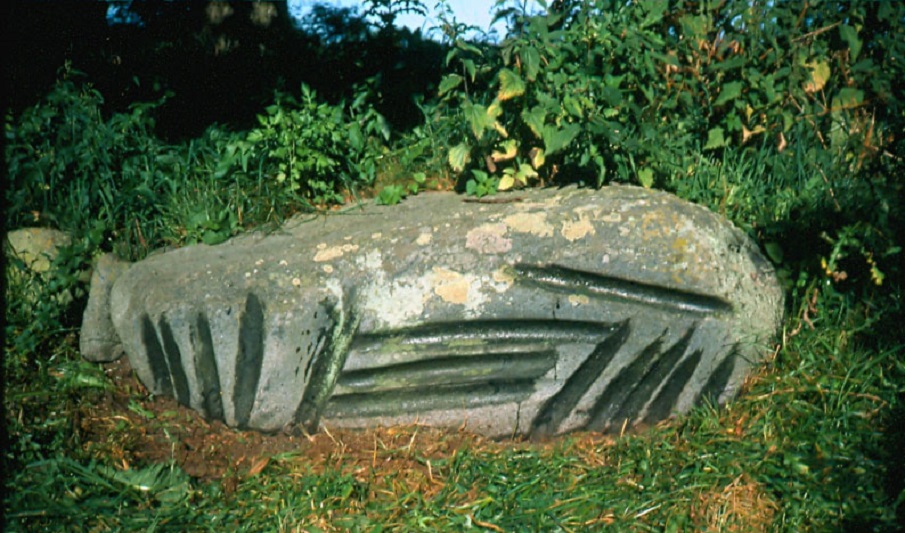 As mentioned in the above article by NASA Space Math, the stretch marks or grooves are between 50 centimeters and 1 meter long, depending on the location, about 10 centimeters deep and another 10 centimeters wide.
From the curvature of the grooves it seems that they had to be made with some abrasive object, according to some a pendulum, using quartz sand and water.
So, if they were not made by sharpening tools or weapons, what was their purpose?
As explained by NASA, is that the mysterious stones are in fact astronomical calendars. 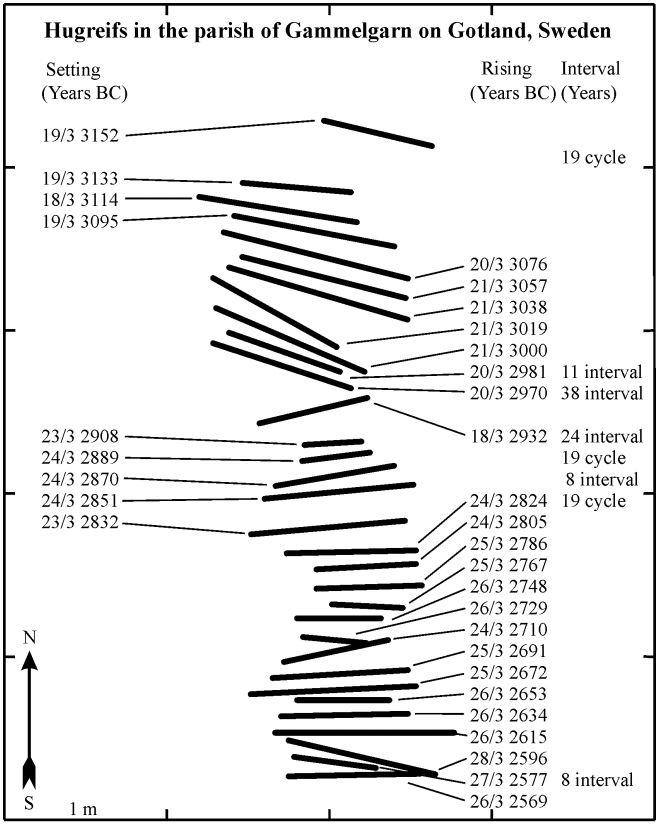 This is the longest known series of grooves on Gotland (Sweden). It is situated on the farm Hugreifs, about 600 m south-east of the church at Gammelgarn. The 32 grooves mark the direction to the rising or setting full moon on the date of its passage of the bright star Antares in Scorpio. The dates are in the Gregorian calendar. (Measurements by S. Gannholm.) Image Credit.
This is based on the curious alignment of the grooves, which always appear in groups and point in different directions, even overlapping at times.
Sören Gannholm, who studied the enigmatic stones in the early 1980s, found that many of the grooves point in the direction of the start or end of the full moon on different dates with an interval of 19 years.

A computer simulation taking into account the azimuth found a correspondence of the orientations for the period 3300-2000 BC, which may confirm their Neolithic origin.
Recent research of 1256 grooves revealed that they are arranged with certain positions of the celestial bodies, possibly the sun or the moon. Most of them are oriented east to west, although the island is itself oriented north-south.
Certain late 1st-millennium picture stones on Gotland display grooves that have been produced after the relief of the stones was formed, which show the grooves to be late. Furthermore, with the level above current sea surface of the lowest grooved outcrops on the island, that shows them to be no older than AD 1000 judging from post-glacial shoreline displacement.
It has been suggested that on one picture stone, part of the Late Iron Age decoration is carved into the bottom of a groove, suggesting that this groove must be older than the picture.
Source: NASA / Space Math
Featured image credit: Wikimedia Commons.