One of my all-time favorite books is without a doubt Journey to the Center of the Earth, written by world-famous Author Jules Verne.
The story written by Verne involves a German professor called Otto Lidenbrock who was convinced that there are volcanic tubes that lead toward the center of our planet.
Lidenbrock, his nephew Axel, and their guide Hans descend into the Icelandic volcano Snæfellsjökull and encounter many adventures along the way, including prehistoric animals and dangers. Eventually, they resurface in southern Italy, at the Stromboli volcano.
In the book, Verne describes a MASSIVE ocean that exists inside our planet.
He explains how: a vast expanse of water, the beginning of a lake or an ocean, extended beyond the limits of sight.
Further, the view followed its mass outlined on the misty background of the horizon. It was a true ocean, capriciously contoured by the terrestrial shores, but deserted and with a terribly wild aspect.
The book was a science fiction bestseller, and despite many people believing that something like this may be possible, the idea remained firmly a science fictional idea.
Now, what if what was once thought to be a mere fantasy of the writer, was, in fact, closer to reality? 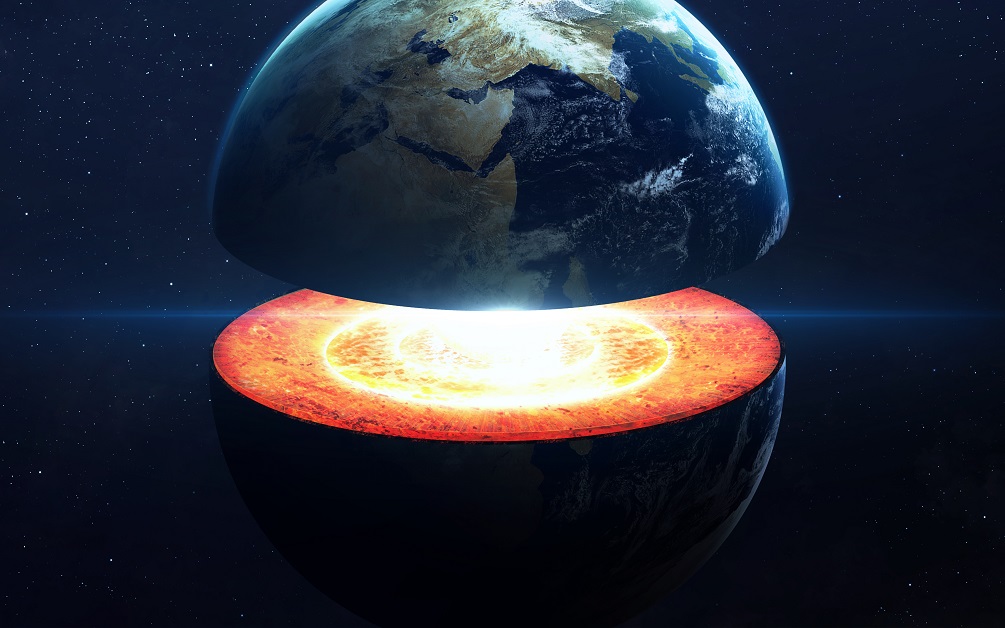 Image Credit: Shutterstock.
Is it even possible that there really is an underground ocean beneath or feet?
An article published in the journal Nature points in that direction.
As it turns out, scientists discovered a while ago, a diamond-rich in water with traces of a mineral called ringwoodite (in honor of its discoverer, the geochemist Alfred Ringwood).
The diamond originally came from an area that separates the upper terrestrial mantle from the lower one, that is, between four and six hundred kilometers beneath our feet.
So, what does that has to do with Verne, Inner Earth, and an ocean beneath our feet?
The fact is that the diamond found was associated with water molecules in a significant proportion (1.5%), which leads experts to propose the theory that this zone of transition of the mantle is very rich in water.
In fact, scientists have proposed that there is so much water beneath the surface of our planet, that we can cover the surface of our planet entirely in water. The existence of this ‘underground ocean’ would explain the great volcanic and tectonic dynamism of the planet.

Graham Pearson, a researcher from the University of Alberta (Canada) says that the ringwoodite found “provides confirmation that there really are pockets of water in the depths of the Earth.”
That, however, is a theoretical confirmation, of course, since due to lack of equipment and technology it would be impossible to obtain physical evidence from the mantle directly.
That kinda’ sucks since, despite the fact that humans have made it to space, landed on the moon and explored distant alien worlds, we’ve still not explored what exactly lies beneath our ocean, and what mysteries may be hidden beneath the surface of our planet.
Alfred Ringwood proposed that the mineral that bears his name could be found in the transition zone of the mantle, originated by the high pressures and temperatures that are found beneath deep beneath the surface.
But if we can’t go down there, how did scientists find the diamond?
Experts believe that the diamond surfaced in a volcanic eruption in a kimberlite wash (an igneous rock formed from magma and that is the deepest).
It was only three millimeters wide and lacked commercial value, but it was sold to scientists who were looking for other types of rocks, and who came up with something that was priceless: inside the diamond, there was a microscopic trail of ringwoodite.

But not everyone is convinced that a massive underground ocean exists and not all scientists believe that the result of the diamond analysis should be extrapolated to the theory of a massive underwater ocean based on such a small sample of ringwoodite.
Moreover, some scientists even admit that even if there is an ocean beneath our feet, it would not be in liquid form but under a molecular variant called hydroxyl, with only one atom of oxygen and another of hydrogen instead of the two.
David Wilcock and Earth’s Inner Civilizations
In 2015, an article appeared on Coast To Coast AM, where author and researcher David Wilcock discusses Earth’s Inner Civilizations.
Wilcock told C2C that an alliance of ancient civilizations currently resides inside the Earth, and they may soon reveal themselves to the ‘outer’ world.
During the formation of all watery planets in the universe, he explained, hollow cavities form below the surface of the crust and have their own biome that features bacteria which gives off natural light.
“What this means is that you can actually live inside caverns in the Earth that have visible light,” he marveled.

Based on his research, Wilcock said, “it appears that these cavities are used so that more advanced civilizations have a place they can live while they’re managing what takes place on the surface.”
Over the span of the planet’s history, he explained, various advanced societies, such as the Atlanteans, took refuge underground in order to survive tumultuous times and ultimately settled in their new subterranean location.
While the presence of these civilizations has been a part of UFO lore for decades, he contended that the government has direct knowledge of their presence due to accidentally discovering them via clandestine projects aimed at building secret underground bases.
“They’ll have these tunnel boring machines and sometimes they break through into someplace they’re not supposed to go,” Wilcock claimed, “and there’s already people there.”
For the full interview with David Wilcock click here.
Featured image by Leon Tukker. Image Posted with permission.