A village in New Brunswick has been shaken by at least 14 earthquakes over the past 17 days — and nobody knows what’s causing them. This is not the first time the community has trembled like this. Towards the beginning of 2016, McAdam experienced more than 100 small earthquakes, which shook homes and broke windows. Like the most recent swarm of tremors, no scientific explanation was ever found. 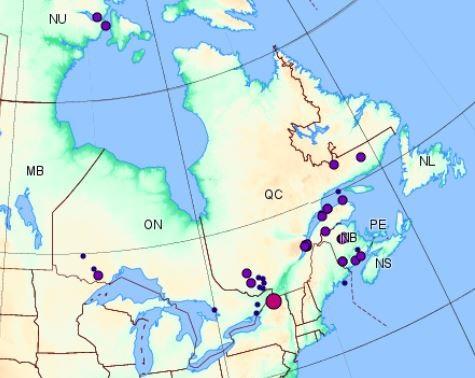 Mysterious earthquake swarm rattles inhabitants of McAdam in New Brunswick and nobody knows where the quakes come from.
“Sometimes, I just think it’s a truck going by. It doesn’t bother me too much, but the wife gets kind of upset, paranoid. She’d crawl under the bed if she could!”
According to data from Natural Resources Canada, there have been 23 earthquakes in the province over the past 30 days. That includes 14 in the vicinity of McAdam between March 27 and April 3 that have ranged in magnitude from 0.2 to 2.6. More than half of the earthquakes, he added, have occurred in the middle of the night at the relatively shallow depth of 600 metres.
“We’ve had about three, I think, that came in around 2.6 — so those ones you feel and you hear. So you’d be sleeping in bed and all of a sudden, you’d hear this bang… And you’d sit right up and say, ‘There’s another one,’ and then you’d hear another little bang, bang as they kind of went away.”
These earthquakes are very close to the surface… And that’s why people hear them besides feeling them.


Nobody knows what is going on

McAdam sits near the province’s western edge, close to its border with Maine. There are no well-defined fault lines in the area, which makes the earthquakes all the more puzzling to researchers.
“In terms of what is exactly triggering them, this is not understood still,” University of New Brunswick geology and engineering professor Karl Butler told CTV Atlantic.
A seismograph does operate from McAdam, sending tremor information on to scientists in Ottawa. Better equipment, Butler suggested, could help solve the mystery.
“In McAdam, we do have a permanent station there, but not a small array like we did previously,” Butler said. “So they can’t locate the events as accurately.” Seismologist Stephen Halchuk says it’s not known why the earthquakes are happening in the McAdam area. via CBC.ca
“So far, no government and no research organization has seen fit to fund such an intensive research effort,” he said
Natural Resources Canada seismologist Stephen Halchuk does not see any cause for alarm. Small earthquakes are not uncommon in southwestern N.B. and there is no indication that there has been an increasing long-term trend.
“This low level of activity with the small, magnitude two and smaller events is really not out of the ordinary,” Halchuk explained.
Despite the ongoing mystery, the quakes are no longer rattling inhabitants of McAdam. Is there a small fault lying under the village? Are they building something underground? There is something strange happening down there! Always be prepared!