OUT OF MIND » CONSPIRACY THEORIES & ENDURING MYSTERIES » HISTORIES MYSTERIES » The Earth Grid: Are Ancient Monuments The Result Of A Global Consciousness?

The Earth Grid: Are Ancient Monuments The Result Of A Global Consciousness?

The Earth Grid: Are Ancient Monuments The Result Of A Global Consciousness? Thu Apr 19, 2018 9:13 am


In addition to the fact that Earth is so far the only planet capable of hosting life as we know it, many other mysteries engulf our home world.
Throughout millennia, ancient civilizations around the globe left their mark on history. Building supermassive structures that defy explanation, our ancestors made sure to remain ever-present in history books.
Today, we admire and research awestriking monuments built thousands of years ago, trying to answer some of the most important historical questions: How did civilization develop, how they managed to transport massive stones weighing up to one hundred tons, and why so many monuments are similar in design?
What if there was a higher purpose to these ancient structures?
But perhaps the most critical question we have failed to address is: Is it possible that ancient monuments were built with a higher purpose? And what if, these striking structures were constructed not randomly, but were strategically positioned around the globe?

Have you ever noticed that some ancient monuments appear to be connected? If you take a look at the world map and look at the position of ancient monuments, you’ll notice that some of them can easily be connected with straight lines, almost as if the ancient builders used advanced forms of geometry, and mathematical equations carved into stone, making already mind-boggling monuments ever more mysterious.
Many authors have asked, and failed to answer why the Pyramids of Egypt were built?
Furthermore, we have failed to answer how the Ancient Egyptians how these massive monuments were erected, and we have not managed to understand how the ancient Egyptians managed to place the Great Pyramid of Giza at the exact center of all land mass on Earth.
Did you know that the east/west parallel that crosses the most land and the north/south meridian that crosses the most land intersect in two places on the earth, one in the ocean and the other at the Great Pyramid?
Don’t you wonder how this was possible without the ability to fly?
How did the ancients manage this without the ability to know how the world’s landmass looked like at that time?

The Pyramids, specifically those found at Giza, are an amazing achievement of several sciences together: geometry, physics, and mathematics, all combined to form monuments that have stood the test of time.
For example, the weight of the Great Pyramid of Giza is estimated at 5,955,000 tons.
Multiplied by 10^8 gives a reasonable estimate of the earth’s mass.
If we were to recreate the Great Pyramid of Giza today, we would have difficulties doing so, despite our knowledge and machinery.
This fact alone makes the Pyramids of Giza a true ancient marvel.
We don’t want to take away credit to the ancient man who built incredible structures like the Pyramids, but did they really manage this with sticks and stones? Or did they, as some authors suggest, possess far more advanced technology than we are willing to accept?
I can’t help to wonder if there is a slight chance that somehow, ancient cultures all over the world were connected, either through a global consciousness, or another global phenomenon that helped point them in a single direction, which resulted in the construction of countless ancient sites that look alike as if it was a construction process on a global scale.
Almost as if every single culture on our planet felt the need to place monuments such as the pyramids, the Stonehenge, Teotihuacan and other incredible places in specific locations.
What these ancient civilizations did was create a pattern, a pattern that we today are identifying and connecting, forming a massive puzzle, piece by piece.
Many authors wonder if it is possible that many ancient monuments were not placed randomly. 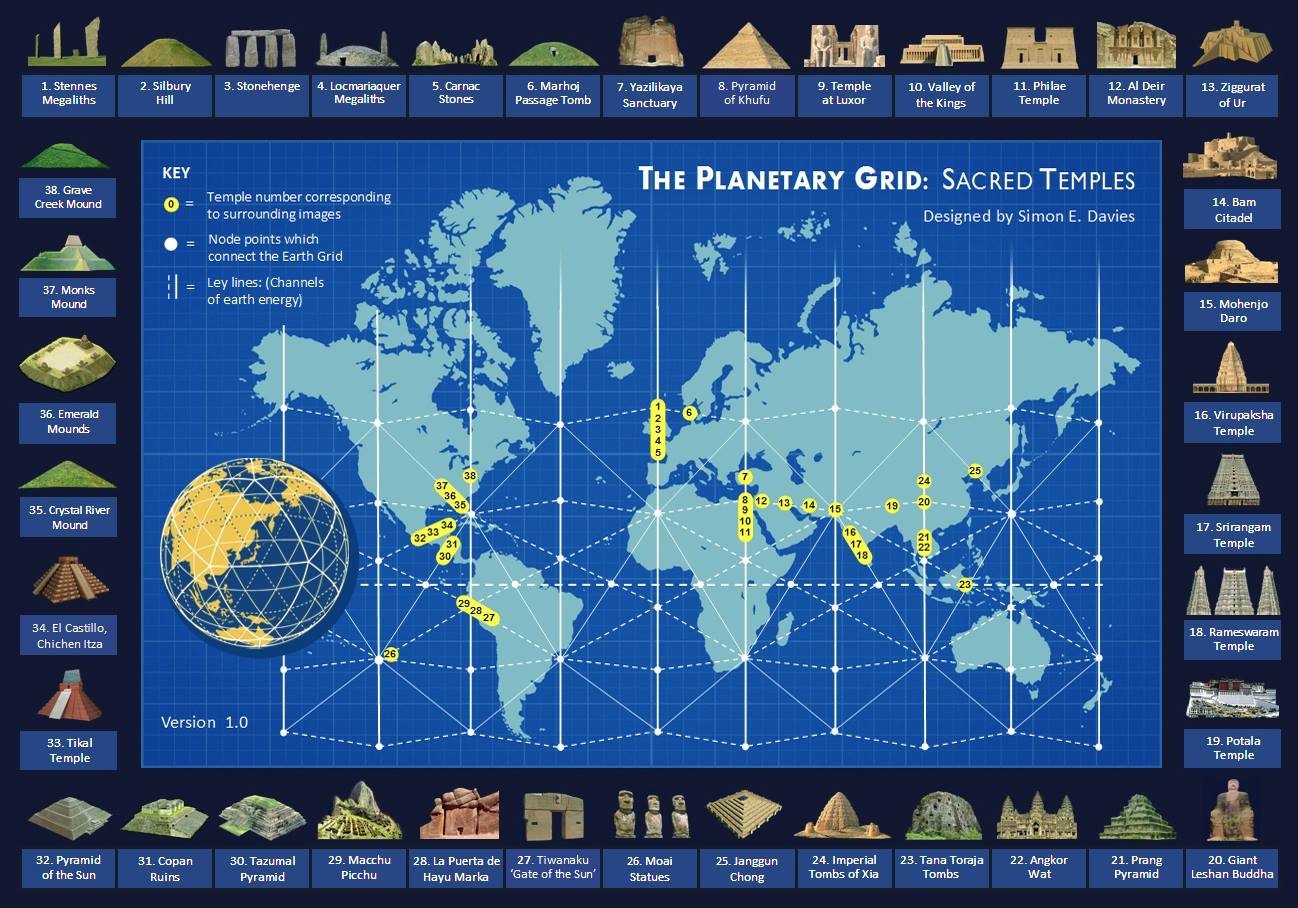 Image Credit: Simon E. Davies.
Some authors are convinced that that embedded in these megalithic constructions, there lies a secret code that can explain how, why, and who built and organized these incredible monuments that are scattered across the planet.

The more we research ancient civilizations and their history, culture, and knowledge, the more surprised we are.
The more we find, the more we understand how little we know.
What if the ancient Egyptians did not place the Pyramids randomly? What if Pyramids, temples, and tombs we marked a specific geographic location? And what if other civilizations around the globe did the same? What if civilizations in the Americas and Asia did the same? What if all ancient sites were built with a plan?
Researchers have discovered connections between sacred structures and powerfully charged areas of the globe where the Earth’s electromagnetic energy accumulates.
These locations were important and held meaning to the ancients. But how did the ancients know of these geographic locations?
Ancient astronaut theorists point towards the so-called “world grid” or “The Earth Grid”. This theory maintains that ancient civilizations around the globe, purposely constructed their monuments on energy lines that when mapped and connected create a significant pattern, as if when connected they form a sort of energy web.
The whole idea of the “world grid” is that the Earth is like a huge crystal where the energy flows around through little nodules.
Energy paths intersect and move all over the world.
In fact, before the ancient astronaut theory came into existence, thousands of years ago, an ancient Greek philosopher took the first steps to identify specific locations on Earth.
Plato was one of the first to propose the basic structure of the Earth evolved from geometric shapes now known today as Platonic Solids.

What Plato did was extremely interesting because he described the Earth as being created from 12 pentagonal faces, and 20 vortexes on the surface.
When you take all of them, join them, and go on the map and mark them, you realize that there are geometrical formations that appear among them.
Everything becomes connected.
In fact, Plato wrote that there was a world soul which he described as a sphere that was composed of 120 equal identical triangles.
Some researchers and scientists today believe that this could be applied to the Earth.
Is it possible that hidden in these patterns is a secret energy source?
A form of technology that could have helped the ancient civilizations build their monuments?
A proof that the Earth Grid actually exists and that we can harness energy from it?
Thanks to our advanced science and technology today, we are aware of the electromagnetic field, and certain energies that reside in the earth.
But thousands of years ago, how could the ancients have known this? And if they did know about certain frequencies and energies, did they really build monuments to maybe ‘harness’ certain energies?
What we see today is evidence of a higher consciousness present in ancient civilizations.
It is as if ancient civilizations knew that if they placed their monuments in specific locations they could connect to the so-called energy grid. Many ancient cultures believed that everything would come into flow, if they placed their monuments on specific, planned locations.

This was practiced by almost all ancient cultures we know of. From the Mayas, Ancient Egyptians to civilizations in Mesopotamia and Asia.

OUT OF MIND » CONSPIRACY THEORIES & ENDURING MYSTERIES » HISTORIES MYSTERIES » The Earth Grid: Are Ancient Monuments The Result Of A Global Consciousness?