The megalithic stones of Carnac are a set of stones intricately positioned in Brittany. It is the most extensive prehistoric monument in the world. This megalithic site is believed to have been erected during the Neolithic, probably around 3300 BCE, but some may date to as early as 4500 BCE.
Like extensive lines of penitents, the enigmatic stones of Carnac were positioned in a straight line across the rough territory of Brittany, keeping guard in front of the waters of the Bay of Biscay.
Local tradition has yielded a number of interesting legends about the menhirs.
Although their presence and configuration are truly mysterious, the peasants of the region found a way to explain them. According to a deep-rooted belief, the megaliths are Roman soldiers petrified by God to protect Saint Cornelius, patron of Carnac.
Another one suggests that, at night, the stones come to life and advance towards the sea to bathe or to drink. 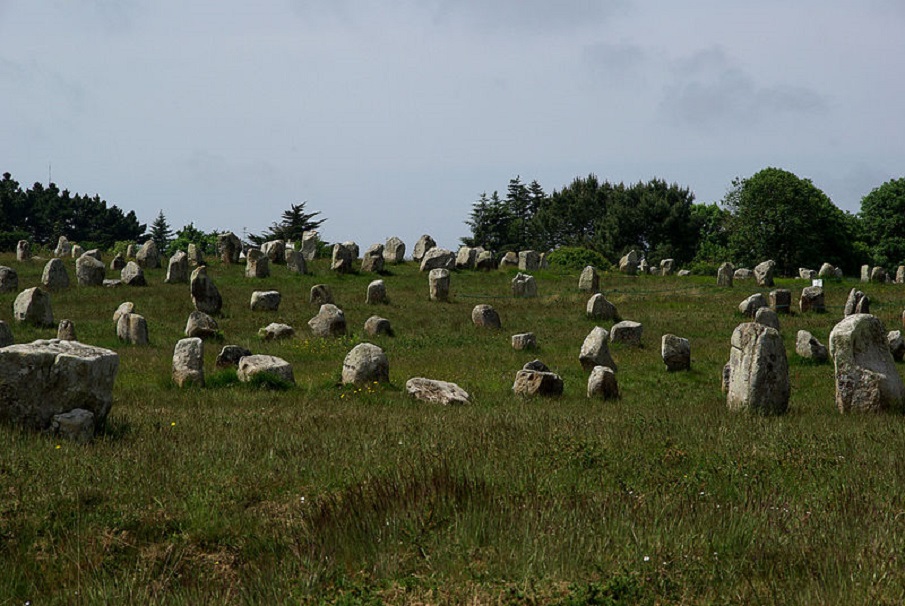 The famous neolithic menhirs near Carnac, Brittany, France. Image Credit: Wikimedia Commons.
They have been credited with healing powers, and it was believed that they could provide fertility and help people who seek love.
The Stones of Carnac are not only one of the most extensive prehistoric monument in the world, they were seeming just as important when they were erected, and evidence of that is the number of stones that were present in the area.
According to experts, when the stones were erected, there were as many as 10 thousand.
Today, after thousands of years, only 3,000 remain, in four large groupings: Le Menéc, Kermario, Kerlescan and Le Petit Menéc.
Next to the village of Le Menéc is where the most numerous alignment begins.
There are 1,099 stones in eleven rows placed mimicking soldiers or schoolchildren, in order of height: the largest measure 3.7 meters and the smallest only 90 centimeters.
They were positioned facing northeast in gentle undulations along a slightly curved line.
The Kermario megaliths are larger, with megaliths exceeding 7 meters in height and decrease in size over an area of 1,200 kilometers.
The other two groupings are smaller, but Kerlescan differs by a square configuration of the 540 stones that compose it.

Jerome Penhouet proposed, in 1826, that the four alignments of Carnac were part of the body of a massive snake that was depicted on the lands of Brittany.
However, different eras produced different theories trying to explain the mystery behind the stones.
During the nineteenth century, it was suggested that these were places dedicated to the solar and lunar cult, while other authors thought that they were avenues that led to the temples that have now disappeared from sight.
Atlantean remains?
Hans Hirmenech suggested that the rows of menhirs were the tombs of Atlantean soldiers who had died during the Trojan War.
Also, James Fergusson proposed that the erection of these monuments should commemorate a sort of great battle that took place in ancient times.
Other scholars who studied the megalithic stones went further and proposed that they were true tombs and believed they found support for this reasoning in the meaning of the names of some places: in Breton, a language of Celtic origin, Kermario means “city of the dead”.

However, when formulating the last theory, it seems that exerts ignored the fact that the menhirs are much older than the appearance of the Celts in this region.
Cosmic map?
The first to allude to the “celestial map theory” of Carnac was André Cambry, who maintained that the stones of Carnac mimick the stars, the planets, and the zodiac.
After Chambry, other authors took up the idea and, in 1970, the English engineer Alexander Thom followed the footsteps of Gerald Hawkins in his studies on Stonehenge and applied them to Carnac.
According to Thom, the great fallen menhir of Locmariaquer was the center of an immense astronomical observatory capable of predicting eclipses.
Their measurements indicate that from this supermassive gigantic menhir it was possible to observe the eight extreme positions of the Moon.
He also proposed that the Carnac alignment were solar calculators, used to correct the irregularities observed in the movements of the Moon.
The immense fallen menhir of Locmariaquer, known as Er Grah (the Stone of the Fairies), measured more than 20 meters in height and is believed to have existed with a combination of other menhirs that are now gone. This massive menhir has an estimated weight of 280 tons.

It remains a profound mystery as to how ancient people managed to move this, and other menhirs to their current positions, without the use of advanced technology.