Design elements present at Göbekli Tepe are also found in Easter Island on the massive Moai Statues, in Tiahuanaco, and other ancient sites around the globe. How’s this possible?
Despite the fact that we’ve studied our ancestors, their cultures, their origin, and their way of life, we have failed to answer many questions related to our past.
The countless monuments scattered across the globe are an ancient message left behind by our ancestors, a message which despite extensive studies, we have yet failed to decipher.
One of the most mysterious ancient temples on Earth is located in modern-day Turkey, more precisely, the city of Urfa.
There, we find an ancient temple complex which is believed to have been erected around 9,600 BC.

Image Credit: Shutterstock
Göbekli Tepe is considered among many experts as the oldest temple on Earth, and despite its importance, we know very little about it.
Not only is this ancient temple complex important because of its age, but it’s also of great importance because by who it was built, and perhaps, even more interestingly, by the symbology it offers.
If you take a close look at Göbekli Tepe, you will notice a curious stance and symbolism that we can find in many other places across the globe.
On Easter Island, for example, we see a great similarity between the Moai and the curious Pillars at Göbekli Tepe.
On both archaeological sites, it seems the ancient builders used the same symbology.

Notice the curious position of the hands. Image Credit: National Geographic.
But is this a mere coincidence?
The Archaeological site of Göbekli Tepe is composed of several temples whose main construction motif are massive stone pillars that range in weight between 30 and 60 tons.
Somehow, thousands of years ago, ‘primitive’ cultures managed to quarry, transport and build something history tells us should not exist.

These enigmatic T-shaped pillars are intricately decorated with depictions of a number of animals such as foxes, lions, snakes, etc.
However, in addition to the various animal depictions at Göbekli Tepe, we see humanoid characteristics depicted on some of the pillars.

Göbekli Tepe’s T-shaped stela display arms and hands belonging to what many experts believe are depictions of humanoid beings.
The ancient builders of Göbekli Tepe carved on the t-shaped tocks long hands and arms of what could also be representations of their gods.
However, this extremely interesting symbolism is not unique to Göbekli Tepe and is found in various archeological sites across the globe.
If we travel halfway around the globe to Easter Island, in the middle of the Pacific Ocean, we see the massive Moai statues and their curious symbolism which is eerily similar to the stone pillars of Göbekli Tepe. 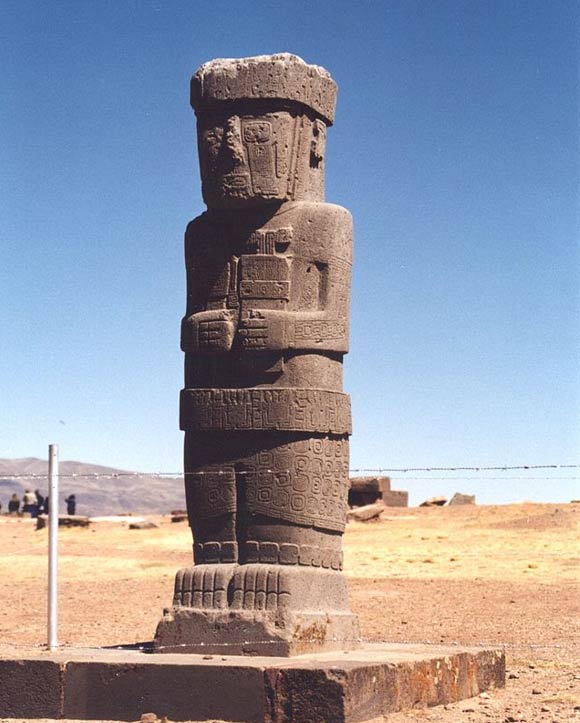 A Statue from Tiahuanaco, Bolivia. Notice the hand posture. Image Credit: Wikimedia Commons.
The massive Moai were intricately carved in a sacred standing position, with hands position on omphalos.
Many authors agree that this posture is meant to portray birth or rebirth.

But how is it possible that such symbolism is present both in Göbekli Tepe and on Easter Island? Is this just a coincidence?
Not likely, as other ancient sites around the globe feature the same thing.
If we take a trip back to Turkey, we will find that the Neolithic settlement of Nevali Cori and Kilisik feature similar design elements.
But that’s not it.
Statues from Tiahuanaco in Bolivia, and archaeological sites in Mexico, as well as Mesopotamia, feature the very same symbolism: massive stone statues and hands coming together.
The question is… what connects all of these archaeological sites, and, is it possible that somehow, these ancient cultures shared a common designer?