Falling UFO Recorded on Video During a UK Storm 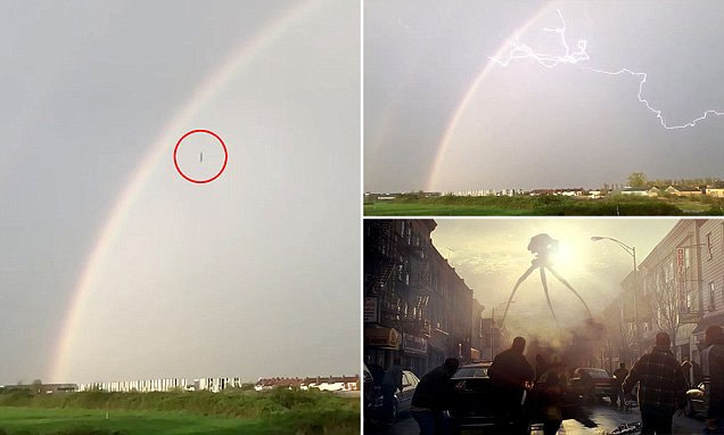 A falling UFO eerily reminiscent of a scene from an iconic movie has been captured on camera.
Source: ​http://www.dailymail.co.uk


A reader captured a mysterious falling object during a storm in Bridgwater over the weekend…
The storms hit Somerset on Saturday afternoon and Megan Taylor caught some dramatic footage of lightning in the skies above the town.
But what she didn’t bank on was captured something else too…
A black object is seen falling from the sky just after a lightning strike.
So far, it remains an unidentified falling object… –[url=http://www.somersetcountygazette.co.uk/news/16178321.Mysterious_UFO_caught_on_camera_during_lightning_s torm/?ref=mr&lp=7]County Gazette[/url]


“Megan Taylor claimed to have captured the moment a UFO was ‘falling from the sky’ during the storm that struck Bridgewater in Somerset.
UFO, bird – or just a smudge on the camera? Footage of a black object falling from a rainbow baffles locals and has War of the Worlds fans excited. Megan Taylor was filming a storm over Bridgwater, Somerset at the weekend . She captured strange footage of a unidentified black object falling from the sky.
The video is remarkably similar to a scene from the 2005 film War of the Worlds. Aliens are recorded in it plunging to earth in dark pods during lightning storms.
AB News
YouTube