OUT OF MIND » CHANGING ENVIRONMENT & NATURE » EARTH CHANGES » What Would Happen If Earth Rotated Backwards?

What Would Happen If Earth Rotated Backwards?

What Would Happen If Earth Rotated Backwards? In other words, what would happen in a retrograde rotating Earth?

Have you ever wondered what would happen if our planet rotated differently? If you have, then a computer simulation may offer many answers to your questions.

A computer simulation by experts from the Max-Planck Institute for Meteorology has revealed what would happen if the Earth rotated in the opposite direction. Experts say that the desert would cover North America and the Amazon, and the greenness would spread in Africa and the Middle East.

In the simulation, presented at the 2018 General Assembly of the European Union of Geosciences, the simulation revealed how deserts would disappear from some continents and appeared in others, while cold winters ravaged over Western Europe. 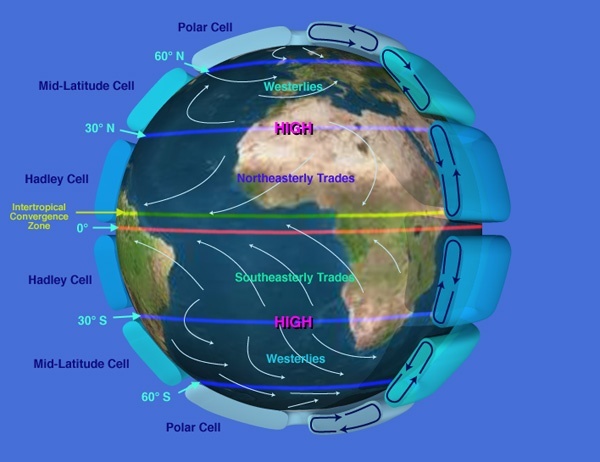 Cyanobacteria, a group of bacteria that produce oxygen through photosynthesis, flourished where they had never before. 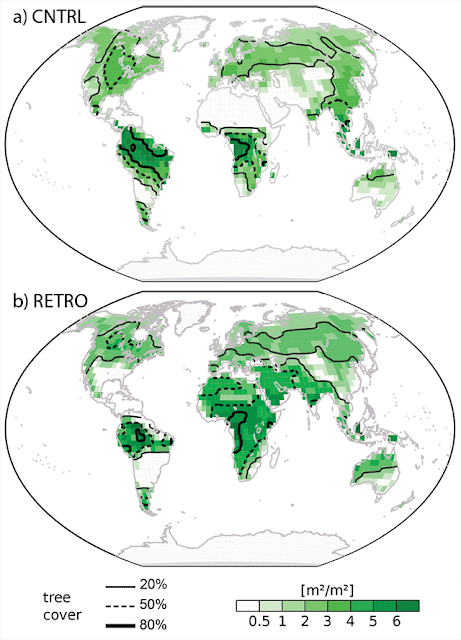 Figure 4: Leaf area index and tree cover for a) CNTRL and b) RETRO. The leaf area index is the ratio between the one-sided leaf surface area in a grid cell and the ground surface area. Notice the greening of the vast desert band in the Sahara and Arabia in RETRO. Image Credit: Max Planck Institute for Meteorology
During the Earth’s one-year orbit around the sun, our planet completes a complete rotation on its axis – going from the North Pole to the South Pole – every 24 hours, rotating at a speed of about 1,670 km / h, measured in the Equator.


Its direction of rotation is programmed, or from west to east, which appears counterclockwise when viewed from above the North Pole, and is common to all the planets in our solar system, except Venus and Uranus, according to NASA.

As the Earth rotates, the thrust and pull of its momentum shape the ocean currents, which, along with atmospheric wind flows, produce a range of weather patterns around the world.

These patterns bring abundant rain to the humid forests or divert moisture from the dry wastelands through rain, for example.

To study how the Earth’s climate system is affected by its rotation, scientists recently modeled a digital version of the Earth by turning in the opposite direction, clockwise when viewed from the North Pole, something known as retrograde, explained Florian Ziemen, co-creator of the simulation and researcher at the Max Planck Institute of Meteorology in Germany, in statements to Live Science.

“[Reverse Earth rotation] retains all the main features of topography as sizes, shapes, and positions of continents and oceans, but it creates a completely different set of conditions for the interactions between circulation and topography,” Ziemen said. 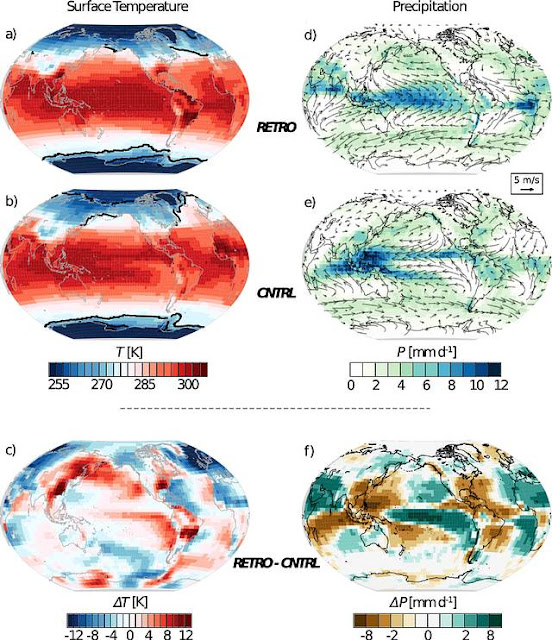 Figure 1: Left column: Annual averaged surface temperature in RETRO (a), CNTRL (b), and the difference between RETRO and CNTRL (c). Black isolines in (a) and (b) show summer and winter sea ice extent. Right column: Annual precipitation and 10m wind in RETRO (d), CNTRL (e), and the difference between RETRO and CNTRL (f). Image Credit: Max Planck Institute for Meteorology
To simulate what would happen if the Earth rotated in the opposite direction, they used the Terrestrial System Model of the Max Planck Institute to reverse the rotation of the Sun and, therefore, reverse the rotation of the Earth and reverse the Coriolis effect, an invisible force that pushes against the objects that travel on the surface of a rotating planet.

Researchers found that a planet like Earth, that rotates differently, was greener. The global coverage of the desert was reduced from around 42 to 31 million square kilometers.

Pastures sprouted in more than half of the old desert areas, and woody plants emerged to cover the other half.

Experts also found that vegetation of this world stored more carbon than our Earth that rotates counterclockwise.

Furthermore, through the simulation, experts noticed that deserts arose where they never had before: in the southeastern United States, in southern Brazil and Argentina, and even in northern China.

The change in the rotation also reversed global wind patterns, bringing changes in temperature to subtropics and mid-latitudes; the western areas of the continents cooled as the eastern limits warmed, and the winters became significantly colder in northwestern Europe.

The oceanic currents also changed direction, heating the eastern limits of the seas and cooling the western ones.

In the simulation, AMOC, the ocean current responsible for heat transport around the world, disappeared from the Atlantic Ocean, but a similar and slightly stronger current emerged in the Pacific, bringing heat to eastern Russia. This was somewhat unusual since a previous study that modeled an Earth that rotated in the opposite direction did not see this change.

“But since AMOC is the result of many complex interactions in the climate system, there may be many reasons for this difference,” the study concludes.

Thanks to Ivan and: https://www.riseearth.com

Posts : 2620
Join date : 2012-01-17
Age : 74
Location : NH
Silly question... IF the Magnetic Poles SHIFT or Reverse as is purported by some who think they know, Does the planet physically Flip end to end or just the magnetic polarity ??  Cause it seems to me that if the planet were to flip and the rotation remain the same, then the view (perspective) of rotation as viewed from above the current North Pole would then be Clockwise not Counter Clockwise and the scenario presented above may have some validity.... otherwise since the concept of the planet just coming to a screeching halt and then changing direction of rotation is complete B/S, WTF was the purpose of wasting all the time, money and energy to come up with this scenario???

OUT OF MIND » CHANGING ENVIRONMENT & NATURE » EARTH CHANGES » What Would Happen If Earth Rotated Backwards?