Latest topics
» We Are Invincible!

Eta Aquariids before dawn May 5 and 6 Image at top: Eta Aquariid meteors over the Atacama Desert in 2015, via Yuri Beletsky.
Before dawn this weekend – May 5 and 6, 2018 – the Eta Aquariid meteor shower reaches its annual peak. Here’s the bad news. A bright moon will interfere with meteor-watching. Here’s the good news. There are some tricks to watching in moonlight. More good news if you live south of the equator … this shower particularly favors the Southern Hemisphere.
It’s true. The moon will be out in force during the prime viewing hours of this predawn meteor shower in 2018. To optimize your chances for seeing meteors, try one or both of these two things. First, try watching in a dark country sky in very late evening, or around midnight, when the moon is either still below the horizon, or low in the sky. You won’t catch as many meteors, but you might catch a few. Don’t know when the moon rises in your sky? Find out with this handy custom sunrise-sunset calendar.
Second, if you’re watching in the prime hours before dawn – when the Eta Aquariid radiant point is highest in your sky, and the most meteors will be flying – try sitting in a moonshadow. That could be the shadow of a barn or large solitary tree or even a mountain, anyplace you can create some extra darkness for yourself while gazing up at an open sky. 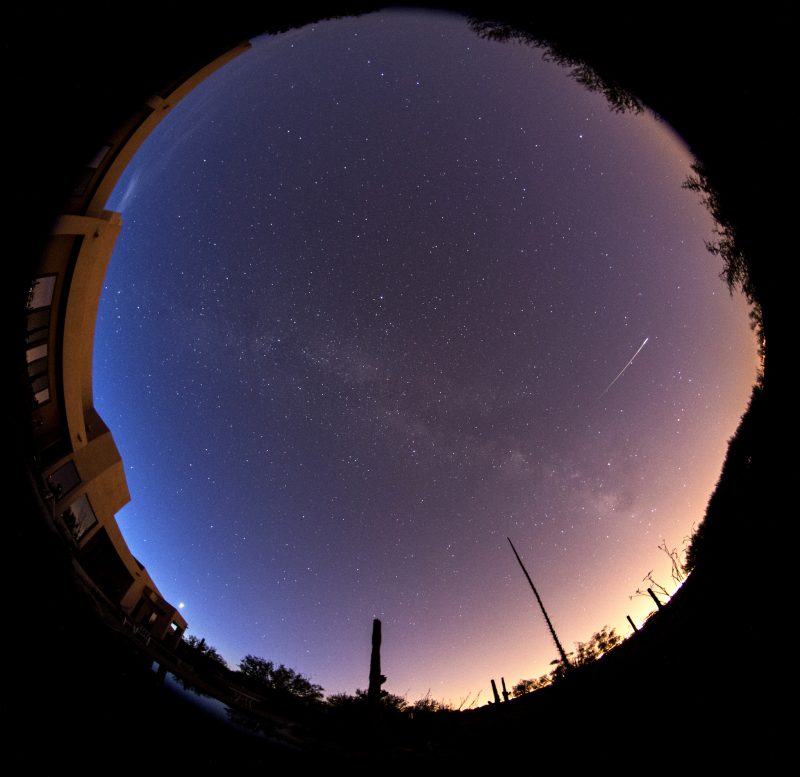 Eliot Herman in Tucson caught this meteor during 2017’s Eta Aquariid shower. He said: “… Got this meteor this morning, predawn, really predawn, just minutes before the light wiped out the camera.”
Under ideal conditions, the Eta Aquariid meteor shower produces up to 20 to 40 meteors per hour. If you’re in the Southern Hemisphere, and you have a very dark sky with no moon, you might see that many in a year when the moon is not in the sky. In the Northern Hemisphere, those living at subtropical and tropical latitudes have the advantage over their more northern counterparts.
North of about 40 degrees north latitude the meteors tend to be sparser. The reason has to do with the time of twilight and sunrise on the various parts of Earth. To learn more, check this post on why more Eta Aquariid meteors are visible in the Southern Hemisphere.
Bottom line: In 2018, the Eta Aquariid meteor produces the most meteors before dawn on May 5 and 6 in the glare of a bright waning gibbous moon.
EarthSky’s meteor shower guide for 2018
A planisphere is virtually indispensable for beginning stargazers. Order your EarthSky planisphere today.


The Eta Aquariid meteor shower reaches its annual peak this weekend. Under dark skies away from city lights Skywatchers can see about 30-50 meteors per hour. It’s hard to say with certainty whether May 5 or May 6 will be the better morning to watch. This shower has a relatively broad peak. Try both mornings. Just remember that – as seen from all parts of Earth – the dark hour before dawn typically presents the greatest number of Eta Aquarid meteors. This meteor shower offers a long stretch of spectacular 'shooting stars' that even a casual observer can spot in the night sky. In 2018, the Eta Aquarid meteor produces the most meteors before dawn on May 5 and 6 in the glare of a bright waning gibbous moon. The Comet The pieces of space debris that interact with our atmosphere to create the Eta Aquarids originate from comet 1P/Halley. Each time that Halley returns to the inner solar system its nucleus sheds a layer of ice and rock into space. The dust grains eventually become the Eta Aquarids in May and the Orionids in October if they collide with Earth's atmosphere. Comet Halley takes about 76 years to orbit the sun once. The last time comet Halley was seen by casual observers was in 1986. Comet Halley will not enter the inner solar system again until 2061. The Radiant Their radiant -- the point in the sky from which the Eta Aquarids appear to come from -- is the constellation Aquarius, the water bearer. One of the brightest stars within Aquarius is called Eta Aquarii, and these meteors appear from this area of the constellation. http://earthsky.org/tonight http://earthsky.org/tonight/star-hop-... Clips, images credit: ESO, ESA/HUBBLE & NASA/JPL Music credit: YouTube Audio Library